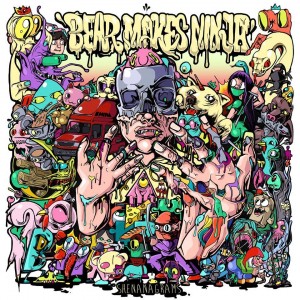 Aiming for making an impression via a huge riff, the album’s opening instrumental ‘Double Twice’ is a genuine cobweb blaster. Following an intro that hints at the band’s complexities via muted guitar strings and a rising volume, Ben (bass), James (guitar) and Karina (drums) soon break into a heavy riff, their sound approximating a heavy post-rock chug, which they’re happy to repeat as often as is necessary. The complex, more staccato riff occasionally makes a play for dominance and adds just enough interest, but the big riff is what leaves the strongest impression – and in terms of first impressions, it’s a job well done. Fans of cleaner guitars and hi-hats should get an instant kick from ‘Aches & Veins’, a track, though complex, is also very melodic. The gang vocals jostle against a deep bass to create a quirky tune, but its upon reaching the chorus that BMN explode into sounds more in line with previous works. The heaviness is impressive, especially the way the wall of sound riff collides with a quirky vocal, but most impressive of all is Ben’s bass sound, which – thanks to a great production (courtesy of Rocky O’Reilly) – never gets lost, despite the guitars having a dominance almost throughout.

The all-round tightness can be heard in an even more direct form during ‘B.F.C.’, a number that showcases a great drum work against some terrific staccato riffs and a surprisingly incessant hook. Almost a throwback to ‘Fruit Can’t Fly’, the punch in their sound goes squarely for the throat, with some quirky, wordless harmonies fighting through. In terms of power and groove, it’s a stand out track, even if it occasionally feels like BMN are reverting to some familiar sounds. Even so, at the climax, it’s hard not to be impressed by the huge guitar tones. ‘Bob’s Logs’, meanwhile, sounds like the love child of a heavy math rock band and ‘Siamese Dream’ era Smashing Pumpkins. The balls of splicing high pitched vocals with a heavy groove signifies BMN’s constant need to challenge, while the repetitive lyric and harmonies creeping in present great math rock tendencies. Riffs, such arty riffs…and a definite highlight; the first stopping point for anyone unfamiliar with the band.

The album’s second instrumental ‘I Ditch Girls Who Believe In Ghosts’ eschews some of the bigger riffs at first, allowing for elements of prog rock to catch the ear; jazzier time sigs and muted strings very much reminiscent of Wot Gorilla? sit against a very pleasing almost dancing bassline before the band explode into a selection of crushing sounds. More melodic than those featured throughout ‘Double Twice’, here the trio are confident in mixing the heaviness with artiness, in a manner which might just interest those who love bands like The Fierce And The Dead. In some ways, this feels like a centrepiece for the whole album, but is quickly outshone by the harmony drenched and rather busy ‘12345’, a track that mixes BMN’s trademark off-kilter voices with a rousing rhythm and eventual crunch that evokes the mood of a Smashing Pumpkins b-side. The heaviness is impressive once more, though not as impressive as James’ multi-tracked guitar work. Thanks in no small way to excessive effects pedals lending an almost phased feel, it’s almost impossible to hear this without being reminded of Billy Corgan’s work on tracks like ‘Silverfuck’ and ‘Jellybelly’. It’s absolutely superb.

‘These Little Snakes’ serves up a great, choppy time signature that borrows influence from post-punk with its Talking Heads-ish business, resulting in a sound that demonstrates the coherence within an impressive rhythm section. In BMN tradition, that’s only part of the picture; the chorus sections – or at least what passes for a chorus – drop into something heavier, before brief lead breaks steer everything to a solid post-rock groove, culminating in one of the album’s heaviest riffs. By the time they’re done, BMN have covered all of their styles – and with ease, too, resulting in a busy yet enjoyable affair. In terms of accessibility vs. complexity vs. riff vs. hook, it all comes together during the title track, in a closing statement that shows off the many talents within this trio. At the heaviest edge, the riff comes surprisingly slowly with a devastating intent, under which there are three part harmonies and an ascending riff in the right speaker channel; at the more reflective end, the lead guitar takes on clean tones and an almost jazzy mantle, as if Wot Gorilla?‘s Matt Haigh has stepped in to add extra flair.

If you liked ‘Shouting at Bridges’, although a tiny bit lighter – and broader – in places, ‘Shenanagrams’ delivers on all of Bear Makes Ninja’s early promises. For fans of arty, alternative rock, this is not to be missed.