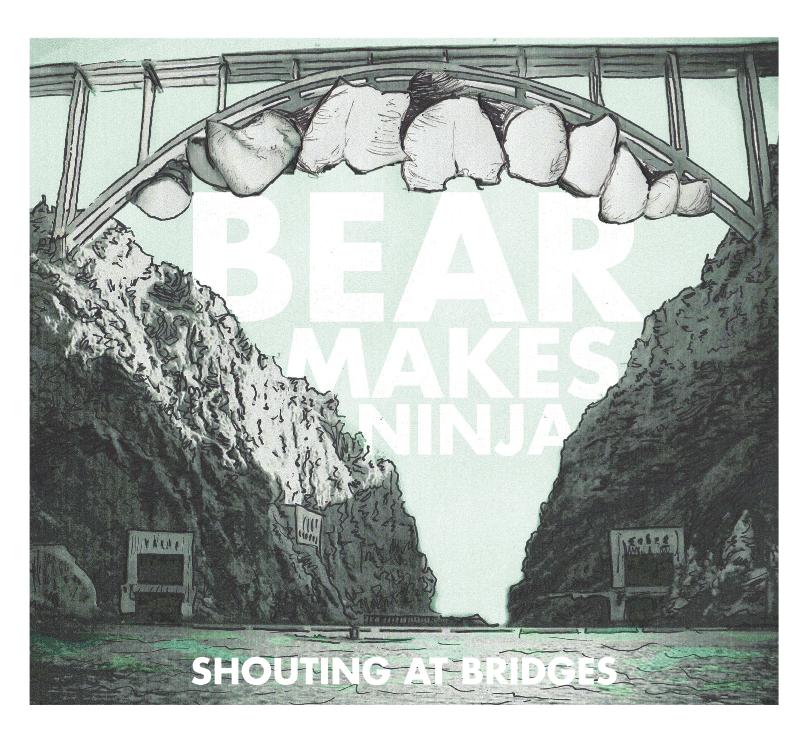 Bear Makes Ninja are a three-piece Mathrock band from Leicestershire.  At the root of the seven tunes featured on ‘Shouting At Bridges’ (their second EP), you’ll find lots of the usual musical complexity associated with the subgenre – the bastard child of alternative rock and progressive metal – but what makes BMN really tick is their love of a heavy riff.

Such a riff cuts through the middle of ‘Fruit Can’t Fly’, exposing a huge admiration for early Smashing Pumpkins.   While there’s very little in the way of a chorus, the push and pull between (almost) harmonious singing and all out shouting holds the attention well enough, while riff wise – alternating between the Pumpkins-esque groove and something much faster – the band show themselves have some decent rock chops.  Digging a little deeper, some of the drum work is of particular note, especially the rather fast hi-hat work.  Overall, this is a fantastic number…especially with the volume cranked; the EP is worth investigating on the strength of this track alone. On the more melodic side, ‘Human-zee’ shows jazzier leanings within BMN’s sound:  the off-kilter rhythm and jazz guitar lines are key here, but although their journey into such territory is enjoyable, it’s quickly apparent that James Palmer isn’t quite as adept at the guitar noodlings as Wot Gorilla?’s Ben Farnell.  Even so, his jazzier chops make a fine base for drummer Karina Lawrence to build a quirky rhythm to compliment Ben Kutzner’s busy bass riffs.

‘Beef Sweets’ pulls Bear Makes Ninja’s three key styles into one short instrumental piece.  A clean guitar riff played with some delay paves the way for an unfussy and rather chunky bass part.  These two elements provide the bulk of the tune, but BMN aren’t quite done: to round things off, another huge riff (of a Helmet-esque chugginess) pulls things to a gradual close.  Perhaps more could have been made of this tune – and the size of that riff in particular – but in terms of simply highlighting this band’s main sounds, it does a reasonable job.

The second half of ‘Shouting At Bridges’ never stretches beyond the musical themes laid down within the first three tracks, but even so, it’s not without enjoyment.  ‘The Duke and The Rogue’ sounds great during the noisier moments, a wall of guitars hinting at influences from Oceansize and Tool, while the shouty, English accented lead voice shows a fair lack of restraint (in a good way); ‘A Welcome Break’s intro includes the EPs strongest drum part – crossing slightly jazz inflected rhythms with a marching solidity.  Both are standout moments that suggest that while Bear Makes Ninja aren’t always quite as consistent as a couple of their peers [namely Tubelord and the aforementioned Wot Gorilla?, both of whom BMN have supported], when those sparks of brilliance are there, this are capable of more than holding their own within a burgeoning scene of mathrock bands.

Closing the EP, ‘Keep Wandering’ is a short, light piece that features a simplistic guitar part with a gentle echo, giving the track a nice live sound.  After a while, a one-line vocal creeps in, with all band members singing off kilter (not quite in a round) and slightly off-key.  While it completely dispenses with Bear Makes Ninja’s metallic oomph and is far from their best tune, it seems like an appropriate way to wind down.

For those who feel largely unmoved by the mathrock movement, as good as they can be at times, Bear Makes Ninja aren’t likely to change any minds.  For those who love a few screamy vocals, huge riffs and aren’t adverse to a bit of proggy twiddling, although ‘Shouting At Bridges’ is a little uneven, there will certainly be a couple of tunes here which rattle the brain cells.