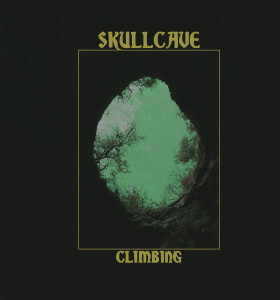 Rarely was a band more aptly named. It takes about three seconds before this second EP from Australia’s Skullcave sets about caving in listeners’ skulls. These guys not only know their way around an enormous riff, but also know how to make the simplest riffs sound truly frightening.

‘Am I Crossing Over’ opens with a burst of black metal drumming and a growling, churning guitar part, before stretching it’s heavy legs into the kind of riff that Cathedral and Witch Mountain would kill for. Liam Young remains in the driving seat with a busy drum part that compliments his own vocal which, during the verses, resembles a post-hardcore shouting rather than the expected deep growl or gothy croon, before the chorus introduces an equally unexpected style – multi-tracked (non)-harmonies, dressed in echoes that suggest dark psychedelia. Between the heaviness and groove, Skullcave prove they’re purveyors of the finest doom and if heaviness is your bag, you’ll be totally sold by the end of this track. Taking their signature sound to even more extremes, ‘Wake Up Wanting More’ showcases an absolutely amazing bass sound. Steve Turnock takes his four strings and literally gives them a death rattle resulting in an approach that in lesser hands could just sound like a booming swamp, but thanks to a superb production job, his bass work cuts through an equally heavy riff and brings a real edge. Meanwhile, the drums are just as powerful, but like before, an interesting approach to the vocal ensures Skullcave sound very different to so many other doom bands. There’s no deepness, no growling; just a clean and almost melodic voice, dressed up with various psychedelic filters. The stark contrast between the ultimate heaviness and a vocal that could just as easily have been lifted from an early nineties art rock band is amazing.

Although the heaviness is of a constant, in song writing terms, things take a quick dive for the next number. ‘Wishing You Went Missing’ spends most of its first half churning an uncompromising riff; it’s a riff that would be equally amazing if the song – or more specifically the vocal – was more sympathetic. As it is, the heavily treated vocals spend most of their time lurching about with a fairly monotonous, dirgy sound. Things improve, though, as the drums eventually dictate an odd bridge that sounds as if a doom band are jamming an ‘Infernal Love’ era Therapy? tune, before the riff drops into something that sounds like ‘Out On The Tiles’ by Led Zeppelin, only about a million times heavier. It’s not that Skullcave can’t opt for the more dirgy and come out with a belter though, as ‘How To Tell You’re Winning’ more than proves. This is a number where they work a slow doom groove to it’s most logical end; the slow chugging not only allowing for Young to indulge in some intense pounding, but also show that guitarist Jay Marriott has a greater set of influences than the music so often suggests. His featured solo during this number showcases a superb bluesy tone as he bends his strings and lays down a strong yet still very dark melody.

Allowing a little respite and almost working as a palate cleanser, ‘Falling’ presents a minute and a half’s worth of reverbed and echoing guitar, the brief instrumental taking on a very shimmery mantle, before the title track crashes in with one final doom riff to savour. On this last crusher, Young smashes his toms and cymbals into oblivion, while tapping into an almost nasal and sneering vocal which – as always – is drenched in echo. The guitars, meanwhile, alternate between a classic doomy heaviness and a sharp almost post-rock twang, which really comes into it’s own during the instrumental break when Marriott offers some sharp shredding that hits the ears with a shrill almost Sonic Youth-esque obtuseness. Stretching that until everything fades out in a squall of feedback, Skullcave make their exit almost unapologetically, with the self-knowledge that for those who truly get them, this EP has provided a thrilling twenty minutes.

With both the arrangements, playing and production sounding like a step forward from their previous EP, ‘Climbing’ shows a band very much in the throes of creating something special. Those looking for more obvious melodies within heavy soundscapes probably ought to sidestep this, but for doom fans, this release represents an absolutely essential listen.