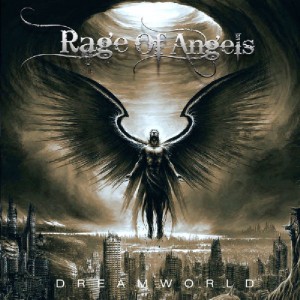 On paper, a release featuring members of Ten, Harem Scarem and Tyketto collaborating with renowned guitarists Tommy Denander, Vinny Burns and Ralph Santolla sounds like a cast-iron melodic rock classic. In theory, Rage of Angels offers seldom more than a bunch of plodding, monolithic arrangements – most of which are at least two minutes too long – with Ged Rylands parping on his keyboard in a very rudimentary manner. It’s also worth noting that most of the guitars were played by Rylands himself, with a little help from Escape’s over-rated go-to guy Martin Kronlund, and between them, they never manage to turn in anything more interesting than a bunch of stilted bar chords – the kind you could learn yourself in a couple of lessons.

The title track leads off with an atmospheric blanket of sci-fi sounding samples and huge keyboards, but it quickly becomes evident that Ryland’s all-star project is not very forward looking, as a big guitar riff straight from the early eighties quickly takes over. This might be okay if the guitars ever stretched beyond those really dull and plodding bar chords. Even a lead break courtesy of Ten’s Neil Fraser does nothing to pep things up, since Ged rather selfishly masks most of Fraser’s playing by placing stabbing keyboards over the top of most of the solo. It’s also worth noting those keys sound like they’re literally being bashed by a rank amateur as opposed to someone who’s supposedly respected within the melodic rock scene. On the plus side, Jagged Edge/Impera vocalist Matti Afonzetti does his utmost to deliver a decent rock performance, but even this seems to play second fiddle to the enormity of what Ryland thinks passes as an arrangement.

Unfortunately, that overbearing (and self-important) approach colours almost everything which follows. Tyketto’s Danny Vaughn takes the lead on ‘Over and Over’ – a more AOR fuelled tune – which fares a little better thanks to a few less keyboards in places and some pleasing key changes which aren’t always evident on many of the other numbers. Although a little more tuneful than most of the Rage of Angels recordings, there’s still no real lightness in any of the performances. The guitar chords may not be quite as leaden, but all the same have none of the bounce that great AOR should always have, while a world of backing vocals seem to get lost in what is best described as a multi-layered swamp. Vaughn’s second appearance (‘Spinnin’ Wheel’) is a bar-room stomper on which his performance lacks the spark of his best work and while the arrangement settles on the near side of embarrassing. Perhaps he signed up for this without hearing the material first? Since this tune – and most of this album – are the dictionary definition of “old hat”, let’s hope so.

Elsewhere, on ‘Falling’, Ralf Scheepers squeals over a meaty Euro-rock arrangement – again fashioned from rudimentary bar chords – with only a few bell-like keyboards providing any real interest. Although these more AOR influenced keyboards are a vast improvement over Ged’s favoured huge slabs of old pomp, he doesn’t really focus on them enough and, sadly, most of the time the tune is marred by a return to overblown pomp and dirge…and one of the ugliest proggy solos since 1975. At five and a half minutes, it’s hard to believe this is one of ‘Dreamworld’s shorter offerings: the full-on sound and bloated, elephantine arrangement makes it feel as if this tune goes on forever. Ralph Santolla lays some guitar over ‘Requiem For a Forgotten Soldier’, a number that may as well have been called ‘Requiem For a Forgotten Tune’, since nobody actually remembered to write or arrange anything decent, while not much better, ex-Bad Company man Robert Hart lends his pipes to ‘Through It All’, a number which sounds like a Ten leftover. The music is overbearingly huge, while Hart’s slightly ravaged by time pipes just don’t cut it any more.

This collaboration only really yields one great song. ‘See You Walking By’ is a classic piece of large-scale melodic rock/pomp. Unlike most of these songs, it actually boasts something nearing a memorable chorus. A tried and tested (but still relatively effective) choir of backing vocalists have thankfully have been allowed room to breathe, while the presence of Harem Scarem’s Harry Hess goes a long way to making this a stand out. Hess is without question the most gifted performer on this release, but on this particular number, Neil Fraser deserves a fair amount of credit too since his soloing is also first rate, filling the last bars of an already decent tune with some nifty picking.

Assuming you’ve not fallen asleep by the end, things pull to a long overdue close with a huge power ballad. Robert Hart makes a second vocal appearance, his scratchy voice sounding pretty ropey pitched against semi-acoustic bar chords and a plodding drum line. The keyboards eventually mask about fifty percent of this already boring tune with an old-fashioned electronic swamp. After what feels like an absolute eternity, ex-Ten/Dare man Vinny Burns appears with a lead guitar break that’s got an enjoyable dirty tone. Much like a couple of Fraser’s efforts, however, it just doesn’t feel high enough in the mix. The incessant dirge of the rhythm is just too distracting for words…and for reasons best known to Rylands, this goes on for almost nine minutes. Yawn.

This really should have been far better than it actually is. Most of it is just really, really dull. Even Danny Vaughn – a man who can normally be relied upon for memorable performances – sounds far less inspired than he should. As previously stated, each of the songs here would have been improved a little if everything had clocked in at about four minutes and yet, Rylands has insisted on a proportion of these tunes stretching out for six or seven minutes. The dragging out of the tunes combined with heavy-handed performances makes ‘Dreamworld’ a difficult listen, even if tackled a few songs at a time. In this case, the whole is certainly not greater than the sum of its parts.