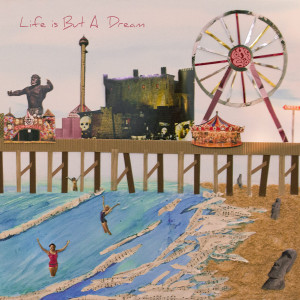 At the beginning of 2015, Philadelphia’s The Soft Spots fused electronica, dream pop and a touch of ukulele twiddling on their debut EP ‘Gently Down The Stream’, resulting in a surprisingly enjoyable listen. Issued a few months later, their follow-up, ‘Life Is But a Dream’ brings more of the same – its five numbers clearly designed to compliment the earlier release.

Showcasing their brand of calypso and dreampop more explicitly than ever before, ‘Between Moonbeams’ sounds like an otherworldly fantasy, where The Soft Spots at first appear as an Hawaiian-shirted lounge band. The uke noodles, they keyboards waver and Shane’s heavily filtered voice create something that sounds like a cross between easy listening and an old 4AD band from the nineties. Oddly, as the tune progresses, it all starts to make perfect sense; the gentle melody is never short of charming, and reaching the mid-point, as the volume increases slightly, there’s room enough for a busy guitar solo. Although fun, it doesn’t quite match ‘Tender Surrender’ for hitting upon that necessary swooning magic, as a pulsing keyboard throws everything back to the late 80s and a shimmering guitar line really pulls in the listener. Spacious and sparse, and yet remaining friendly, this is a great piece of electronica, it’s slow pace placing The Soft Spots somewhere between The Cocteau Twins and Slowdive. By the midpoint, a louder keyboard goes head to head with a thoughtful and measured lead guitar, and as the drums and vocals increase similarly in volume – a choir of voices drawing attention to the hook imploring us to “let the stars be [your] guide” – this slow burning affair could well be one of the best tunes in the band’s catalogue. Not so much for any of the individual elements, but more for the way everything fuses together with minimum effort…and that their sun-obsessed sounds end up, rather perversely, sounding somehow wintery.

To begin with, the upbeat ‘Sunflower Fields’ doesn’t bring quite so much musical interest, having already devoted more of the attention to drum beats from the outset, but as is so often the case, Shane’s hazy vocal stance is on hand to rescue everything. With each passing line, he draws us farther into the band’s slightly trippy land of make believe, via very strong but still wistful melody, it’s slow and melodic approach contrasting the strident rhythms. A funk guitar adds extra colour, tinkling bells suggest a gentle heart, but it’s not until the climax – a retro keyboard line joining a funky bass sound and more of those brilliantly choppy guitars – that everything comes together effectively. By the time it does, there’s a definite feeling that despite early misgivings, subsequent listens could slowly reveal this to a be a brilliant piece of pop. Sci-fi keyboards and a bubbling sound that gives the feeling of drowning opens the appropriately titled ‘Voodoo Diver’, a number that seems to owe as much to the moodier Ultravox as The Cocteau Twins and their ilk. Deep bass underpins a slow unravelling tune, the darker side of the band really hitting the mark. If you like 80s synthpop, there’s much here to love, especially as the dreamy vocal stands up strongly against a slightly drony backdrop.

Bringing everything to a close, the six minute workout ‘Rows of Roses’ begins rather in a rather surreal manner, with multi-tracked voices singing ‘Row, Row Row Your Boat’, all drowned in studio effects. Quickly introducing a heavy programmed drum, there’s a quick nod to homespun techno, before everything settles back into some interesting indie pop. The drum loop continues to be a touch on the obtrusive side, but stretching your ears past that, everything else is lovely. The swirling keyboards occasionally pay homage to the works of Vince Clarke, the synthy bass brings a deep otherworldly tone and occasional steel drums are ready and waiting to remind us that The Soft Spots’ brand of dreampop isn’t quite like others. The vocal adds a strong pop melody, the phased effects highlight the twee, but it’s all rather pleasing – and without the vocal melody to hold it all together, there’s a good chance this could have just sounded like a disparate collection of electronic sounds at times. Although the vocal melody is key, the real star is guitarist Truong Ta, who adds a really distinctive lead, one that so often sounds like bits and pieces from The Cure’s ‘Wish’ album…which obviously can only be a good thing.

Hazy, warm, cold, mechanical and quirky – on ‘Life Is But a Dream’, The Soft Spots stretch out a little farther and introduce some superb guitar tones without harming their original vision. It’s all music you’ll either love or hate in the main, of course, but there’s plenty of heart when they get it right. As a standalone piece, this EP is good, but those unfamiliar with The Soft Spots should go back and listen to ‘Gently Down The Stream‘ first – or preferably approach both EP releases in a back-to-back manner.