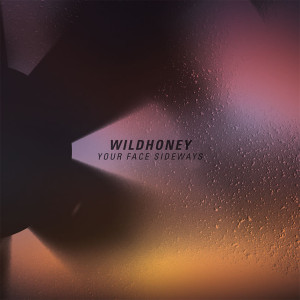 This third release from Wildhoney is very much a record of two halves. Side one finds the Baltimore shoegazers in a fairly poppy frame of mind on five joyous janglers that combine some greatly uplifting musical sounds with a few thoughtful lyrical concerns, while the flip-side is a flip-side in every sense. These two styles ensure that ‘Your Face Sideways’ defies convention by bravely trying to please most fans of dreampop and shoegaze movements in one hit – and actually succeeds. Those who want definite songs get some real belters, while those hoping to lose themselves in an other worldly haze are given ample opportunity as the record progresses.

Instantly lovable, ‘Ceiling Fan’ comes with a breezy, sunny jangle that benefits from a production job that’s fine enough to allow the listener to hear a clear separation between the instruments. This, obviously, makes a change from the usual shoegaze wall of sound or woozy dirge. The rhythm guitars are crisp and bright, the tempo an instant mood lifter, while the bell-like lead guitars top everything with a cleaner and more ecstatic sound. From somewhere within, vocalist Lauren delivers each line with a friendly, typically over-processed tone that makes her sound like a cross between Elizabeth Fraser and The Sundays’ Harriet Wheeler. That’s most of the important boxes ticked right there. The upbeat nature of the arrangement ensures the attention is grabbed from the off and the brevity of this tune – and indeed, everything making an appearance on side one – really helps give the matierial a punchier feel than some of Wildhoney’s more obvious peers. For those who found much to love about alternative music in the 90s, this tune could be a sure-fire classic. Melding a nineties beat with an almost sixties-like twang, lead single ‘Laura’ is a sharp showcase for Wildhoney’s sense of all things melodic, especially given the tight constraints of their chosen genre. Their shifting between a fuzzy riff and very retro sound is impressive, with the sugary pop of the wistful vocal often acts as a great counterpart to the full sound of the music. Moving into the mid-section, the sixties edge takes a firm backseat as guitars launch into a brief distorted shoegaze interlude, ensuring most of Wildhoney’s best traits can be heard in just a couple of minutes.

Taking this blueprint and making it noisier, the distorted guitar work throughout ‘Slow Motion’ gives an idea what J. Mascis might sound like playing a Jesus & Mary Chain cover, while the more woozy vocals, with each line drawn out much farther than before, are on hand to bring something a little more dreamy. In short, this is a track that should interest anyone who ever wished My Bloody Valentine were just a bit more accessible. Revisiting the jauntier stylings of ‘Ceiling Fan’, ‘Hurts To Hear’ opens with a brisk bassline and shimmering guitar that’s not always a million miles away from the work of Johnny Marr and Andy Rourke circa The Smiths ‘Meat Is Murder’, while the louder parts drown out the ringing guitars with a wall of distortion and feedback drones. It’s a superb contrast that gives this track a genuinely multi-layered feel. In a manner too chirpy given the apparent subject matter, Lauren opines that “it hurts to hear your name” with all the friendliness of Miki Berenyi being rather flippant, which is occasionally unnerving. This was most likely the intention – wrong-footing the listener by making them experience emotional upset while simultaneously playing music that should invoke dancing and bouncing around is always effective. Closing side one, ‘Thin Air’ is purest retro of a 1990 vintage. A baggy drum beat sets an almost unwavering groove on the chorus, over which a chunky rhythm guitar churns out a gloriously fuzzy riff. Adding the more interesting sounds, a second guitar lurks in the back, throwing out high pitched lead sounds, with plenty of soaring and string bending, occasionally reminiscent of Pixies, while sometimes bravely adding a few distorted flourishes. During the quieter moments, a great bass sound makes the whole thing seem even more fluid, while the lead vocal, twee, lovely and always melodious, sometimes feels like extra instrumentation in itself. An equal to ‘Ceiling Fan’, this is Wildhoney at their finest.

The aforementioned second side of this release is taken up by a twelve minute epic. Slowly and ominously, ‘FSA II’ begins with a heartbeat and a droning keyboard. Gradually shimmering guitar sounds work a simple melody, churning out the same riff repeatedly with a chord change thrown into every alternate riff. Hearing this, unchanging and unwavering, is like the ultimate distraction: you know there’s more to come…but when? The riff flows and glides, clearly and cleanly, never changing its course…or so it seems. Listen carefully and after four minutes, you’ll be aware of it shifting – almost unconsciously at first, as the extra note is incredibly subtle. With that, one of the guitar chords teases with a little rising distortion and when you feel like you can’t take any more, everything falls away, allowing that riff to do the bare minimum, while the tinkling bells that have always been there largely unnoticed suddenly leap out. How to follow this? Wildhoney firmly decides that the Eno-like approach is best for all concerned and swiftly brings things back to the beginning. Are they just repeating the same structure? Yes and no: it could pass as identical if you’re approaching the piece as ambient background noise, but a keen ear suggests that the guitars are ever so slightly more in the foreground – enough so not to distract, but enough to allow the presence of the almost dreamlike surf chord to be more obvious. At nearly ten minutes in, it’s time to wind up this musical equivalent of drowning, and so, Lauren makes a belated appearance. There are no lyrics here, though, just various wordless cries, with her heavily phased voice adding even more of an other worldly stance.

While in dreampop and shoegaze terms this release doesn’t push any real boundries, it still manages to be consistently strong enough to place itself among the genre’s very finest offerings. Songs, atmospheres, distortion, sweet vocals with an other-worldly haze – whatever their aims, Wildhoney really hit the spot pretty much every time. For fans of the style, ‘Your Face Sideways’ is a must hear.