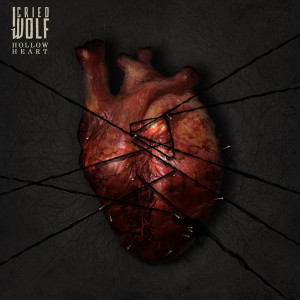 With thanks a hard touring schedule, Oxfordshire based quintet I Cried Wolf found themselves constantly sharpening up their skills until their core sound became incredibly tight. Released just three years after forming, their 2015 release ‘Hollow Heart’ showcases five brilliantly uncompromising works, brimming with alt-metal and post-hardcore attitude, mixed in a way that it sounds absolutely fearsome no matter what the volume.

Driven by post-hardcore thrashing guitars ‘Scratching At My Head With Ink’ shreds throughout two and a half minutes, bringing a full compliment of crunch topped by a throat-wrenching vocal performance. The opening guitar tones promise full-on aggression and – sure enough – we quickly get slapped around the face by a killer downtuned riff and a powerhouse drum sound. Within a minute or so, you’ll be convinced that in punky terms, I Cried Wolf could be the most exciting band since The Computers, but just as you’ve got that sound pegged, they throw in a few unexpected twists. Things slow down, Jacob Rudman’s bass cranks up the tension while the twin guitars wander into a something a tad more trad, wailing with string-bent old fashioned appeal. Then just as quickly again, there’s a beefing up of the bottom end, a hugely unsubtle level of oomph and it’s back into the thrashing. Throughout most of this, frontman Harry Davies screeches and vents in the manner of an early Bring Me The Horizon recording. For those into the post hardcore and metalcore subgenres, this tune is a potential belter. Just as brutal, ‘Masokiss Me’ thunders with a powerful rhythm section, some fearsome distortion and another unrelenting vocal – in all, a great metallic sound – and then, as before, there’s an unexpected twist. In this case, it’s the lead guitar break, which comes with a relatively old-school, fretboard tapped sound that might be more at home in an eighties metal tune. However, like MeVsHero (RIP) before them, I Cried Wolf have the sheer chutzpah to pull off such a mix of styles, and closing with a couple of verses where there’s a strong dual vocal element (the rasping pitching itself against a quasi-melodic harmony) there’s a sense that the band have thought long and hard about the almost cut ‘n’ paste approach they convey. Pretty much every element has been perfected before committing to tape – at this point, if you hadn’t already been, there’s every chance of your being absolutely knocked out by I Cried Wolf’s complex array of sounds.

For more guitar heroics, the incessant lead throughout parts ‘Kenopsia’ makes the number often seem far busier than it is and it’s only once it drops back to allow the downtuned elements to appear more audible that it becomes more obvious from where the root of the groove comes. The dirty, downtuned guitars are rather powerful and border on the superb, especially once the rhythm section decide to push things in a more pneumatic, near djenting direction. Davies, meanwhile, throws himself at each line like a man about to vomit blood he sounds so angry – it’s a fair bet there’s a great deal here to appeal to those who like a bit of Dillinger Escape Plan or We Came As Romans. ‘It Takes a Slave’, meanwhile, shakes things up farther by introducing clean guitars throwing out an almost carnival-like jazz riff which coupled with an equally deep vocal welcomes comparisons with Faith No More. When the riffs take over, there’s a crushing groove with another truckload of downtune, but more impressive still is Rudman’s bass, briefly allowing itself to come to the fore with a superb fat tone. The downtuned riff rarely gives in and brings a world of heavy goodness for the track’s second half, proving I Cried Wolf a real force of nature. Bringing everything to a close, ‘Sharkfeet’ fuses almost math metal jazziness with a Gallows inspired vocal at the outset before settling on a more straight up metalcore assault, but again, each of the five band members are almost equally important to the overall mix. The contrast between staccato thrashing verse and sung chorus is more pronounced, but the all round heaviness ensures everything hangs together excellently.

The heavy combination of post-hardcore and metal, with occasional nods to punk, and an unmistakably British vocal style gives this EP a brilliantly uncompromising edginess. The complexity of the material is such that it takes a while for it all to sink in, but I Cried Wolf’s talents and attention to detail makes a great listen throughout.