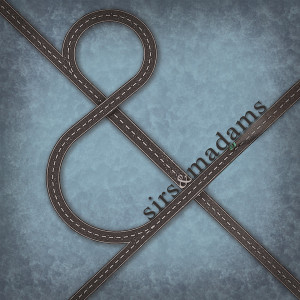 Brooklyn’s Sirs&Madams is very much a band of two distinct moods. On this debut release, when not laying down thoughtful pastel sounds with an alt-folk leanings, they’re tearing it up via some chunky and melodic indie rock workouts. While this perhaps might sound a little too broad stylistically speaking, they have one absolute constant. Whether rocky or rootsy, the bulk of the material is held together by some truly outstanding performances from frontwoman Laura Gwynn. Her voice, a confident, belting array of sounds with a sheer melodic edge cutting through at all times, is one of the finest voices to appear on the DIY music scene for a very long time. It’s one of those voices that has such power, she could sing almost anything and make it sound utterly spellbinding.

With a waltzing time signature driven by acoustic guitar and retro sounding keyboard, the more reflective side of Sirs&Madams really impresses on ‘Washed Up’. Not too far removed from works by Lewis & Leigh, the blending of male and female voices harks back to a seventies cool – with Riley Ziesig’s understated style complimenting Laura’s cry. In terms of performance, it’s flawless…and in terms of arrangement, there’s so much potential here: the bass is unassuming but warm, the drums carrying a natural echo, but it’s those voices that really aim for the heart. Even more understated at first, ‘You Lied’ works a simple finger-picked guitar line against a singular snare drum while the voices whisper gently in union, until the midpoint introduces lovely harmonies and an increase in volume. Naturally, Laura takes this opportunity to harness the belt in her voice and from then on, really goes all out. With the whole band coming together for a touch of retro rock, everyone shines brightly – bassist Julian Applebaum punches out a great rhythmic tune, Riley’s guitars adopt an almost Sun Studios twang – despite the material having a more modern slant and at the climax, Laura carries her lines with such gusto, you know you’re witnessing something special. Elsewhere, ‘Snake In The Grass’ works a superb bassline and spacious guitar work, resulting in a track that’s almost funky. With thick rhythm guitar lines gluing everything together it has a solid musical groove – and the band seems to more than be aware of this fact, filling most of the four minutes in an almost jammed manner; Beyond an opening verse powered by dual male/female voices, Laura is subsequently sidelined to wordless cries and repetition of the title. Even in a more restricted role, though, she still carves out a definite presence. In a live scenario, this is a number with the potential to never be the same twice.

With a slow rhythm as backdrop, ‘He Was’ features an almost smoky vocal during a moody verse, quickly switching to a more upbeat chorus with a very strong melody. In terms of adult pop/rock, Sirs&Madams sound like a seasoned band here, churning out music that could equal most of the tracks from the critically acclaimed ‘Under The Blacklight’ by Rilo Kiley. Also tapping into some great radio-friendly sounds, ‘Surrounded’ has a breezy sound – kind of a Rilo Kiley/Hush Sound hybrid – showcasing another slick arrangement, juxtaposing pop-ish sounds with a brief distorted guitar break and a busy piano. The kitchen sink approach does not hide or distract from the fact that the number represents another excellently written number from the outset. In contrast, ‘Don’t Let Me Know’ – a number bringing guitarist/vocalist Riley into the spotlight – has an almost southern and bluesy edge to the vocal, even if the music doesn’t always follow suit. A great production job allows each of the instruments to be heard in absolute clarity while a bass solo tops everything with a real sense of style.

Pushing forward the rocky side of the band, ‘Muddy Water’ is an instant classic. The jangly guitar sound – loud, but never overbearing – instantly calls to mind the greatest Sean Slade & Paul Q, Kolderie productions at Boston’s Fort Apache Studios (home to Buffalo Tom, Blake Babies et al), delivered with a 90s passion. Laura’s vocal adopts accordingly, with breezier overtones on a hooky chorus, but it’s the rhythm section who truly stand out. Drummer Cody Beusing really goes to town on the hi-hats while Applebaum punches through with an almost staccato approach in places. Even a couple of discordant notes can’t knock this one from being the album’s instant standout. With a more measured approach, the blues-edged ‘I Don’t Ever’ channels Jack White as a fat bass pitches singular notes against the heavy drums – slow and methodical being order of the day. With an almost gravitational pull, unashamedly retro, it’s guaranteed to impress any listeners keen on blues-rock revivalism, especially once Laura hits her stride, pushing her voice from an impassioned cry to the kind of volume that could rival the likes of Susan Tedeschi. It doesn’t push any new musical boundaries, of course, but from an independent band working at a grass roots level, it’s absolutely first rate stuff.

This is one of 2015’s best discs by some margin. The eight songs show both sophistication and variety with regards to songwriting, the musicianship is mostly straight-up top drawer stuff, while Laura’s voice is rarely anything short of astounding. Sirs&Madams are the whole package…and then some; you’d be an idiot to pass this by.