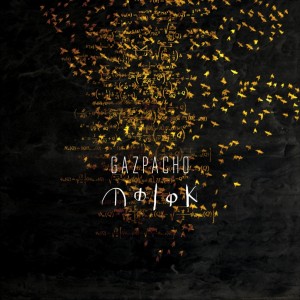 This obtuse quality makes no haste in presenting itself either, with ‘Park Bench’ beginning with a heavily treated drum sound, slowed down a few notches and overlaid with reverb. It’s like hearing bits of Hendrix’s ‘…And The Gods Made Love’ played against Nick Mason’s ‘Grand Vizier’s Garden Party’. Possibly fitting for the start of a concept album that looks into the idea of a universe without a guiding spirit, but that doesn’t necessarily make it easy to listen to. Following this with an almost unaccompanied vocal – those drums returning for punctuation, then adding harspichord floatiness, – the band pulls the listener farther in to a dark, spinning vortex of bleakness. Even when a melody is settled upon, aside from a great bass sound, it rarely feels like more than a collection of disjointed tinkles and drones at first. The slow and atmospheric arrangement, meanwhile, eventually sweeps into a spooky world of deep guitar chords, quasi-medieval keyboard lines and strident rhythms. The sweeping style revisits a few sounds familiar from the world of ‘Demon’, though are by no means reliant on mere recycling. The drums tap into something militaristic, the belated introduction of a heavy guitar chord does little more than highlight the production values aren’t always as sharp as prior Gazpacho discs, while over this, Jan-Henrik Ohme unleashes his inner Thom Yorke; his voice three parts atmopheric belt and one part European folk wail and as the track reaches an almosr waltzing climax, this has proved a most interesting opener. ‘The Master’s Voice’ loses a little of this early momentum, choosing instead to open with the sound of keyboard bells and disjointed rhythms, with only Kristian Torp’s grumbling bass providing anything of lasting interest. The vocals, still intent on delivering everything between a wail and warble are deeply unsettling, and despite Jon-Arne Vilbo’s best attempts at linking things with some classic prog rock guitar lines, his instrument is so buried within the a swampy mix, his best efforts lose out to a booming rhythm section. There are many places where this track feels like a linking piece, a stepping stone to something grander, and then Gazpacho take a swift left turn…

It’s only with ‘Bela Kiss’ things start to sound upbeat, but even then, what ensues isn’t the easiest of listens. An off-beat time signature dictated by piano allows for a terrific dancing bassline, with Ohme’s voice finally sounding more natural and ease with the music…and just as you find yourself potentially enjoying the groove, Gazpacho throw it in your face and abandon everything for a full on folk jig. All accordions and leiderhosen, hearing this, it easy to imagine beer drinkers and fire-eaters aplenty, though situated between the darker tracks as it is, it’s merely seldom more than a distraction. ‘Know Your Time’ reintroduces deep drum sounds and even deeper bass rumbles during an intro that sounds like a Pink Floyd soundtrack from 1969. Where Gazpacho will take this – especially given wilfully obtuse sounds of the previous tracks – is anyone’s guess at first, but thankfully, at this point (having already frightened off about seventy percent of their potential listeners, leaving only the hardcore fan) they wisely decide that a strong melody might just be a good idea. Those who like the proggy aspects of ‘Night’ and ‘March of Ghosts’ will find this number very enjoyable indeed. While never reaching the heights of classic Gazpacho, the signature elements finally remind everyone why this band are worthy of an ear: the bass work is complex, but thankfully more fluid; the combination of bottom end and droning keys captures the essence of post-80s prog excellently, the guitar lines switch between chiming notes and soaring leads with a sense of class. Linking everything, Ohme’s vocal, while remaining in the acquired taste bracket, finds a much needed softer edge. Placed against the album’s best arrangement, he’s emotive without being too theatrical, and thankfully, he’s reined in the shrillness that marred those earlier numbers. By the second half, where almost tribal drumming powers against a dirty guitar line, there’s no question of this being ‘Molok’s finest moment.

‘Choir of Ancestors’ doesn’t as much take a step backwards melody-wise as a sideways head first dive, as Ohme places the warblier side of his delivery against a strident piano, the effect much like enduring an overwrought Eurovision piece. The percussion sweeps in with more tribalism, at first interesting, but quickly dull and repetitive – we’ve certainly been here before, it’s almost as if Lars Erik Asp had a brief to only play in two styles throughout the whole album… Shifting back into the main melody, however, everyone sounds tight enough and a featured solo nods towards a classic prog atmosphere. Another busy piano line and off-kilter time sig provides the heart of ‘ABC’, an interesting offering that all together sounds more positive. Throughout this track, Asp finally shows his full range of talents playing something that features both rocky punch and jazz inflected rattle, and his presence against the piano riff gives ‘Molok’ it’s most distinctive and pleasing arrangement. Maybe the pleasure from this comes from its brevity; with only three and a half minutes to play with, Gazpacho never over-egg their musical pudding and sliding between this busy verse and a slow, methodical refrain with warm bass, it’s constantly entertaining. Hold on to that feeling, though, as it’s merely fleeting… Feeling like things have become too elated, ‘Algorithm’ starts out as little more than a minor ambient drone, bringing the mood crashing back to earth. Taken on face value, though, it soon blooms into a fairly enjoyable instrumental, which although relies a little too heavily on an overly familiar musical theme, is home to a superb bassline and a few more melodic touches. Reinstating some of the cold front, ‘Alarm’ works around loud vocals and harsh synths, and it’s only with the introduction of minor key piano chords nearer the end things get in any way interesting. In terms of performance, it’s Ohme’s strongest for this set, but song wise, again, there’s nothing overly memorable here during early listens. A moody affair – much like Marillion‘s ‘Memory of Water’ and your average Alcest offering – it’ll take time and patience before the potential magic sets in…if indeed it ever does.

Finishing with the title cut, the gloves are off in terms of all round darkness. The bottom end is fierce – or as fierce as something decidedly swampy gets – the violin punctuates with pizzicato quirks, and the vocal mumbles something that sounds like the freaky offspring of an age old folk melody and an incantation designed to raise the dead. It’s more interesting than the three pieces at the start of the album, but in terms of all-round listening thrills, it’s dangerously close to being absolute dreck. Maybe that’s the point: Gzpacho want you to feel uneasy, to challenge and push boundaries. What we essentially have are nine minutes of slow and moody soundscapes that threaten to do something, but beyond Ohme’s quasi-chanting somehow never get around to it. The shimmery guitar lines are thoughtful and the bendy bass adds an otherworldliness, but there’s a distinctly bleak feeling that always offsets anything interesting. This might be the king of downbeat and moody album closers.

First time listeners should steer very clear indeed, and those who still love ‘Plague of Ghosts’ and earlier Gazpacho are in danger of being left behind once more, with only ‘Know Your Time’ and ‘ABC’ providing the strongest links with the band’s more accessible material. The jury’s truly out as to how much of Gazpacho’s more committed fan base will take ‘Molok’ to their hearts in the long-term. Those who disliked ‘Demon’ for being too slight, meanwhile, might just welcome the darker elements here, but there’s just as much chance of them abhoring this album for being hopelessly self-indulgent. There are some strong musical ideas scattered throughout the hour, but with a recording that might become the Gazpacho equivalent of ‘Radiation’ (Marillion’s fan-polarising and controversial offering from 1998), you’d best be prepared to really work to reap the musical rewards.