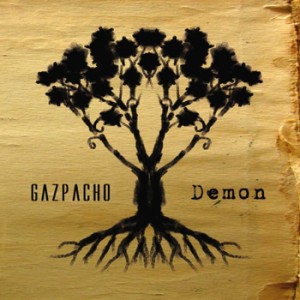 As you may expect for Gazpacho’s choice of head music, the band makes no attempt to aim for an “instant wow”, preferring instead to leave us with a dark and occasionally minimalist piece that takes a long time to unravel; an album that takes time and patience to gain the listener’s true admiration.  In this very spirit, the opening number, ‘I’ve Been Walking (part 1)’ couldn’t start in any more of a low key fashion if it tried.  Intermittent piano notes creep slowly, accompanied by a very hushed vocal from Jahn Henrik Ohme, giving no real indication as to where this may be headed.  The guitars make a brief appearance after a couple of minutes, throw out a few meaty chords and then slunk back into the shadows, feeling their presence here is not necessarily required.  With the addition of keyboard sounds evoking old-school prog, plenty more piano and even more atmospheric vocals, Gazpacho tap into sounds that are, perhaps, even more cerebral and slow-burning than anything they’ve dished up prior to this release, but the very understated approximation of tunes akin to The Pineapple Thief and touches of Radiohead suits the Scandinavian band well.  During this epic opener’s second half, the rock elements flourish: accompanied by meaty sounding guitars, but in proper prog tradition, the more interesting music can be heard beneath the surface.  In this case, bassist Kristian “Fido” Torp busies away, his nimble fretwork constantly giving the louder parts of the music something from which to bounce.  As the tune pulls to a close, Gazpacho go all-out for unashamed atmospherics with almost two minutes of wind sounds, droning cello and a haunting violin – the end result not so far removed from ‘Golem’ from their 2012 outing ‘March of Ghosts’.  The second movement of this particular piece (sequenced on the album as track three), expands on the heavier parts heard here.  The fuzz bass is fantastic – a perfect foil for the many spacious, almost Harold Budd inspired piano notes – the heavy drones pulling against the slowly realised strings and intermittent piano.  For those who like dreamy, ambient musical themes in a neo-classical vein, the extended instrumental section bridging the two heavier sections will be a highlight, delivering atmosphere aplenty.  Meanwhile, although he maintains a strong vocal presence with an effortless delivery, whenever Ohme appears, there’s often the feeling he is in the way, since the music is so, so good.  So good, in fact, that ‘I’ve Been Walking (part 2)’ could rank among Gazpacho’s best tunes.

In a more upbeat style – upbeat being relative – ‘The Wizard of Altar Mountain’ shifts from moody and ambient into electronic and clanky.  The basis of the tune sounds vaguely oriental in passing, like something from ‘Tin Drum’ by Japan, before other embellishments bring a very European flavour.  The slightly fey lead vocals evoke the better stylistic choices of Tom Yorke, resulting in something surprisingly accessible and, again, potentially comparable to The Pineapple Thief.  At the point it seems as if you’ve got a handle on things, the original themes fall away to allow a Baravarian folk dance to play for the rest of the number.  While there are elements here easily recognisable as Gazpacho, there’s a clear sense of the band always looking to branch out.  On first listen, their fusion of progressive rock and trad-folk seems surprising; on subsequent listens, given the very string-led tones of parts of ‘Demon’ as a whole, it makes sense.  You don’t get that kind of inventiveness from an Arena album…

With the arrival of the fourth part of this musical suite – ‘Death Room’ – the almost oriental world music parts of ‘Wizard’ make a timely return, playing out a circular motif, over which other strings buzz and scrape.  Filling the gaps in this disjointed scenario, the bass dances beautifully, providing the most musical focus, while the Thom Yorke-esque vocals add farther to the haunting tones.  While some of the drum fills provide some of the album’s most “rock” edge, they never seem tempted to fill too much of the backbone – rising, falling, rising, absent…crashing in at unexpected moments – in this sense, Lars Erik Asp’s playing hints at Nick Mason’s (circa ‘Meddle’).  There are other Floydian touches too – especially in the way the bass briefly falls into an ‘Echoes’ styled funk in the mid section of this eighteen minute tour-de-force.  It’s not especially Floydy in its overall outcome, of course, but far more in keeping with a twenty-first century take on progressive themes. Gazpacho fuse Radiohead styled moments with a 70s eye seamlessly, before delving back into something closer to European folk music, before finishing up with a proper rock crunch delivered by a combination of chugging guitars and mellotrons.   It’s one of those musical epics where you’ll uncover something new with every listen, and each listener will have a different view on what actually works (or doesn’t) – but whatever your preference, there’s so much here for prog fans to get their teeth into.

Haunting and surprisingly low-key in places, ‘Demon’ is a superb work. While sections of Gazpacho’s music still displays obvious influences from certain quarters, unlike fellow prog-rock Scandinavians Airbag, they are always more likely to use these influences to create something very much of their own. In many ways, picking out great moments of ‘Demon’ is a fool’s errand – it’s absolutely essential to listen to the whole to gain the full effect of the band’s grand vision. It’s not as easy to get into as of a couple of their prior releases, but like Marillion’s ‘Brave’ and the average Flower Kings album, it’s sense of scale will bemuse some, while absolutely flooring others.  It could be Gazpacho’s defining work…it certainly cements their place as one of the world’s greatest cult prog bands.