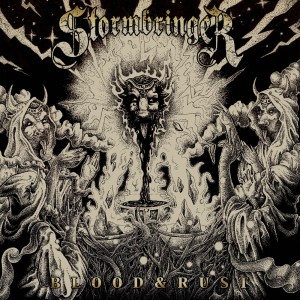 Nottingham rockers Stormbringer worked hard to promote their debut album ‘MMXIII’ with a slew of gigs, including appearances at the renowned Bloodstock and Download festivals. At the point where they were really gaining momentum, vocalist Mike Stockley moved on. His replacement, Jimi Brown was an instantly good fit with the band, his voice – occasionally sounding like the Whitfield Crane of Ugly Kid Joe tackling something more in the classic rock mould – is suitably powerful enough to make his presence felt over Stormbringer’s monster riffs. …And if it’s riffs you came for, then – even with an important change in band personnel to contend with – ‘Blood & Rust’ really should not disappoint.

Slowly building an atmosphere, the title track grumbles with some dirty guitar work by way of an album intro, before ‘No Redemption’ really cranks the volume and shows what these guys are made of. Like Trouble back in the 90s, this number has an impossible level of swagger and a slightly Sabbathy tone – circa ‘Sabotage’ – on the main riff. That alone should be enough for you to make a snap judgement on how much you’ll love love this track (and album), and then Brown steps up to the task of making his presence felt as new guy…and as he wraps his curly delivery around the melodic vocal line, he sounds truly at ease. Shifting into a twin lead that shamelessly borrows from the Kiss classic ‘Detroit Rock City’, the whole band sounds like they’re having a superb time and upon reaching a corker of a lead break courtesy of Ash Smith and Dom Wallace, it’s more than obvious these guys are strong players.

There’s a touch more variety as the disc progresses, too, and all without losing too much of the band’s signature groove. ‘Rise’ gets a kick up the arse with some heavier drumming and stodgy twin lead work that borders on the sounds of ‘Persistence of Time’ era Anthrax in places, before dropping back to reveal (and revel) in more meaty mid paced chops. Again, Brown shows off a powerful set of pipes, the featured solos are first rate and – so not to feel short changed after the intro – drummer Jon Paul Quantrill occasionally raises everything with some mean double bass fills. Mixing heavy melodic chops with a slightly glammy touch, ‘Bad Blood’ brings a more obvious hook thanks to some shouty gang vocals and a big riff that sounds like it could have been a little more than inspired by Skid Row’s ‘Get The Fuck Out’. All plusses for the chosen style of course, while ‘Over The Edge’ trades in the early nineties hard rock sounds for something a little more alternative, with slow riffs powered by some guitar on the verse and a slow post-grunge grumbler of a chorus that wouldn’t have been too far out of place on Dokken‘s ‘Shadowlife’ album. Brown lends everything the necessary levels of melodic flair, much as before, with a crying voice that gains most influence from somewhere within the late eighties/ early nineties divide. A bridge section makes things feel even darker, but here bassist Darren McCullagh steps from the shadows to show off a deep rattle that clearly accounts for about fifty percent of Stormbringer’s brilliant heaviness.

A touch less instant, ‘Ashamed’ works itself around a twin riff with a muddy sound, as buzzing guitars collidie with double bass drums, often bringing a confrontational sound but no real groove. Occasionally something with a bit more swagger takes over, but it’s soon sent packing by a barrage of drums. It’s not the worst thing within the Stormbringer catalogue, but they’re capable of so much better. Thankfully, in terms oi that all-important riff, ‘Cross To Bear’ more than hits the spot, with a faultless opening riff that sounds like a hybrid of Anthrax and a groove metal outfit, following that with even more dirty grooves and a succinct and unfussy lead break with an eastern tone. Even with the shifting time signatures, the vocal never loses any of it’s overall power and throwing in a reasonably strong chorus, this is a number that potentially stands out as an ideal track for first time listeners.

Closing the album is an unlikely cover tune. Given the general stomping nature of Talking Heads’ ‘Psycho Killer’, it’s a wonder that more bands haven’t tackled it, but halfway through Stormbringer’s heavy handed take on it, it’s fairly obvious why. Tina Weymouth’s pumped up bass is reworked in a much heavier style and the accompanying guitar crunches with ease, but a verse and chorus in, it just feels laboured. It takes more to make a great cover tune work than merely heavying it up for heaviness’s sake – as Stormbringer have done here – and with every passing minute, the general lumbering qualities become more obvious and by the time they top it all with a shreikingly eighties guitar solo, it’s firmly shifted from the “could be interesting” camp to “could have been better” to “shouldn’t have bothered”. Part of the problem is that it jars a little against Stormbringer’s original material (most of which is excellent) and tacked on the end of the album as it is, it feels like an afterthought. It might sound better in the live set, but in all honesty, it has no place here.

Cover tune aside, ‘Blood & Rust’ is a top notch listen. It has much to recommend the Rival Sons fan looking for something with a bigger crunch, or the Black Stone Cherry devotee looking for more straight up riffery with a slightly different kind of old fashioned lilt. There are no shortage of genuine bone crunchers here – great production and greater arrangements make for some of the best riffs at the time of the album’s release. The band’s advice is to put it on and play it loud [sic] and they’re probably right, too. Sometimes the simplest approach to enjoying rock music is what’s called for and ‘Blood & Rust’ is one of those albums that sounds all the better for a bit of extra volume.