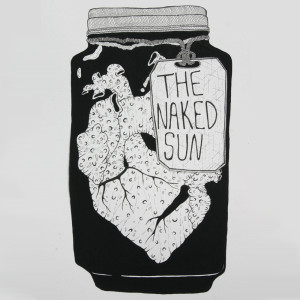 At the end of the first quarter of 2013, underground Americana band The Naked Sun dropped their first studio EP, ‘Space, Place and Time’, a brilliant mix of sounds that borrowed heavily from Neil Young and Wilco, with passing nods to the quieter strains of The Great Affairs and The Grateful Dead.  In terms of blending classic Americana sounds with a little psych and a pinch of rock, it provided a great – if all too short – listen.  Two years on, ‘Pickled Hearts’ picks up where the first EP left off, and for those who enjoyed their previous slice of slow-burning Americana, it will not disappoint.  In fact, there are a couple of numbers where the band shows an increased confidence in their abilities; thankfully, though, any improvements are not made on a sonic level.  Recorded live in the studio, ‘Pickled Hearts’ provides another brilliant glimpse of the band’s warts ‘n’ all style.

The opening track ‘It Will’ really hits the mark – and is potentially the best Naked Sun tune at the time of its recording.  The opening chords emerge with a wistful air, like a lo-fi imagining of Radiohead’s ‘Fake Plastic Trees’, before a classic sounding harmonica line pulls everything firmly into Neil Young territory (circa ‘American Stars & Bars’).  From that moment, fans of the style are likely to feel the tingle of something special, but as the rhythm section marks its place, things only get better.  Such a measured performance, the combination of live in the studio drumming, a very understated bassline and crisp but sorrowful guitar lines present something utterly captivating; something far better than the previous EP even suggested.  As the band rise to the inevitable climax, the guitars pull back from the expected Crazy Horse freakout, instead preferring a little spacey noodling, while Drew’s lead vocal cries the title with a real passion.  Combining a clanging guitar and old-school organ, ‘P.O.O.R.’ combines a very roots rock feel with a slightly distorted edge. The individual elements are great: the featured lead guitar has extra attitude due to a heavy use of wah-wah and eventually offers a brief but full-sounding solo, the bass is high in the mix – Ken proves himself to be a very solid player, alongside drummer Dave, always ensuring the beat is steady. Although this number is among Naked Sun’s more ordinary, it brings some Wilco-esque entertainment.

Dropping the hazy edge and going for a more country vibe, ‘Silver Rings’ is wondrous in its simplicity. The live in the studio set up allows the snare drum to rattle in a way that brings life to a fairly basic arrangement; the acoustic guitars strum casually and vocalist Drew tackles each line with a drawl that makes him appear like this has been recorded at three in the morning.  What really lifts this number, though, is the steel guitar crying throughout – its presence in the right speaker channel holds everything together admirably.  If alt-country isn’t your thing, there’s nothing for you here, but it would take a hard heart not to love the feel of ‘Being There’ era Wilco, performed with such a natural and unfussy beauty.  Going for a full on country shuffle, ‘Blue Green Blue’ retains the brilliant rattling snare and steel guitar, with the bass marking time and the acoustics shifting between tough strumming and twangy solo work.  Although the early Wilco comparisons could be easy made once more without fear of labouring a point, this appears to have a much older spirit – not unlike a less syrupy reworking of a Gram Parsons ballad.  Here, we get to experience The Naked Sun at their purest and hear how much love they clearly have for this timeless style…and it’s just wonderful.

With a blend of organ and bass powering a driving pop-rock arrangement, ‘Waitin’ In Line For The Ferris Wheel’ occasionally sounds like Nashville’s alt-country/roots rock troupe The Great Affairs, though with a stronger leaning towards something a little groove-led.  The guitar lines are raw but integral to the overall picture, the vocals a little lazy.  In this respect, it’s easy to see how this might have come together as part of a jam session, but the sharp organ work throughout always ensures things never become too sloppy. Capturing the rockiest side of The Naked Sun, ‘Land of Pure Imagination’ presents something that could easily be a different band of musicians. Thundering like a cross between a Soul Asylum demo and a solo recording by Grant Hart, the guitars have a consistently choppy approach and it’s clear these guys are enjoying getting a little more raucous within their studio space.  More “Minneapolis sound” than alt-country, things really start to cook once Tim launches into a busy guitar solo and Drew tears his throat with a few loud and rasping interjections. Then, it’s straight back to the acoustics for the closing number ‘True North’ where, once more, the band show they can really shine when tapping into something country-fuelled and understated.  Smoother than ‘Silver Rings’ but retaining a rootsy charm throughout, the six minutes fly by despite not being too complex.  Fans of the style will likely find themselves returning to this number time and again.

These seven tunes really capture the heartfelt nature of The Naked Sun’s performances. The fleeting moments where a vocal doesn’t quite reach the pitch as planned or a solo has a bum note only serve to make these recordings better – and so genuine.  Like Neil Young and Crazy Horse, they fully understand that all the studio perfection in the world can’t replace capturing that feeling of passion that all musicians should feel whenever they play.   For those who like Americana sounds without too much sheen, this release is essential listening.