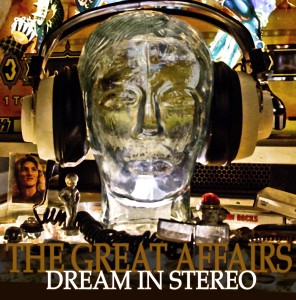 A couple of years on, ‘Dream In Stereo’ is a record that, in a few places, finds the Nashville quartet rocking harder than ever.  Never more is this the case than during a hard hitting opener ‘Left of Me’.  This tune comes with a huge blues-drenched swagger in the guitar department, while Kenny Wright’s throaty vocal settles for something distinctly late 80s as he channels Great White’s Jack Russell.  With an additional harmony via the band’s long-serving mentor Denny Smith, there’s more than enough melody too, while musically a world of slide guitar attitude and some great harmonica ensure a decent send-off.  Bringing similar old style rock ‘Secret’s A Secret’ brings a whole world of Stones-y guitars, a flash of organ and a southern charm.  Despite a guitar solo straight from the Black Crowes school of thought, it’s Wright who owns the track; his hard, raspy delivery is out there front and centre, with a love it/hate it gruffness that means business.  Both tracks show The Great Affairs rockin’ side in a very strong light.

A little rootsier – and veering towards more of a retro-pop feel – Smith takes the reins for ‘The Next Three Minutes’, his quieter vocal tones pitched well against a staccato guitar before blooming into a rousing chorus, full of harmonies.  Although a tune fairly typical of latter day Great Affairs’, it’s perhaps closer in tone to some of the material by related band The Die Youngs, particularly once it finds its stride and proves itself fairly infectious.  A similar thoughtfulness cuts through the moodier ‘I Can’t Sleep Alone’ placing Smith’s aching voice against huge minor-key chords and a spacious arrangement before stepping into a strong pop/rock chorus.  Under the slightly distorted chords, a melodic bass pins everything together on what occasionally feels like a twenty first century equivalent of Billy Falcon’s work.  Revisiting a favourite Great Affairs theme of the open road, ‘The Highway’ is a brilliant alt-country number.  A finger picked acoustic guitar is overlaid with dobro to great effect, while the protagonist tells the tale of a lost love who hates travelling – the hushed and downbeat mood providing the perfect foil for Smith’s natural voice, feeling somewhat like a throwback to the band’s excellent ‘Happy Ender’.   For those who may not always enjoy the hard rock bought to the band since Wright’s arrival, this tune will certainly provide some consolation.  Blending roots rock with a full and smooth sound, ‘We Just Disagree’ offers a wealth of multi-layered vocals, jangling guitars and distinctly 70s piano, resulting in one of the band’s best tunes.  Hearing this for the first time, it’s absolutely amazing how much more confident the band have become since 2010.

The Great Affairs certainly have sounds they know work well for them and naturally revisit them often – very much case in point for the twangy stomper ‘California’ with its rousing country rock edge – but just in case you feel ‘Dream In Stereo’ is overly familiar at times, ‘Miss America’ is set to blow you away.  Cut from similar rootsy sounds as the best GA tunes, this number remodels them into a slow-burning ballad that’s worthy of standing alongside The Black Crowes ‘She Talks To Angels’ and even the Faces ‘Glad and Sorry’.  A slow groove paves the way for a wall of gently stroked organ sounds recalling the late Ian McLagan, the soaring lead guitars are impeccably played and the sense of hurt within Smith’s delivery just sets everything off beautifully.  Across the better part of six minutes, the band are on fire – in the polar opposite of the likes of ‘Left of Me’ – pulling back at every turn, eking out emotion and knowing in their guts that less is – indeed – more.   Not only is this the album’s jewel (against stiff competition), but it’s up there with The Die Youngs’ ‘Nothing’s Broken’ as a career best for Smith and Wright.

On this fifth release, The Great Affairs make no attempt to pander to anyone that isn’t already on board.  The thirteen numbers recycle many familiar sounds with style and for those happy to go along for the ride, the dustbowl of the great wide open and even more tales of broken hearts are guaranteed to entertain.