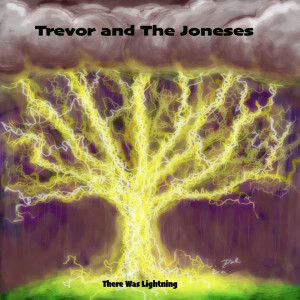 ‘Dig This!’ shows off the full-tilt end of the band via two minutes’ worth of high octane garage rock.  The drums underpin a careening riff and some top-notch fuzz bass, while Trevor wails and yelps through each line in a particularly unrestrained manner.  Those not partial to a bit of garage-based rawk aren’t likely to gain much from listening, but in terms of energy, the band are bang on, taking things up a notch with some unrefined guitar leads piercing the air between verses.  Slowing down, ‘Sneak’ is far more coherent – sort of like the bastard son of Lou Reed replayed through the hazy eyes and ears of the short-lived Paisley Underground movement in the late 80s. It’s very grown up, but at the same time never dispenses with the trashiness.  By the end of these two numbers, you’ll have a sense of whether this album is worth persevering with or not, but this is a record that never sounds formulaic, every track seems to present a musical shift from the one before.

Stylistically falling somewhere between those two opening tracks, ‘It’s Exhausting (Alright, Alright)’ brings one of the best vocal takes, with Jones barking each line like he’s fronting a sassy Detroit garage rock combo, the energy in his performance going toe to toe with the great, guitar driven musical backdrop. Between the main hook – the stupidly infectious call in parentheses – and a scorching lead guitar, this really cooks. Another instant highlight, ‘Grooving at The Speed of Light’ sounds like a mash up between a jangly Britpop tune and a demo from R.E.M.’s ‘Document’ years. A cleanly strummed acoustic and a ringing electric guitar ensure a strong tune – one of the album’s most accessible – while Jones, in turn, goes for something more melodic in the vocal depot.  While that vocal is still an acquired taste, everything comes together nicely. Also in an upbeat mood, ‘It’s Getting Early’ brings very accessible jangy alt-rock with a crisp blend of electric and acoustic guitars, an unexpected female harmony and the kind of wayward lead guitar fills that would make Black Francis proud.  On this track, especially, there’s a very pleasing tight but loose feel that very much acts as instigator for those cool guitar parts which, when counterbalanced by a repetitive hook, add up to make one of the band’s most satisfying numbers.  Very little of this bares any relation to the alt-rock enthused ‘Other Things’, which on first listen somehow ends up sounding like Thurston Moore fronting Pavement, even though it’s constructed from similar ideas to ‘It’s Exhausting’… By this point it’s clear enough that although Trevor’s vocal style and chosen guitar tone are a constant centre point for T&TJ’s music, the song writing and arrangements are prone to taking an odd turn, and clearly nothing is off limits.  On subsequent listens, it begins to sound more like Trevor and The Joneses, but as has already been suggested, what they actually sounds like can change on a whim.  It all makes more sense when you actually hear it.

If those shorter tunes occasionally hint at a loose jam band trying to fight their way to freedom, the album’s two lengthy tunes really capitalise on that promise.  With a distorted echoing guitar, ‘Show Yourself’ often sounds like a low budget recording of Band of Horses ambling through Neil Young’s ‘Cortez The Killer’.  The reverbed guitar tone – a huge feature within these ten and a half sprawling minutes – is classic, while the slow and measured backbeat occasionally gives the feeling of a drug-induced trip into the desert.  By the time the first solo kicks in at three and a half minutes, you’ve been firmly dragged into this sparse journey; a couple of minutes later still, there’s a feeling you might not make it back alive.  By the second instrumental break, three minutes later, the soaring and warbling guitars sound like they’re inviting an impromptu jam structured around ‘Like a Hurricane’.  Arguably the disc’s best number –and worth the price of admission – this really suggests that T&TJ are a great live act…and while the relatively lo-fi production of this studio record ought to enhance that, this is actually an example of a tune that probably deserved a far better send off.  Slow and woozy, the appropriately named ‘Superslow’ crawls across an unwavering nine minutes, building to a closing guitar and keyboard jam.  In theory, this is good, with an unfussy lead guitar once again more than hinting at a love for Crazy Horse, but it doesn’t quite live up to the promise: the guitar tones appear a little muddy, while the keyboards are almost lost in a genuine fug. This makes it somewhat more marginal a listen, almost hammering the listener into submission with a repetitive chord structure, but in lots of ways this piece – nearing drones in places – could have only been a closing statement – and it’s so, so different to the garage rock energies which began this musical journey barely fifty minutes earlier.

What have we learnt here? Certainly that this is a record best heard first hand; possibly that Trevor and The Joneses have a reasonable amount of talent, but haven’t fully worked out the best ways to harness it; or maybe that this is one of those records best summed up by the word “cult”.  However, in terms of song writing and musical performance, despite feeling a little scrappy in places, there’s a great deal to enjoy here, with the echoing production style often – though not always – giving an extra sense of life within the material.  Trevor’s vocal style, as flat and naturalistic as it is, might be a stumbling block for some, but the love for the sixties and the seventies within the tunes really comes across.  ‘There Was Lightning’ is not an instantly likeable album in many ways, but if you like Band of Horses, a little Son Volt and The Naked Sun, chances are, with a little time and patience invested, you’ll soon dig these hazy throwbacks.

Get the limited edition vinyl pressing from Plane Groovy here.