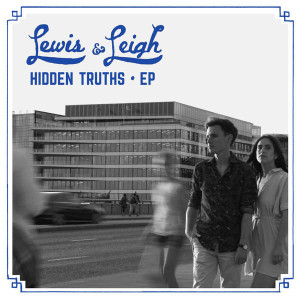 Let’s not mess around here: fans of Americana will be absolutely smitten after just one listen to this EP from alt-country duo Lewis & Leigh. Their third release in under a year, ‘Hidden Truths’ has a heart wrenchingly gorgeous sound, bringing a perfect blend of country and folk, with a smidgeon of a Wilco-ish influence in the guitar department.  Coming together from solo projects, hearing Alva Leigh and Al Lewis harmonise is to hear something natural and pure – voices that belong together as much as Lindsey Buckingham and Stevie Nicks, as Gram Parsons and Emmylou Harris, and these four songs have the natural flow of performers  who sound as if they’ve been playing together for years.  The fact that at the time of this release Al Lewis and Alva Leigh had only been writing and performing together for a short time only makes ‘Hidden Truths’ all the more remarkable.

The spooked out echoing guitar sounds of ‘Heart Don’t Want’ instantly give a sense of grumbling maturity, with Lewis – a Welsh Americana enthusiast – clearly keen to ensure the harmonious drive of the vocals never drift towards the saccharine.  Against this sparse backdrop, Leigh makes her first appearance in an understated fashion, almost mumbling and fragile, before Lewis adds a thoughtful harmony. The vocals quickly dominate, however, and moving into an upbeat chorus – complete with horns and a ridiculously infectious hook – the duo aim straight for the gut.  The result is a country inflected pop-rocker that sounds like The Civil Wars in a jovial mood.  With no weak points, it’s a natural way to begin the release, ensuring the listeners’ attentions are well and truly grabbed.

With a hard strum and a boom-chicka-boom rhythm borrowed from country’s formative years, ‘Only Fifteen’ is a fantastic example of the duo’s more upbeat and rockin’ style.  Leigh’s voice shifts between the country-tinged mood of previous work to having the vulnerability of a Jenny Lewis performance, while the songwriting – with a deep commitment to storytelling – has an almost timeless appeal.  More so than before, the musical arrangement is important to the overall memorability of the piece: the guitars lend a classic country flair, while the sassy horns bring a real power.  Much softer at first, ‘Please Darlin’ works a late 50s twang, over which Lewis places his most assured performance, before dropping back to allow Leigh space to add an equally harmonious vocal.  Finally coming together on a chorus, their blend of voices is sheer perfection, the kind of sound that could make stone melt.  Although it’s all appropriated from various radio friendly sounds of the past, this country-pop performance is brilliant – guaranteed to capture the imaginations of those who love She & Him, and an ideal snapshot of the Lewis & Leigh sound for the curious.

Their self-penned material is complimented by a well chosen cover tune to bring things to a close. Much like Johnny Cash had a gift for turning any material – whether a country standard, a Tom Petty cut or a Soundgarden rocker – into something tailor-made for his own image, so too do Lewis & Leigh, as evidenced by their takes on tunes by acts as disparate as Coldplay and Wilco on previous releases.  This time, it’s the legendary Elton John who gets the L&L treatment, as they take the twangy ‘Country Comfort’ (from the classic 1970 LP ‘Tumbleweed Connection’) and rework it with a softer edge.  You’re probably thinking this was a safe bet since – like the title suggests – this one already had a country lilt and has already been covered by many (including a really country rendition by Keith Urban), but the Lewis & Leigh performance tops all but Elt himself.  Lewis’s hard ringing guitar sound – clearly recorded live – brings a sense of immediacy absent from Urban’s syrupy version, while vocally (most obviously) they run rings around Rod Stewart (who, in turn had a bash at this not long after Elton).  Taking turns to deliver each line on the verse, the crying lilt from Leigh sounds heartfelt, while Lewis brings a more country croon, but joining together on the chorus, the blend of styles just brings each word to life.  …And the fact that this sounds so good some forty five years after Elton and Bernie Taupin wrote it is further testament to what a great song it is.

The very idea that Lewis & Leigh take a tune from a multi award winning, world famous performer and the result doesn’t actually diminish their own efforts but compliment them, just highlights how talented this pair are.  Worthy of release on the Loose Music label alongside Danny and The Champs, Andrew Combs and Israel Nash, ‘Hidden Truths’ is an essential purchase.  Grab it immediately.