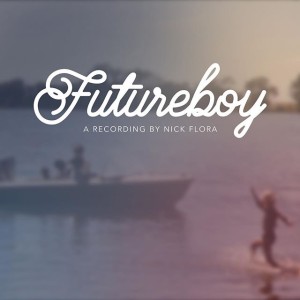 At the beginning of 2015, Nashville-based singer songwriter Nick Flora set out on a mission.  That mission was to raise enough funds to record three EPs’ worth of all-original material for release throughout the following year.  The first of those releases, ‘Futureboy’, places Flora squarely within the powerpop mould – it’s five songs bringing a few sunny vibes at a time when the actual summer begins to bid the northern hemisphere goodbye.

Starting with the slightly glammy ‘The Business of Breaking Hearts’, Flora demonstrates his great love of melody, as the drums dictate a stomping workout that often comes across as a hybrid of David Myhr and T.Rex.  In some ways, the vocalist’s slightly husky tones appear at odds with the shined up perfection of his chosen musical backdrop, but the tune is so well arranged, it’s hard not to find it utterly charming after a few spins.  The 70s vibe – carrying through to the slightly fuzzed up guitars – has a near timeless charm; some shameless “woo-woos” stoke up the fun, while tinkly glockenspiels top everything for that kitchen sink appeal.  Knowing that listeners who enjoyed this would hope for more of the same to follow, Flora instantly wrong-foots his audience with ‘It’s All Coming Together’, a number that trades all 70s glee for a twice-as-fuzzy 90s styled power. In this case, the carefully constructed distortion and guitar leads which eventually break through heavily recall later works by The Wannadies, only coupled with a chorus that’s straight from the Ben Kweller school of songwriting.  The dirtier sound is far more sympathetic to Flora’s vocal tones, too, so that’s very much a plus.

Switching gears again, ‘Take It From The Top’ has a pop heart coupled a disco tinged funk that altogether sounds as is parts of the tune could have been procured from a demo by Brandon Flowers and his band The Killers, while at once sounding very complete from the outset. A pumping bass and snare drum mark time, while Flora adds a bigger melody. His voice carries each line with an authoritive style, though not necessary the most melodious delivery.  The addition of some defiant oh’s gives this collection of sounds a much more solid grounding – and very infectious hook, before  various female harmonies during the second half really hammer home the quasi-disco tones. In terms of a performer having fun with his art, this is a big success as that sense of fun comes across very clearly…and, in Flora’s mix ‘n’ match tradition, that fun is about to very much leave via the side exit for the next tune.

The fingerpicked acoustics of the title cut tap into something far more adult as Flora reflects upon the idea of “travelling in [our] minds to the great unknown”.  Musing further that he’ll “never know what the future holds”, there’s an unease within the calming Nick Drake styled backdrop, a quieting disquiet, if you will.  Reintroducing the glockenspiel tinkles for percussive impact – since any kind of drums would have just killed the atmosphere stone dead – this is another charming listen…and If it hasn’t crossed your mind previously, the notion that Flora’s mumbling style owes a debt to Dave Matthews becomes very obvious at this point.  Last up, ‘For The Sake of Conversation’ mixes programmed drum sounds with hard guitar chords to create a very jerky new-wave homage.  The sharp guitar parts are dominant enough to carry the bulk of the piece, while piano flourishes and unexpected vocal harmonies add plenty of colour.  In terms of box ticking – melody versus hook verses general arrangement – nothing is left wanting here, resulting in a very solid slab of pop-rock. Again, hearing the end results, it’s occasionally hard not to hear ‘Sha Sha’ era Kweller in places, but that’s no bad thing.

‘Futureboy’ does not want to settle.  On the basis of how well Flora writes, though, no matter what the chosen style, it doesn’t especially need to settle.  These five songs – although different from each other, and sometimes wildly so – really show off how broad this performer’s influences and musical interests are.  Although far from perfect, it’s likely that anyone with a keen interest in either catchy powerpop ideas or  more thoughtful singer-songwriter material will find something to enjoy within this short collection.