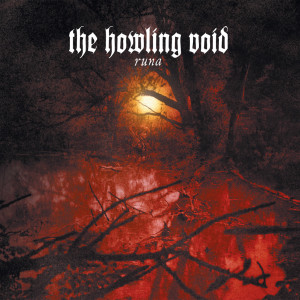 The ten minute opener ‘Irminsul’ is a no-nonsense riff based affair that lays the band’s dark soul bare.  From an opening, crashing chord, the riff takes over, becomes almost everything.  Slowly churning the same chord progression, The Howling Void have instantly won over those who love the heavy, but that’s just the beginning.  A counter melody of droning keyboards brings a funereal fullness and a gothic intent, sounding like a Howard Shore film score stripped of any lilting qualities and only ever presented through battle sequences.  As a repeated refrain, filtered voices croon the song’s title, but mixed as low as they are, this almost appears as an extra layer of instrumental sounds.  The guitars occasionally switch between the slow and oppressive to muted chug, but do not lose any of their force, while cleaner guitars eventually bring in a third melody, one that’s so buried, it’s crisper sound is almost lost.  Any feelings of a score depicting an army marching to their victory (or indeed, demise) are strengthened farther by a brief interlude dominated by the drums of war, but gor the bulk of these ten minutes, the repetition really takes hold. The dense sound is one that could appear wearing to those who seek a balance between riff and melody, but as the final notes fade, there’s no doubt that this has been a superb and almost cinematic experience.

‘Nine Nights’ combines a similar intensity with a more gothic intent.  A heavy bassline presents itself high in the mix at first, before deciding the distorted guitar lines are of bigger importance, and predictably enough, a huge doom riff provides the pivotal role, as a circular crunch lumbers slowly, but perhaps slightly more melodically than before, while clean guitars call from within with bell-like clarity.  A haunting vocal sits somewhere in the centre, not quite clean, but more with a greater accessibility than possessed by many a doom or black metal outfit, but the mix is so dense that any discernible lyrics are lost to the ether.  It’s in the number’s second half that most of the true potential is unleashed once a high pitched bass lays down a very melodic lead riff and solo over the heavy blanket of sounds, the playing soaring and falling in a very lyrical manner, its musical voice proving far more important here than the sounds of any human vocal chords.  In terms of cinematic doom metal, these seven minutes are The Howling Void’s greatest achievement – fans of the style should hear this EP based on this track alone.  Combining the battle drums from ‘Irminsul’ with the heavy gothic sounds of ‘Nine Nights’, things come full circle with ‘The Wolf and The Eclipse’.  Dirgy guitars crank out a slightly uneasy riff, over which a cleaner guitar adds a brief motif, before everything comes crashing in at full pelt.  The snares hammer down on the bar lending an even more intense sound – there’s no room here for grooves or flashiness.  With the addition of droning keyboards and a drum line that’s heavy on the toms, it’s fine gothic metal indeed, worthy of the mighty My Dying Bride.  With a dense sound already having taken hold, things go a step farther with a lead riff that almost channels a folk jig.  The fact that such a jaunty melody finds a natural place within such a claustrophobic sound is testament to R.’s gift for arranging.  Everything subsides for a few bars of atmospheric keys before the big guns are unleashed. Closing this brooding affair, The Howling Void first opt for the slowest and doomiest riff of all – each chord spanning what feels like an eternity, crushing and remorseless before bringing in extra drums to hammer home their maximum heaviness.  Naturally, keys lend an extreme gothic atmosphere, and as the guitars switch to accommodate a shrill edge and a descending scale, everything fades into the distance leaving the listener hanging in silence.

With three tunes totalling over twenty five minutes, ‘Runa’ is almost album length by some standards.  Each of the featured pieces show The Howling Void’s gift for structure, heaviness and melody within heaviness with fantastic results.  There’s not a lot of chance for these recordings to reach a more mainstream metal audience, but those looking for something thoughtful and on an epic scale will certainly find a great deal to love.