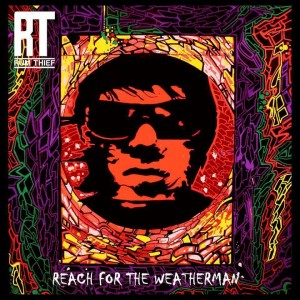 Although carrying a band name, much like Badly Drawn Boy, Rum Thief represents just one man. It’s the chosen moniker for singer-songwriter Jot Green, a Manchester-based multi-instrumentalist.  He served as drummer in many local bands for over a decade, but eventually decided to strike out on his own.  The first Rum Thief EP, ‘Clouded Mind’ attracted the attention of a few ears and Green set about forming a band for live shows.  A couple of years on, the return of Rum Thief finds the performer sounding much more assured.

Kicking off with the title track – and most raucous affair – there’s a great stomping beat and walking bassline hinting at rockabilly, before exploding into a semi-distorted slab of indie-rock a la Arctic Monkeys.  Green’s accent is laid on thickly, but never comes across as forced, his attitude laid bare for all to hear – especially when it takes him barely one line before he’s bellowed “fook” in a stroppy manner.  The guitars often dominate, but lurking beneath, that rockin’ bassline hangs on shifting the track forward in a retro manner, kind of in the way Imelda May might…if only she learnt to toughen up and had any decent songs.  The chorus is key here – hearing it once you might think it merely okay, but it’s one of those that gets under the skin after a few plays.  Again, there’s a lot here to appeal to the Arctic Monkeys devotee should they fancy checking out something unfamiliar.  ‘Stitch In Time’ doesn’t move too far from that blueprint – more retro sounding guitars and chunky basslines sit out front and centre – but there’s a touch more melody creeping through.  That melodic bent is more obvious by the time the chorus rises, and this one’s a rousing affair inviting a singalong which sounds like it could become a live favourite.

‘Dirty Shoes’ sees Green wielding the acoustic guitar laying down a hard strummed rhythm, over which an even harder twangy electric lead thrashes a tough rhythm.  As before, Green shows he more than knows his way around a chorus and this folk-rock/indie thrasher comes across like Frank Turner in a forthright mood (though obviously far less wordy) while capturing the spirit of the street and drunken gatherings in a way that the middle-class, and rather poncey Skinny Lister could never manage in a billion years. More acoustics form the backbone of the more reflective ‘My Friend’, its simple rhythm quickly catching hold of a four chord melody and running with it.  An even simpler keyboard line and a rattling rhythm flashing out the overall sound, things slowly take shape, but never lose sight of the basic DIY feel at the heart of the piece.  In this scenario, Rum Thief are presented with their retro heart firmly on the sleeve – the song broadly appealing for those who enjoy indie-folk, it’s a good showcase for Green’s naturalistic vocal style.  He still champions the accented delivery, but a thoughtful chorus melody finds him stretching out, moving away slightly from the stylised singing, allowing a small wobble to add extra charm.  As with the rest of these tunes, it only takes a few spins to really grab you.

This EP does a reasonable job of showing each of Rum Thief’s musical facets in a condensed format and with the minimum of fuss.  It’s unlikely to convince anyone who doesn’t like the style or isn’t interested in Manchester’s answer to Frank Turner…but if you like what you hear at first, it’s not going to be too long before ‘Reach For The Weatherman’ finds itself in heavy rotation on your music player of choice.  Recommended.