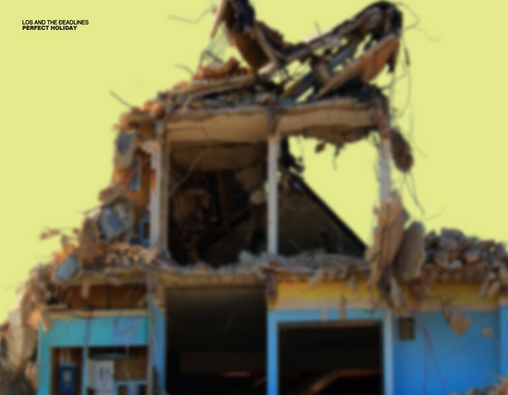 At the outset of their third EP ‘Perfect Holiday’, US art-rockers Los and The Deadlines ask one simple but important question.  From within the echoing walls of their studio space, a voice asks if [we’re] “ready to rock?!”, to which a louder voice retorts “YEAH, fuckin’ rock!”  This might seem like a horribly clichéd way to begin, but from that second on, this band are everything but clichéd, their huge array of riffs and noises setting out to twist their sound at almost every turn.

‘Feel At Ease’ is designed to make the unsuspecting listener feel anything but, as the band clatter on their chosen instruments in a chaotic freeform manner, somewhere between avant garde noise and art-punks ALL at their most obtuse.  Giving up on this idea after a bar, the beginnings of the band’s general appeal presents itself, with the arrival of a fat repetitive bassline.  Never wavering, this provides a basis for the vocal to weave an almost spoken delivery; by the time the guitars appear, things level out into an unexpected indie-rock funkiness, like Franz Ferdinand wearing a pair of size eleven boots with steel toe caps.  There’s a fairly hooky chorus thrown into the mix too – perhaps the most unexpected ingredient in this sticky quasi-mess, proving once and for all, for all of their wilful intents, someone here knows a hook can be all important.  There’s so much going on, though, that it’ll take some time before anything sticks in your head, but even so…that chorus may just win over a few listeners who may have otherwise dismissed this as a shape-shifting mess.  So what of the avant garde noise that welcomed us? Was that a red herring?  Not especially, but despite recurring at the midpoint and sounding more like ALL than ever, it doesn’t play a huge part in these four minutes.  An odd bedfellow with the reasonable chorus, it strongly suggests that not everyone in the band is playing from the same sheet.  This might just be a good thing.

With ‘It Could Be So Much Better’ beginning once again with a hearty shout of “ROCK!”, you could accuse L&TD of labouring a point or even taking the piss (possibly even both), but as quickly as anything, they move into an absolutely killer riff, meaty enough for almost anyone to forgive such silliness.  With a more no-nonsense approach, the guitar asserts its rightful position as the dominant force, cranking out a dirty riff that sounds for all the world like an Audioslave homage and with great tone and relative simplicity throughout, this strong melody comes out with a winning intent from the off.  The rest of the band never slouch, of course; with the quasi-bluesy tones, the vocal drops in to suit, with frontman Alex LoSardo bringing a tuneful performance throughout, while the rhythm section hits hard.  In keeping with what’s gone before, there are a few off-kilter moments – the guitars eventually descend into some mildly atonal anger, with the drums bashing intermittently.  Eventually, everyone comes together in fine fashion – the high speed, crashy rock showing signs of a hard rock force.

Most interesting of all, ‘The Youth’s Opinion’ mixes a solid riff with a quirky vocal, as LoSardo taps into a spoken delivery that brings the nerdiness of Devo and Mike Patton’s salesman voice (as per the Faith No More classic ‘Land of Sunshine’) in equal parts.  Heavy drums and discordant guitars provide the real meat throughout – again with a few jazz-inflected stops and fills borrowed from the early Mr. Bungle – and the heaviness carries everything with a genuine weightiness.  The mix of riffery and pointed vocals also recalls Dave Grohl’s largely forgotten Harlingtox AD project, but these influences rarely sound like direct lifts. In art rock terms – particularly approached from the more metal-based end of the spectrum – this is the sound of a band just wavering on the right side of odd, while retaining the need for a little broader appeal.   Dropping back into some slow funk, ‘Bat Shit Crazy’ offers a swagger, before squalls of guitar noise constantly threaten to derail everyone and everything. Despite the title, it’s not the band’s most out there offering – more of a heavy stomp than “crazy” of any kind, but even so, this number comes with a great sound, the mix of heavy bass and synth flourishes providing the bulk of the entertainment.  Bringing the chunkiness of ‘…Better’ and the artiness of ‘Youth’ together, ‘We Lust To Shop For Nothing’ really is the whole package. It may not have the strongest hook, but in terms of what each member brings to the sound, this is the best example of this act’s intensity. Choppy guitars sound like an early Police number played at half speed and double volume, before a wonky riff takes over, crashing through everything in its path.  The verses bring an unsure vocal before a more disjointed approach tackles what passes as a chorus. Rhythmic and heavily syncopated, this shows off L&TD’s penchant for clattering rhythms in a very direct fashion.  Assuming you’re still listening, this is almost guaranteed to entertain.  Bringing things to a close with a crushing doom riff, they ensure for all the times you may have just been wrong-footed by their constantly changing tack, when this EP ends, you’re sure to remember the heavy, neo-monolithic riffing, if nothing else.  There’s much to enjoy here, so that probably won’t be the case, but in terms of big riffs, this is pretty immense.

Not always the smoothest of listens, ‘Perfect Holiday’ is heavy, funky, ugly, challenging, groove-laden, quirky, odd…and yet not entirely excluding to those who’d like a couple of melodies, intense or otherwise.  For those who enjoy the most obtuse elements of Faith No More and Dog Fashion Disco, stoner rock, and arty noise (preferably a combination of each), Los and The Deadlines are certainly worth adding to your ever-growing listening pile.