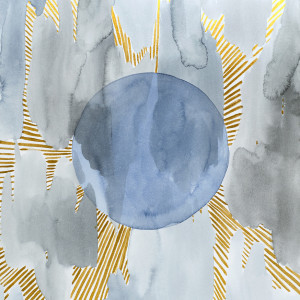 In 2011, Dakota based singer songwriter Nathan Edwards released his debut album ‘New Season’, a heartfelt collection of acoustic folk-pop tunes with a big heart.  Issuing a selection of Stephen Foster penned material as a stop gap, Edwards then set about working on his second collection of new, original material.  Having then taken some four years to create ‘Far Away From Here’, Edwards certainly couldn’t be accused of rushing…and the care taken in ensuring this second proper release is of a high standard is evident right from the get go.

Typifying the very core of this singer-songwriter sound, on ‘Burn and Fade’, Edwards channels James Taylor in the way his soft syrupy voice meets his thoughtful playing via a natural style and classic finger-picked melody, and by the time harmony vocals are introduced for the chorus, this number really, really shines.  There’s more here than just a man, an acoustic axe and a stool, as warmer sounds come courtesy of a little organ and bell-like percussion, but it’s the voice and overriding melody that really sets the mood.  In all honesty, if this doesn’t win over the acoustic, AM radio heart, then nothing will.  Gentler still, ‘High and Dry’ is even more stripped back, the hard acoustic strings almost bringing a dobro-like sound, with the reintroduction of intermittent keys bringing extra layers.  Intoning how he thought “last night’s dream was real” and how “the little things in life” help him to stay focused, you can almost visualise the performer sitting in his own personal space – perhaps a wooden loft somewhere.  This completely from-the-heart tale of taking stock of what you have and sharing those moments with someone you love presents a wonderful and unfussy example of Edwards’s still largely undiscovered talent.    Somewhere between these styles, the title track is an equally heartfelt, hard strummed affair with the acoustic strings bolstered by piano, a rousing chorus and an overriding feeling that somewhere along the line, this musician has fallen in love with Tom Petty’s ‘Wildflowers’.  …And if you, too, hold that album in high regard, there’s a fairly good chance you’ll have an instant affinity with this tune, as well as a good few others on this release.

Edwards maintains a naturally soft vocal tone throughout ‘Steady’, sounding like a mellow voice of calm while his acoustic guitar still rings through, but on this shift farther towards country sounds, his bandmates bring a great sense of camaraderie with their performance.  The drums rattle with ease, occasional fiddle cries without ever feeling the need to force its way to the fore or tempt everyone into a relentless jig, before Nathan’s wife Cassie fills space with some understated harmonies.  If the stripped back acoustics of ‘Burn and Fade’ provided a perfect continuation from ‘New Season’, this reflects more of why this singer-songwriter felt it necessary to also celebrate the forefather of American folk a couple of years down the line. With his voice occasionally dropping into a lower register, his gift for fitting country environs seems as natural as that for stripped back folk.  If those numbers show optimism, a cloud descends for the epic ‘Bury Down’, a piece informed by measured drumming, reverbed guitars and a harmonious approach to rootsy sounds.  More rock than folk, this darker offering shows a strong influence from some Wilco material, while sounding like a belated bedfellow of the Indigo Girls’ classic ‘Kid Fears’.  In fact, the drones and ominous tones would have been perfectly suited to Michael Stipe’s inaudible mumbles.  As it is, with pride of place right in the centre of this album, it almost feels like closure for a first act in this musical travelogue.

Scattered throughout these tracks are a pair with a slightly more rock-based sound.  The first of these, ‘Palisades’ is a fantastic track indeed, capturing Edwards and his cohorts in a mood that is wholly reminiscent of Five Easy Pieces (one of the finest one album bands, ever), while also showing influence from the excellent Gathering Field.   With a stronger role for the drums – a simple rhythm powering through the verse – and a solid bass, Edwards then builds from the ground up.  His performance still comes with plenty of emotion, although with the arrangement being less stark, it feels much less like a personal intrusion.  Cassie is called upon once more for a suitable harmony, and by the time the band reach their final chorus, complete with swelling organ, you can tell a good time was had by all. As the final organ notes fade out of earshot, there’s a feeling we’ve been invited to share something special.   ‘Frontlines’ retains the beefier rhythm section, although does not present them in the same rousing manner. In fact, it may be in the lilting waltz, or the fact that Edwards finds a tone that sounds like a 1960’s Barry Gibb, there’s something here – at least to begin with – that has an occasional air of sadness.  Even so, there’s a great arrangement to be heard with more fine harmonies, while a big climax ensures that any of those downbeat feelings presented at first are soon forgotten. At the close of our journey – for it is such, since the songs have recurring themes of travel – things come back to a more country-tinged mood with the self-reflection of ‘Demons and Doubt’.  With a simple acoustic guitar melody over laid by Chris Isaak-esque echoing electric lines and a touch of melody hinting at steel guitar, this old fashioned waltz places Edwards somewhere between Eric Lowen and Nanci Griffith.  It doesn’t break any new ground in Americana terms, but the crisp sound of guitar strings and a soft voice are particularly friendly.  While the slightly spiritual lyric might seem a little trite, the arrangement itself is near faultess.

With a sound that straddles folk, acoustic pop and a touch of country, these songs come together in a timeless fashion, with Nathan’s approachable voice often at the centre.  A fine companion to his previous all-original release ‘New Season’, there are no weak links within these eleven songs. With material out there for direct comparison, follow-ups are instantly open to criticism, but fans of acoustic music – and particularly that of the sadly missed Lowen & Navarro – should find this disc absolutely essential listening.