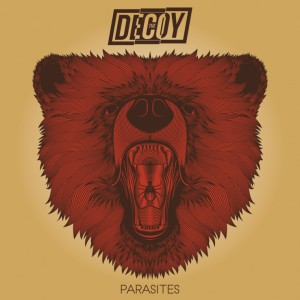 ‘Moustache Cash Dash’ shows off the band’s quirky art-rock style from the off.  True to the band’s moniker, this number provides the ultimate distraction, twisting and turning incessantly and packing in almost four minutes worth of enjoyment in under two minutes.  The guitars lay down a crashy riff for the most part, joined by a hefty drum part, but between the sounds of the noisier elements of Mallory Knox and Biffy Clyro, there are far more interesting elements at play.  The band kick this particular number off with a tight harmony vocal that eventually resurfaces as a quasi-chorus, while elsewhere there are shifts into math rock complexity, a brief reggae-influenced and very rhythmic interlude and all before an even briefer nod to post-hardcore noise tops things off. In short, it’s kind of a mess…but it’s a glorious mess and if that doesn’t peak your interest, nothing will.  Moving into the title cut, things shift towards the slow and grindy. It’s principally a showcase for bassist Joel Williams and his fat tone at first, but once more, The Decoy show signs of a hugely restless spirit. Throwing in sledgehammer guitar riffs aplenty, there’s weight to their sound, while frontman Lewis Barber’s vocal performance includes spoken elements and brief dalliances with melodic singing before challenging his more guttural instincts to the max.  Shouting at the top of his lungs, the effect is much like hearing Frank Turner’s performances with Mongol Horde taken to extremes.  The guitar work remains complex enough to maintain interest elsewhere, but in terms of the over-riding mood, expect a fine slab of post-hardcore noise here.

Tapping into the funkier end of their talents, ‘Vultures’ kicks off with a heavy drum part, complimented by a heavy bass twang, before the guitars step in and move everything towards a heavy alternative rock groove.  While the riff is among the EP’s more basic, the heavy moments are intercut by art-rock and funk-metal interludes – often seeming shoehorned in, but sounding great nonetheless – while the lead vocal shows a very British slant, with a very natural presence throughout.  The repeated refrain of “she’s my girl” is a rare example of a hook remaining vivid once the music has ended, so this is likely to be the track with the most commercial appeal.  If nothing else, ‘Vultures’ demonstrates a band who can be heavy and artistic while retaining a playful edge.    Teasing with more lightness, ‘Andyouism’ begins with jangling indie guitars, very much in the mould of Sunderland’s own Frankie & The Heartstrings.  In the usual tradition, of course, The Decoy choose not to follow this musical path for long, soon switching to heavy mid-paced rock, showcasing a sound that’s almost a hybrid of early Biffy Clyro and Royal Blood – the latter referenced in the pounding groove.  Tailing off with a bit of reggae lifted from The Police (circa ‘Reggatta De Blanc’), the tune fades out, leaving the listener wondering what might have been around the corner.  Always leave ’em wanting more, as they say…whoever they may be.

In terms of squeezing a huge variety of influences and sounds into such a short duration, The Decoy go in fighting and come out winning.  This can make the EP quite hard going, especially with the relative lack of hooks, but to knock them for being challenging would miss the point of their rather noisy sound collages completely.  Like Wot Gorilla? and (to a lesser extent) Super Luxury, this is a band revelling in experimentation, while simultaneously driving some great riffs through our collective skulls.  Within these four numbers are the sounds of a vigorous musical unit, tight at the outset and with a frightening amount of promise.  Sure, as previously stated, they won’t appeal to everyone, but for those who get it, ‘Parasites’ offers a musical ride that’s likely to be both intense and thrilling.