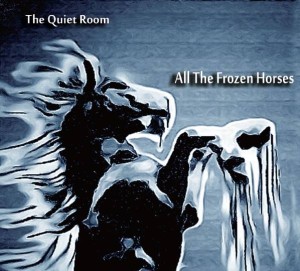 The resultant material was mechanical, synthetic even, and eventually found a home in 2015 on ‘All The Frozen Horses’, a debut release credited to The Quiet Room.  Not so much song based, but concerned with atmospheres, it’s eleven chapters – built from improvisations – appear detached from the warmth of human spirit; the soundscapes like a dark soundtrack to a lost weekend from the 1980s played in the head of a man in solitary confinement. If you’re already with Evoletah in any of their incarnations, there’s no real guarantee you’ll like this.   There are only ever fleeting similarities, after all.  It’s really difficult to pick out standout tracks and even standalone tunes, the thirty two minute duration kind of ambles with no real purpose and yet it’s so hard not to keep listening.

A slow drone marks the start of this musical journey, barely shifting from its original key.  A programmed drum is thin yet hard, and its only with the arrival of a vocal things begin to take shape.  Cahill’s voice is instantly recognisable, despite a few filters; his first utterances unsure, but soon rising into a high tenor which suits the music but not necessarily the performer.  Extra keyboards bring a circular musical motif, and the vocals drop back down to the more familiar.  There’s something nostalgic within this coldness, but it’s never fully realised; it may be parts of Talk Talk, maybe John Foxx…but this tune disappears without ever reaching it’s true potential, giving way to ‘The Arena’, a piece heavily reliant on stabbing keyboards for a bass riff.  The Quiet Room begin to get louder, though the juxtaposition between more high tenor vocals and droned synths is a touch unsettling.  A spoken monologue gives a sense of the heavily stylised material, arty but not pretentious.  ‘Noir De’sir’ combines a quasi-trip hop loop with multi-tracked voices – again the high pitch, but a strong focus on heavily treated mumbled, almost spoken material – to reasonable effect.  The closing bars bring muted brass and jazz leanings, very much like an interlude from Miles Davis’s ‘Tutu’ or Branford Marsalis’s work with Sting.  It brings a couple of minutes worth of superb soundtrack worthy material, but at this point, The Quiet Room are in danger of losing pretty much everyone who came looking for actual songs or hooks.

If your patience is wearing thin, don’t give up, since there then comes a most epic segment, ‘My Side of the Story’, a dark jazzy, dubby groove working around a mumbling, almost spoken vocal.  Cahill’s voice acts as a pivotal element in this musical sound collage; the cymbal-less drumming adding depth throughout, keyboard drones and muted brass bringing sounds not unlike the more minimalist parts of Steve Hogarth’s ‘Ice Cream Genius’ and that album’s keyboard soundscapes laid down by Richard Barbieri.  In terms of tune, the whole album hangs upon this, but again, everything is more concerned with moods over hooks…of which there aren’t any.   ‘A Simpler Plan’s droning keys and rattling tambourine bring a great exercise in minimalism, forcing Cahill to carry a tune with a breathy vocal.  The understated moodiness sounds like a throwback to the more ambient elements of the Japan catalogue – a great sound and influence – before ‘Q & A’ sweeps through with an almost funky arrangement with high bass tones borrowing from Simple Minds’ Derek Forbes, while the mix of pop sheen and detached emotion, again, is likely to invite more comparisons with Japan.  A repeated line “I’m sitting in the back room with my yesterdays” is the closest to a chorus you’ll find, but Cahill’s internal torment ensures it sounds more like a personal mantra from a man best left with his thoughts.

The second half of the album is far less focused, with its five pieces relatively short and sparsely arranged.  ‘For Our Own Good’ is incredibly dark – again, almost David Sylvian-like – with simplistic keyboard washes punctuated by human handclaps.  Cahill mumbles through each line, more of a storyteller than singer, before everything stops short.  The title cut, a spoken interlude taken from ‘Kaputt’ by Curzio Malaparte, really gives the impression that what began as improvisation now forms a narrative, but beyond the feeling of loneliness and cold back rooms, like a character resisting therapy, it never really lets the listener in.  ‘Mayan Dream’ drops back into minimalist electronica, bringing ambient sounds until a trumpet signifies we’re now ‘On The Corner of Loss & Gone’, our protagonist begging for a coffee, becoming ever more removed from comfort, before the album’s coda asks plainly and painfully “Where were you…nowhere to be found…when I needed you?”

Too distracting for a truly ambient experience, and yet too bleak for those who like synth based pop – especially that from the 80s palate which this duo borrow somewhat liberally – ‘All The Frozen Horses’ is a disquieting experience.  It beckons you into a dark place but eventually takes you somewhere so desolate that once you’ve reached the end, you’ll wonder what’s beyond The Quiet Room.    Are you ready to go there?