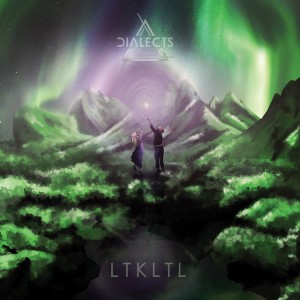 Taking the jazzy mathrock complexities of Wot Gorilla? and fusing their complexities with a barrage of post-rock noise worthy of MaybeSheWill, on their debut EP, Glasgow’s Dialects instantly prove themselves to be fantastic players, ready to make an impact on the alternative scene with a real love of (largely) instrumental mathrock and post-rock sounds.

Beginning with a brief feedback drone and a atonal rhythm guitar, lead track ‘Restless Earth’ quickly asserts the bands intentions via a huge, crushing riff.  Listen beneath that, though, and you’ll latch onto an impressive proggy lead guitar churning out a clean toned circular riff; the repetitive nature gives this brief section a great melody.  As the huge riff subsides, the jazzier elements take over; clean guitars bustle in the manner of art-rockers Wot Gorilla?, over a live sounding bass for several bars before the quartet launch back into a wall of noise, this time overlaid with a soaring lead guitar.  At the point where it seems that’s it for the duration, things switch back to more melodic turns – a dancing bass line, an off-kilter rhythm and tight drums all playing a key role in this sound collage.  ‘Unknown Orbit’ follows swiftly – again making a quick play for the circular guitar styles, this time slightly distorted.  Under this, drummer Jonathan rattles out a tight and quirky rhythm, before a crashing lead guitar blows everything away.  The shift between loud and quiet is the main thrust of this second piece – the quieter sections at first seeming more impressive, thanks to those drums, but subsequent hearings really show the twin guitar attack of Steve and Conor to be a real musical force.  Somewhere within, given the difficult task of anchoring this all together, bassist Ali adopts a fat sound, his assertive playing sounding excellent against progressive drum lines and various feedback tones.

Taking the midpoint to step back and offer something a touch more melodic, ‘Good Luck Felix’ opens with echoed guitar lines and distortion, before launching into something that sounds like a fusion outfit tackling an early tune by The Smashing Pumpkins.  The bass has a distinctly 90s vibe and brings a necessarily warm tone against a pair of clanging guitars.  Despite offering a couple of rhythmic quirks and a few stops, this is much closer to straight alt-rock than anything else on this EP.  Never the worse for that, mind.  The increased focus on instantly accessible melodies provides an easier entry point to the world of Dialects…while an occasional vocal refrain shows off a slightly friendlier edge.  Cranking the intensity once again, ‘Let The Kids’ begins with an absolute monster of a riff; a meaty sound quickly asserts itself with an approach that sounds like A Perfect Circle cranking out post-rock sounds – a brilliant guitar tone and bendy bassline quickly present themselves, before everything drops back for some tuneful interplay between drums and ringing guitar.  In Dialects’ usual tradition, that’s not all: they switch to a third style before long…and in this case, a mix of heavy post rock and accessible alternative sounds provide plenty of entertainment.  As the quieter, more melodic parts creep back in for a close, it’s time once again to enjoy Ali’s melodic and complex bass structures, an increasing important factor in the band’s sound.   Finishing with the excellent ‘Spectacular Supernovae’, Dialects explore their jazzier tones once more as the drum lines assert themselves in a quirky and complex manner.  Again, the main riffs are heavy and distorted, but they are counterbalanced throughout by a clean lead, taking up the mantle of the main melody, much in the way a vocal refrain might.  As before, the music is so enthralling, it doesn’t need the vocal as an aural focal point.  Moments to enjoy here are again plentiful: the contrast between the lead guitar and riff proves constantly entertaining; unexpected twin leads bring a surprising old-school edge (albeit briefly), while fast-paced looped staccato rhythm guitar calls upon The Edge for unexpected inspiration – in particular the intro the U2 classic ‘Wire’.

Complex, direct, loud, quiet, thoughtful, brash, quirky, obtuse: somehow Dialects’ multi-faceted sound covers all of these key points and more. Somewhere behind the sheets of metallic noise are well-structured and enthralling arrangements that are completely demanding upon the listener.  Like the post-rock equivalent of a great prog band, there are times when it’s not always entirely possible to focus your energies upon the whole picture – better to pick out your preferred instrument and hone in on that for a while…then switch to something else and start the whole process again.  That way, the five soundscapes on ‘LTKLTL’ are destined to have a lengthy shelf-life.  Fantastic stuff.