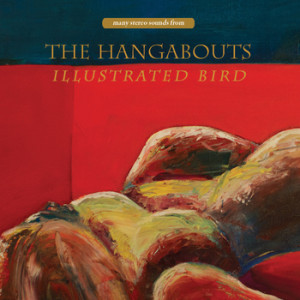 The Hangabouts are a retro-pop trio from Michigan, whose music conveys much love from the mid-late 60s, although often recycled on a smaller budget.  Given they’ve got a similar musical mindset to so many great musicians – particularly the acoustic side of Fountains of Wayne and the woozy output of DIY outfit The Paul & John – their 2014 release ‘Illustrated Bird’ should be great.  However, due to a limited budget that doesn’t always suit their chosen style, it sometimes falls short of the mark.  That’s not to say, however, it doesn’t have some great bits.

The first two numbers and the title track represent the album’s finest offerings, and on the strength of these alone ‘Illustrated Bird’ is worth your precious listening time.  ‘Roman Forum’ recounts the story of two friends over a semi-acoustic pop backdrop.  The blending of acoustic and electric guitars adds a really pleasant AM radio pop feel, its instantly likable melody given the perfect send off by much like one of the aforementioned Fountains of Wayne’s gentler moments.  Any FOW comparisons have much to do with the vocal style as much as the general feel.  Whatever, it has the quality of a lazy and hazy summer day – an event seen through rose-tinted eyes – and shows off this band in a strong light.  Also enjoyable, the high-energy bounce of ‘November’ invites head wobbling and a smile.  A walking bassline, noodling guitar break and occasional piano makes this tune sound like FOW channelling an ELO demo and as such is great fun.  Fingerpicked guitars and a rhythmic foot-tap nod towards The Beatles’ ‘Blackbird’ on the title cut at first, before the simplicity is coloured by extra vocals and a melotron.  Again, The Hangabouts’ love of the mid-late 60s is too strong to ignore – and as recycled as the ideas within this tune may be, the end results are very well executed, perhaps the best example of their brand of retro pop on this particular LP.

‘She Hates You’, meanwhile, is a rather earnest song conjuring up feelings of cloudier moods, even though the arrangement is still one that comes straight from the Brian E. King school of recycling.  Byrds-esque guitar chimes and strong melodies are on hand to carry the bulk of the number, while a tough bassline presented high in the mix ensures this is one of ‘Illustrated Bird’s best sounding tunes overall, even though a slightly flat drum is evident.  Not quite up there with the best, a heavy twang kicks off the woozy ‘Cut Down’, before a strum, a nasal vocal and mellotron bloom into more thoughtful, easy listening pop from days gone by.  The peaceful mood gets threatened by a neo-psychedelic, treated guitar break en route, but hugely strong melodies ultimately win out. It provides another reasonable insight into this trio’s preferred style of songcraft as well as their influences, while a little more niche, ‘Love Nothing’ has the rumpty-tumpty air of Donovan’s ‘Mellow Yellow’ and many a McCartney composition, with mixed results.  Again, some great harmonies are on show as well as boasting a great drum sound; it should be up there with ‘November’ in terms of feel good pop fun, but the choice of a particularly discordant keyboard solo makes the track lose its way a little.  The choice of keyboard tone overall, meanwhile, is iffy, definitely showing up the small budget with which this album was made.

Much less enjoyable – again, (no) thanks to a demo quality keyboard – ‘Forest For The Trees’ has its best intentions flattened by a casiotone oddness. On the surface, it’s a good-natured, sixties inspired number, a intro hinting at the classic ‘Itchicoo Park’;.  Beyond that, the bouncy tune is reasonable and the hook, too, is catchy.  Even the waltz shoe-horned in between verses as a cheeky nod to ‘We Can Work It Out’ doesn’t grate…but there’s one element here that does its utmost to wreck the entire tune.  In the left speaker channel there’s another odd keyboard noise, this time sounding like a melodica – arguably the least tuneful of instruments. The keyboard here sounds really cheap and nasty…and that combined with an overuse of the much clichéd “begging on my knees” phrasing means that, in the end. its just one of those tracks that you just wish The Hangabouts had spent longer on perfecting.

At the bottom of the pile of this retro assortment, the twee and quasi-trippy ‘I Wonder Why’ toys with multi-tracked Beach Boys harmonies, only to then smother them with an out of tune woodwind instrument and repetitive ukulele clanging.  If this was meant to annoy, then its a gold-star effort and the chaps have done a bang up job; if, however, the band were thinking this number is either fun or quirky, they’ve missed the mark in a spectacular fashion.  ‘I Wonder Why’ represents the very reason why mp3 players have easy skip functions…

‘Illustrated Bird’ is an album that has some great songs, but they’re not always afforded the most appropriate send off.  Thankfully, in the digital age, its easy enough to hear albums and then make up your own mind before spending cash on that all important purchase, so that said,  fans of this particular style should still bring something positive away from The Hangabouts’ DIY pop, despite it having a few obvious imperfections.