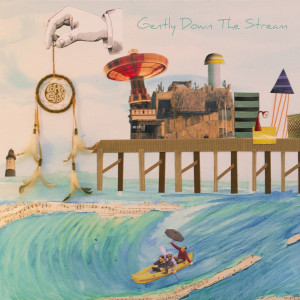 On their debut EP, the self-released ‘Gently Down The Stream’, Philadelphia’s The Soft Spots blend various indie/alt-pop oriented sounds creating what sounds and feels like a very accomplished release in terms of production, especially for a band so inexperienced at the time of its release.  They waste no time in making sure this surprisingly professional sound greets the ears of the prospective listener.

‘Mourning Tide’ begins slowly, with dark synth-heavy drones reminiscent of some of Tangerine Dream’s eighties output.  Slowly, the synth chords assert their increasing importance, while a drum machine drops in beats to give everything a sense of structure.  This is just the beginning:  The Soft Spots aren’t actually about to send you reeling on a long and ambient journey – their music, although heavy on those keys, is more of an ambling, dark dreampop persuasion.  This becomes absolutely clear with the addition of a vocal – heavily filtered, equally drifting in some ways, but always essential to completing this musical picture.  These things combined come across like a mix of early Cocteau Twins and bits of Slowdive, but even despite the unashamed borrowing of nineties sounds, this trio’s approach to dreampop sounds fresh enough; the moodiness of this tune seems particularly cinematic for their chosen subgenre.

It would be fair to assume upon first listen that ‘Gently Down The Stream’ brings more of the same, but there’s more at stake.  Although the other four tracks are still heavily influenced by similar traits – and those not keen on moody, wavering alt-pop certainly will need to give this a miss – there’s seldom anything quite as dark.  In an instant, ‘Wake’ seems a touch more throwaway.  From the outset, it has a more upbeat and poppy sound, and its one that serves the vocal well, but in quickening the pace, the band certainly lose some of their dark and atmospheric cool.  There are other elements to enjoy here, though – such as a ringing guitar in the left channel with an eighties persuasion in the left channel, as well as a deep indie bass, both of which make it possible to overlook the occasional ukulele in the right.  The brief addition of calypso steel drum might just appear overkill, but there something optimistic and sun-filled with the alt-pop outcome that they just about get away with it. Its entirely possible, too, to forgive the lack of real percussion: in fact, The Soft Spots’ charm actually suits being underscored by a shameless use drum machine…

Taking those basic elements, they crank up the pop on ‘Getaway’, a hard blending of dream pop from the early 90s and 80s synth pop.  Handclaps and big beats stoke up the eighties mood, but as before, The Sun Spots avoid this becoming too saccharine thanks to a well-crafted vocal melody, which as with the previous tracks comes drenched in echo as if the protagonists were drowning under their own self-created wave.   Revisiting the darker tones of ‘Mourning Tide’, ‘Between Daydreams’ hints at a ‘Faith’-era Cure influence with its slow and methodical approach, descending beats occasionally giving way to a huge wash of keyboards and multi-tracked voices. With a nod to New Order during the closing instrumental section, this tapping into classic dreampop/indie presents the band’s best side – by some distance – the mix of wistful voices and accessible drones only too happy to revel in a deep nostalgic glow.

Last up, ‘Watercolors’ is a little twee, bells and voices reminiscent of The Dream Academy.  Once again, there’s a theme of water, the sea, the sun…and eventually a few too many drum machined quirks. While you’ll have heard the band channelling similar themes and influences in a better fashion elsewhere, it’s worth a listen for some decent Peter Hook-esque deep bass and a very melodic guitar motif lurking within a world of reverb.

Despite the brief flirtations with calypso, these five songs have much to offer. ‘Gently Down The Stream’ is worth checking out on the basis of the excellent ‘Between Daydreams’ and thoughtful ‘Mourning Tide’ and while the other songs aren’t quite up to the same standard, fans of this particular style should find something quite absorbing.  Even when things don’t quite reach full potential, The Soft Spots carry things off with a reasonable amount of style.