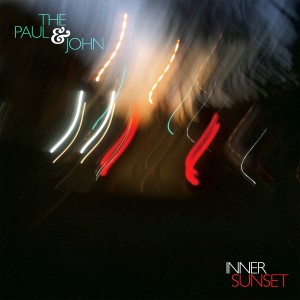 A band comprising two pop loving friends John Moreman and Paul Myers, the knowingly named The Paul and John bring some power pop gold on ‘Inner Sunset’, a collection of tunes written over a three year period.  Fans of the rockier end of the genre will hear traces of many old favourites on this disc – Roger McGuinn, Alex Chilton, touches of Nick Lowe and even Soul Asylum…and, yes, a nod to them Beatles – but as with most acts ploughing a similar musical path, the homages are loving.  Taking those influences and melding them with some great hooks, The Paul & John are almost guaranteed to please.

The movement of the sun, as if this set of songs were taking place within a strict time period, is central to the album – the sunrise represented by ‘Inner Sunrise’, a short, but upbeat intro constructed of simple chords and reasonable harmonies.  With sun-up, it’s down to The Paul & John to convince us that ‘Everything Comes Together’ on an admirable opener, pop tones aplenty, chiming acoustic guitars colliding with a soft synth sound underpinned by simple beat.  In terms of lead vocal, there’s a natural singular voice channelling the kind of Byrds-esque love heard from latter day Teenage Fanclub or the more focused parts of Stephen Lawrenson’s ‘Obscuriosity’.  Wholly accessible, this sun-filled ditty brings plentiful backing harmonies, placing The Paul & John at the forefront of retro pop.  Cranking up the electric guitars, ‘Long Way Back’ shows the duo’s other musical love as they engage in a joyous new-wavish tribute.  Tiny fragments of Costello and the earliest Tom Petty inform this ode to post-punk days of homemade cassettes and musical obsessions.  The tune is bouncy, but the chorus is a harmonious hook indeed – thoughts of youthful times, innocence and days we’ll never get back are surely ready to strike a chord within most prospective listeners.

Although a strong start, it’s with ‘Hungry Little Monkey’ the duo really deliver.  The drums mark their place with a solid beat, the full sounding bass noodles across a great harmony, while simple guitar leads add a rootsy edge.  It’s not really about the lead flourishes of course, in The Paul & John’s retro universe the jangle is where it’s really at and the rhythm guitar melodies do not disappoint in this respect.  A strong musical base is home to some natural harmonies and another reasonable chorus – in all making the duo sound like they’ve hit upon a collaborative sound that pulls as much from their late 70s heroes – a touch of Dwight Twilley here and there along with Tom Petty’s sense of simple melody – as it does ‘Untitled’ era Rembrandts.  The increased sixties tones of ‘How ’Bout That’ taps into the more melancholy elements of Merseybeat at first, a nasal vocal over thin guitar chords more than hinting at a love for the younger John Lennon, before a full band rises for a mid-section with warm bass and well-constructed solo.   Best of all, the harmony drenched ‘You Can’t Be Too Careful’ brings some classic pop/rock, all twanging guitars and sly smiles, the end results sounding like an unheard track from The Major Labels project from a few years previously.  There are some great guitar melodies throughout, but it’s the verse’s similarities to Farrah’s ‘Missed The Boat’ which really pleases, both in terms of memorability and use of classic power pop structures.  Granted, fans of the genre will not get any great surprises overall – like most pop practitioners, tP&J are happy enough with the tried and tested. The genre rarely sets out to push new boundaries; the main aim – and here more than most – is to ensure the attendant listener is given an uplifting experience.

Somewhere between these great tunes are the other time-checks, courtesy of ‘Inner Sunset’ and ‘Inner Sundown’, both requiring more spins than the duo’s strongest offerings before they click, though both go some way to help this album feel like a fully realised piece.  The former brings some quasi-glam stomping that’s guaranteed to lift the spirits, but it’s the finger-picked acoustic of the latter which really works.  Perhaps more complex than some of The Paul & John’s work, this soft tune brings equally understated vocals, always adding to the laid-back mood, but never outshining the tune, which after a slow start really brings things to a heartfelt close thanks to even more harmonies and a clanging Rickenbacker-esque solo, reinforcing an admiration for Roger McGuinn.

Full of shimmering chords and sunny harmonies and with just enough deviation into slightly rockier territory to keep things lively, ‘Inner Sunset’ is a really solid power pop outing. With a duo rising to full band potential, this is a cult classic in waiting.  The record Quakers On Probation possibly thought they’d recorded, and a record near equal to past works by Edward O’Connell and Bleu, it’s certainly a record that fans of power pop will absolutely not want to miss.