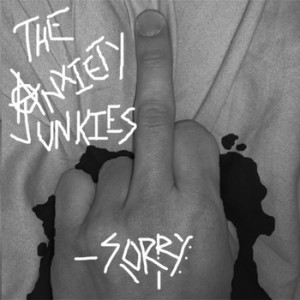 Hailing from Savannah, Georgia Anxiety Junkies are a four piece hardcore punk band revelling in the sounds of the early 80s.  Although a little looser in feel, this demo EP recalls much of the attitude within  bands like Reagan Youth, early 7Seconds and Minor Threat.

In just under seven minutes, ‘Sorry’ – a four song recording and the band’s first as a quartet, complete with bassist – gets the band’s intentions across with the minimum of fuss.  It’s not as quick off the mark as you’d expect, though, since opener ‘Surf Song’ is a little slack around the edges and weighs in at a relatively lengthy two and a half minutes – positively indulgent considering the typical genre constraints.  Even so, this number works well as an intro to the four musicians.  After a count in, Charlie Dirkx’s guitar lays down a thin but aggressive rhythm, while the accompaniment of a loud bass from Dalton Benkert provides the track highlight, his playing melodic and tight.  Meanwhile frontman Van Tyler Mills adopts a naturalistic and shouty approach to each line – somewhere between Kevin Seconds and the teenaged Ben Weasel.  It’s obvious what the band are aiming for here, but beyond an interesting bass part, there’s not always the energy such a recording usually demands.

Luckily,with the second track ‘Heartrate’ the band really come alive. In under two minutes there are all manner of buzzsaw guitar sounds and live sounding drum crashes.  Mills spits his words at full throttle and with such venom, it’s almost impossible to ascertain where his anger is being directed, at least until the main refrain of “you’re not the centre of my world” really asserts his power and antagonism.  Firmly taking the reins now the band have decided to attack their instruments at full pelt, Alex Greenberg smashes hell out of his cymbals and snares – a trait he fully embraces for the rest of the release. Following suit, ‘Paranoid’ brings more of the same, in half the duration. The simple refrain of “Paranoid, you’re paranoid” more than passes muster as a hook – it is as angry, simple and direct as the musical backdrop.  Elsewhere it’s almost impossible to hear what Mills is angry at again…or indeed why…but it really doesn’t matter.  This is a fine piece of hardcore – a number only improved by the raw edge of the DIY recording.  It should come as very little surprise, then, that Anxiety Junkies’ parting shot doesn’t veer too far away from the previous two bursts of anger, but in truth, ‘Self Sabotage’ is the pinnacle of everything this band is aiming for. The shredding guitar sounds are in full force, while the busy basslines have a stronger presence than previously heard, Benkert’s fret work at frenetic pace throughout.

It may start a little slowly (relatively speaking), but ‘Sorry’ shows a definite promise. The majority of the material has a classic hardcore sound that’s almost guaranteed to impress anyone who still reaches for those Gorilla Biscuits records for their hardcore jollies.  This is one of those recordings that just proves, yet again, that no matter how many decades pass since Minor Threat’s demise, hardcore punk in its purer incarnations never sounds tired, even if the musical path often appears well trodden.