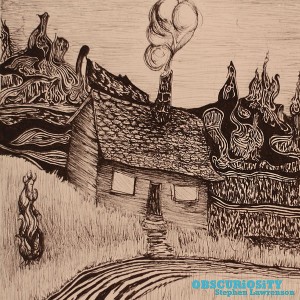 Somewhere behind the retro childrens’ book artwork and drab brown packaging, Stephen Lawrenson delivers ten pieces of relatively sunny adult power pop on his debut release for Kool Kat. Fans of the genre will undoubtedly have fun in spotting the dozens of influences this particular singer-songwriter has twisted into his own vision, but while, by the time of its closing notes, ‘Obscuriosity’ has found its feet to become a great piece of work, it doesn’t actually start off too impressively…

With rather a thin sound, opening track ‘Your Karma’ begins the album in a somewhat wobbly fashion. Taking the psychedelic fuzz favoured by ‘Frosting On The Beater’ era Posies, Lawrenson lumbers through a couple minutes of stomping retro rock. The DIY budget mixed with the slight distortion leads to the drum track having no real presence; instead just a shimmering rhythm that’s rather distratcting. Lawrenson’s voice, too, appears to have been treated in a similar fashion, which overall makes the track sound like a near charmless trebly dirge. Occasionally, a backing vocal will cut through like a tiny ray of sunshine, but it’s nowhere near enough to make things any more tuneful. Much better, the title cut pulls elements from sixties jangle-pop and a touch of seventies goodness to make a reasonable pop ditty. The guitars chime in a way which shows love for the British Invasion, while layered vocals mix classic pop and a touch more psych, all topped off with a simple, twangy guitar solo. There’s clear potential here.

A couple of songs in, it becomes evident that ‘Obscuriosity’ is far better than it first appears. After the first couple of tracks, things really settle in…and what follows is a world of classy pop. The DIY budgets are still in evidence, but Lawrenson’s gift for simple and classic melodies are much more in force. ‘Edge of the World’ presents a clear ringing semi-acoustic guitar line, and a haunting vocal melody which – despite being presented within a different genre, occasionally hints at early work by English progsters Big Big Train and the seventies work of prog/psyche influenced singer-songwriter Anthony Philips. Once the whole band joins (and it’s worth pointing out here that it’s not really a band at all, since Lawrenson plays everything) things shift towards retro pop. The lacking budget still makes the rhythm section feel a little too lo-fi, but the joy within the multi-tracked vocal makes up for any potential weaknesses. A genuine classic, ‘Words To Say’ pulls a ringing sixties guitar riff from Lawrenson’s bag of tricks and matches it with a Beatles influenced pop vision (circa ‘A Hard Day’s Night’) before chiming in with a killer Rickenbacker solo, for extra lovely Byrdsness. Throw in an electric piano and a truckload of harmonies and it almost becomes impossible to tell when this was written and recorded.

Jellyfish afficianados will find themselves smiling throughout ‘Small White House’ as a rumpty-tumpty piano, mellotron tapes and a McCartney styled sense of fun cuts across a brilliantly executed three minutes. Perhaps this may be the album’s most predictable number, but that tried and tested approach makes it one of the most instantly appealing. In a carefree manner during ‘Thank You’, crashy guitars bring back more of the Posies vibes which began the album , but instead of weighing everything down with reverb, things are bouncier all round, with a carefully balanced mix of guitar rock and sixties pop in a Big Star style. If “lack of bass” is a criticism which could be levelled at ‘Obscuriosity’ at times, ‘2nd Time Around’ makes up for that. Although not necessarily one of the album’s better songs – a harmony filled chorus doesn’t quite push itself for maximum impact, the guitars are just a bit too pedestrian – the bass line is fantastic. It almost rescues an otherwise ordinary outing.

Having already explored moods of Posies-inspired fuzziness and plundered the archives of pop in a Stuermer/Manning fashion pilfering little nuggets along the way, Lawrenson offers another acoustic based ditty and something else in the Posies/Teenage Fanclub mould, before ending this musical journey with something unapologetically schmaltzy. Following a few atmosphere building keys, ‘Pale Yellow’ builds a strong piano line around a tune which resembles Henry Mancini’s ‘Moon River’ before settling for a solid selection of hard struck chords, ending up a touch Lennon-esque, topped by synth strings and a treated vocal which has a big presence. While truly epic a closing statement, this could just as easily be the work of a completely different artist to the one who gave us ‘Your Karma’ barely half an hour earlier. Therein lies a recipe for potential long lasting enjoyment…

‘Obscuriosity’ is an album which may not click straight away; this is something that has really not been helped by the track sequencing. The home-spun sounds tends to have a habit of muddying the songs on occasion, but repeated listens prove there are some great songs within. There are times when this album has the feel of a compilation disc, so whether those Beatles are your bag, or you want some Harry Nilsson/Badfinger influenced easy pop, or came looking for some all-out Posies/Teenage Fanclub fuzz, it should greet your ears with something appealing.