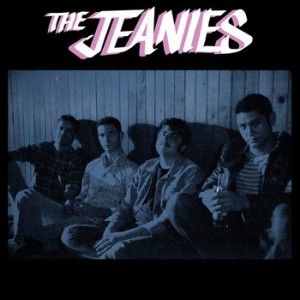 Hearing the record for the first time is an odd experience.  Fans of the style will instantly recognise some well-arranged retro sounds and some killer songs, but sadly, listening to them can be somewhat hard on the ears since the tiny budget afforded to the recording results in a DIY recording that’s of no more than old-school demo quality.  What we have is the sound of some guys who sound like they’re recorded live in a rehearsal room, when really, their sounds of teenage love and endless summer days really need a multi-tracked, glorious listening experience.  Repeated listens allow the quality in the song writing to shine through on some great choruses, but the lo-fi experience – whether out of necessity or stylistic choice – never seems entirely right somehow.

Looking closer at some of the songs, ‘Believe Me Jenny’ is among the stand-outs. A fat bassline courtesy of John Principio marries a lovely jangling guitar, creating a timeless musical backdrop.  At the point it sounds like it’s gonna be a good number, it becomes a great number with the key change into a simple sing-along chorus.  This homage to the likes of Big Star almost rivals Boston’s brilliant Gigolo Aunts for inspiration even if the DIY recording detracts somewhat from the end product.  ‘The Girl’s Gonna Go’, meanwhile, has a really groovy edge, its style heavily influenced by the US power pop of the mid 70s.  The rock ‘n’ roll edge is definitely much closer to ‘Shake Some Action’ era Flamin’ Groovies than Farber’s own Greasy Hearts, while the bubblegum pop leanings show hints of that age’s lesser-known acts Artful Dodger and Pezband.  Here, it’s the rattling drums and a clanging rhythm guitar that remain the driving force, although unfussy attempts at harmony vocals and a well-played rock ‘n’ roll lead guitar break really round out the sound.

‘I Seen Her Dance’ jivvies along with a power pop groove that’s very vocal-centic -again with a more than reasonable chorus – but is let down in places by a flat drum sound.  Like ‘The Girl’s Gonna Go’, it’s helped somewhat by an enthusiastic lead guitar from Jon Mann and, after a few plays, it’s hard not to get swept along with its simple hook.  ‘That’s The One’ taps into an almost Merseybeat sound in the guitar depot at first – think ‘Needles & Pins’(-ah) – but pretty quickly the band revert to muted chords and more of their tried and tested power pop sound with a smidgeon of Dave Edmunds’ rock ‘n’ roll revivalism and Dwight Twilley thrown in for good measure.    Louder and slightly brasher than most, ‘Gotta Get Back To Judy’ employs a crashy intro that (again) recalls Gigolo Aunts (albeit in a lo-fi incarnation), before blooming into a fast paced workout that’s heavy on the rhythm. This tune brings more enthusiasm via a strong chorus and some wilfully out of tune “doo doo”s, all the while giving Dylan Handelman one hell of a workout.   I Think You’re the Wrong One’ shows more Flamin’ Groovies love and proves the band could really hit the mark with a pop appeal and a fine harmony – again, it’s a shame there’s not a fuller sound…but turning the volume knob approximately five notches in a rightward direction at least gives a spot on indication of the band’s live sound.

The rest of the disc brings more of the same, though not always with the same instant appeal.  The title cut cranks up the drumming aggression, ‘It’s For You’ is a valiant attempt at garage-pop reflection, ‘Her Flesh’ echoes from the back of the room like a ghost of sixties teenage breakups…each delivered with passion, even if the audio sound requires a lot of goodwill from the listener.

There are at least four real gems among this albums ten retro sounding cuts.  As previously mentioned, It does take some time to get to grips with the sound…these songs so honestly deserve so much more of a send-off than they receive on this recording.  Each of the numbers is played with love, but the rehearsal room sound and general rawness detracts – and initially distracts – somewhat.  Maybe somewhere down the line, The Jeanies could re-record some of these with a bigger budget with either Chris Difford or Kurt Baker at the controls… Now, that’d really be somethin’.