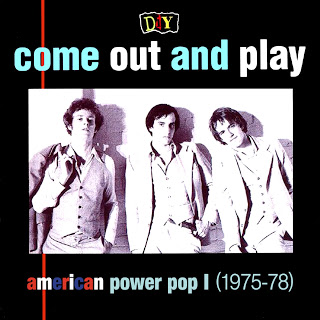 I kid you not when I tell you this selection of pure gold nuggets and curiosities from the USA’s first wave of post 60s power pop makes for pretty much essential listening. Taking their cues from The Byrds and Big Star, a whole suave of bands paid homage to their heroes and opened new musical avenues in the process.

Kicking off with (now) well known ‘Shake Some Action’ by Flamin’ Groovies, you might know what to expect. There are plenty of 60s influences here and while possibly one of the best known tracks to be included as part of this collection, it’s not the best by any means. That said, it’s still good and very representative of this bands mid-late 70s stuff. ‘Wayside’ by Artful Dodger has a more contemporary 70s feel and much less garage sound. If you don’t know these guys and like Cheap Trick, I have a feeling they’re worthy of investigating. Sadly, to the best of my knowledge (and at the time of writing this) their three albums are out of print and have never been issued on CD, so that’s about all I can say about them. I’d really love to hear more, so if anyone can shed any light, that’d be great.

I was never a great fan of Billy Squier, but have often thought I should check out his old band Piper, purely on the strength of their song here. ‘Can’t Wait’ is great pop, but as you might expect, has rockier guitars than some of the other bands here. It took me quite a while to appreciate how good this track is, as I’ve never been especially fond of Squier’s vocals, but its quirky musical arrangement has a complexity which makes it stand out more than some. That’s all relative though; don’t expect kitchen sink complexity of a Todd Rundgren standard. This CD offers two cuts by The Nerves, fronted by future Plimsouls man Peter Case. The first, ‘Hanging On The Telephone’ will be familiar to all, having been covered by Blondie who made the song a hit, despite not changing its arrangement in the slightest. The almost punky energy still makes this two minute song as vital as it was back in the late 70s. The second Nerves track, ‘When You Find Out’, is pure straight-up 60s R&B. Wearing influences clearly on their sleeves, this honest tribute to The Zombies and The Yarbirds is equally essential listening.

‘The Summer Sun’ by the almost legendary Chris Stamey is also very strong. It’s another sixties inspired song (as with most of this wave of power pop), with a strong chorus and vocal melodies. The over all arrangement doesn’t veer at all from very familiar territory. For a better example of what this man can do, check out ‘(I Thought) You Wanted To Know’ from ‘Shake It Up: American Power Pop Volume II’ [reviewed elsewhere on this site]. Cheap Trick, like the Flamin’ Groovies, will require no introduction. ‘Southern Girls’ is from their ‘In Color’ album; a classic of the power pop genre – maybe even a bona-fide classic in its own right.

I must be missing something here. I’ve read in a few places before that The Scruffs’ album ‘Wanna Meet The Scruffs’ is a classic. Based on the track here, The Scruffs leave me feeling somewhat underwhelmed. Musically, it sounds fine – a little Big Star, a little Pezband, but vocally it grates. The singer’s voice is strong, but has a slightly odd croony tone, like the vocalist from Prix, but not quite that bad. This is one of the few tracks here which I find myself skipping regularly, alongside The Names, who don’t do much for me for pretty much the same reasons.

Upon its single release, ‘Christi Girl’ by The Flashcubes supposedly wasn’t bought by many people. Some sources have claimed that it could be found in bargain bins in many of New York’s record stores. The song itself isn’t that bad. It has more than a nod to Gary Puckett rather than Big Star, which makes me think that had anyone actually heard it at the time, it may have reached a slightly broader audience than some power pop releases. Having missed out on success the first time around, The Flashcubes re-united in 1993 and recorded new material. You can read more about them at their official website.

After a twee intro, ‘All Kindsa Girls’ by The Real Kids is a cult classic. Showing the energy of the Flamin’ Groovies but less of an obvious sixties influence, this song has a proto-punk energy and as with The Nerves, should appeal to those who never quite understood the classic Ramones raw dumbness. As for this compilations title cut, performed by The Paley Brothers, one can assume they were either deathly serious or going for full sugar-overload with a knowing wink. There are handclaps, Phil Spector inspired glockenspiels, and a general infectiousness that’s as annoying as it is entertaining. It’s like hearing ‘Sugar Sugar’ by The Archies given a dusting down by mid seventies pop genius. I love it. I hate it. I love it.

Closing this compilation is the haunting ‘I Am The Cosmos’ by Big Star man Chris Bell. There’s a definite uneasiness to parts of this recording. While not obviously bleak like some of the songs from Big Star’s ‘Third’ (recorded after Bell’s departure, interestingly), and despite ringing guitars and a full band arrangement, there’s something in this song that’s a little unsettling It sounds like a man with the world on his shoulders, not quite beautiful, never ugly, always fragile. Not a fist-in-face cry for help, but it comes as no surprise that after leaving Big Star in Alex Chilton’s hands 1972, Bell attempted suicide a few times. He would eventually die in a car accident in 1978. ‘I Am The Cosmos’ is up there with the best of the Big Star stuff and can be easily found elsewhere on the ‘Big Star Story’ compilation CD.

This CD, issued by Rhino in 1993 is now out of print. You owe it to yourselves to try and track one down.