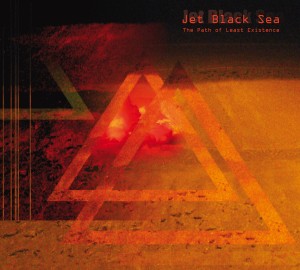 The title track presents itself in two halves, bookending each end of the musical journey, totalling some eighteen minutes.  The opening of the album (and the first eight minutes of the title cut) brings some of JBS most spacious sounds – an echoing choral voice begins things in a somewhat spooky manner, a feeling of unease soon increased with the addition of a mechanical heartbeat.  By the time those two elements come together in an almost rhythmic disharmony, a selection of droning keys rise, their old-style blanket approach combined with the heartbeat beg strong comparisons with ‘Stratosfear’ era Tangerine Dream.  Jones, meanwhile, offers occasional soaring guitar notes, disjointed at first, but each sound slowly pulls the listener closer to the heartbeat.  After a few minutes of this, the mechanized rhythm explodes into fatter beats giving the tune a more definite structure – a deep bass beefs everything, while the guitar parts explode into a Gilmour-esque array of sounds.  While the guitar lines are strongly fixated with a seventies prog vibe, the electronic backdrops strongly evoke ‘Mezzanine’ era Massive Attack, thus ensuring JBS’s take on ambient and electronic noise pulls as much from the nineties and beyond as blowing dust from a well-worn mid 70s template.  This musical statement eventually concludes with an explosion of distorted sounds complimented by a minimalist clean piano.  In many ways, this is a good signifier as to what you can expect from the rest of the album, but there’s plenty more of interest along the way.

With a selection of quieter electronic sounds, ‘Outnumbered’ begins like a score from a horror movie, its cold and stark stance elevated farther by the return of the voices from the album intro.  Those voices seem somehow detached from everything, yet are crucial in the bigger picture.  A friendlier sound is signified by the presence of occasional key strokes – these, not so much musical as an Eno-esque mood colourant – before soft drum loops link everything.  Simons’s piano eventually takes a dominant role, but the electronic sounds are there constantly filling space almost suggesting a mid-80s Vangelis piece.  This alone would fill  the eight and a half minute duration – and almost does – but a brief foray into rock territory brings a barrage of drums and a fierce solo from Jones as he fills several bars with sounds far more reminiscent of his other band.   ‘The Law of Diminishing Returns’ delves deeper into cold, ambient sounds with feedback squalls lurking behind a piano, the sound gradually rising, rising… Big guitar chords, echo in the rear until…BOOM!…a slow and measured rhythm is pounded out – the end results sounding like one of Tool’s scary segues underpinned by John Bonham.  The whole thing is designed for Jones to lay down long notes in an almost feedback inspired fashion, before throwing the more prog-traditionalist solo into the mix.  His playing is confident throughout and with plenty of string bending, the end results challenging the chunky rhythm for dominance.  The second half of this track is far closer to Nine Stones Close than anything else on ‘The Path of Least Existence’, yet at the same time, it steel feels much more cinematic, with each sound stretching wide enough to suggest a 5.1 mix would be a very interesting prospect indeed. If Jet Black Sea haven’t grabbed you by now, there’s a chance you may not ever get what the duo are aiming for with this project…

‘Worst Case Scenario’ brings something of a curveball.  At the point where electronica and prog seems to be the over-riding musical themes, this segment (the album is certainly a whole suite as opposed to tunes that can be listened to individually) brings elements of jazz, with marimba sounds clanking in an offbeat, almost circular rhythm complimented by disjointed drums and occasional guitar squeals.  Towards the end, the guitars pick up and a few metallic chords do their utmost to smother the clanky sounds, with Jones even teasing with an atonal lead on occasion. What it lacks in a melodic sense, it gains in terms of rhythmic intensity, the repetitive nature never letting go from the second it begins.  Some may hear traces of Peter Gabriel’s ‘Birdy’ soundtrack, others the relentless rhythmic drive of Stewart Copeland’s brilliant ‘Rumble Fish’ score; there’s undeniably a touch of Frank Zappa in its jazz-infused flair…but whatever is going on here, it’s a real wakeup call after some of the more low-key sounds.

Proving to be very much an album of reflection, the slightly more avant-garde approach of ‘Worst Case Scenario’ is instantly counterbalanced by a brief suite of tunes of a much more mellow persuasion.  ‘Cage of Myself, Part I’ reinstates the album’s heartbeat as an aural fixing point while a few synths map out a dark path.  Clean toned guitars occasionally hint at the work of Steve Rothery circa 1985-7 as they churn out the same simple refrain.  Minimalism is the key here – the guitar compliments the heartbeat with something almost as natural, flowing and mechanical.  The repetition sucks the listener in as far as it can, aided by tinkling new age bells until ‘Northern Exposure’ showcases piano lines from Simons in an almost neo-classical style.  His gift for melody would ensure the piano would stand alone if required to do so, but a few droning sounds are on hand to give his musical arrangement a stronger link to the previous parts of this journey.  Bringing the interlude to a close, Jones offers a few lead guitar notes as the piano reasserts itself with some soft lead bass, before moving back to the main melody from ‘Cage of Myself’ for a timely reprise.  While clearly the most ambient part of the album, there’s a great sense of melody throughout and never a note wasted.

‘The Jet Black Sea’ provides another jolting reaction to the quiet music, with heavy usage of clanking rhythms from an analogue keyboard.  These busier noises are strongly reminiscent of Tangerine Dream’s ‘Force Majeure’ from 1979 (and more specifically parts of ‘Cloudburst Flight’), while the obtrusive drones are pure 80s sci-fi.  There’s more than a trace of influence from Brad Fidel here, but JBS take this and really intensify it – the results ending up rather unsettling.  This cannot fill a full seven and a half minutes, of course, so a deliberate switch to something gentler comes at the midpoint.  Symons takes up the piano once again, delivering intermittent but dominant chords, while Jones launches into a particular fine guitar solo behind a slow mechanised beat.  There’s some fine playing from both here – the guitars hold their own against a blanket of synths and as the final notes fade, it’s easy to find yourself wondering how much longer it could have gone on for without sounding needlessly repetitive.   Pulling this slow, atmospheric journey to a close, the second half of the title cut begins with absolute minimalism.  A quiet drone invites the return of the voices that began the journey nearly an hour previously and crashing drums gradually fade in from the rear.  Naturally, there are elements here you’ve already heard throughout the album’s opening eight minutes and beyond, but their return is very much welcome and the resultant ten minute climax – if indeed something so soundtrack based could be called climactic – finishes the disc in style.  Of particular note throughout is Jones’s lead work, once again – he approaches his instrument more aggressively here than ever, flaunting a tone that sounds like a Gilmour solo played with plenty of distortion.  Fantastic stuff.

Forget Pink Floyd’s ‘Endless River’ – as good as that million selling behemoth may be, this particular atmospheric water crossing is far more interesting.  While its core influences should be obvious to some listeners, none of the music is reliant on any recycled musical themes and often manages to sound as emotional and heartfelt as many a much better known prog/experimental band.  Simply put, ‘The Path of Least Existence’ is essential listening for those who enjoy a lot of proggy or soundtrack based material.   The Nine Stones Close albums are good…but this, quite frankly, is in a whole different league.