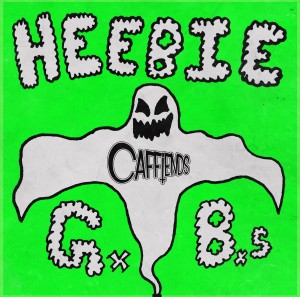 Orlando’s Caffiends play good, raucous punk that’s strongly influenced by early Screeching Weasel, The Vindictives and NOFX.  Since their formation, they’ve issued several EPs and shared stages with The Ataris, The Queers, Swingin’ Utters, Teenage Bottlerocket and numerous other top bands.  2014 saw the release of a sixteen track full-length release reissuing a bunch of out of print tunes, so for those who’ve yet to experience the band that record is an excellent way to catch up.

Issued at the end of the summer of the same year, the ‘Heebie GBs EP’ comprises seven previously unreleased numbers – five studio, two live – each capturing the band in full throttle.  Lead track, ‘86 My Mind’ is arguably the best of the bunch, a simple ode to switching yourself off, delivered with a classic 90s punk arrangement and an intensity befitting of the best punk-pop outfits.  The intro shows Caffeinds to be more than mere thrashers, as a mid-paced muted chords and rattling cymbals build up the tension before everything falls away to expose a brilliant bassline – the style of which owes a great debt to Fat Mike and NOFX at their finest.  Beyond that, the band go all-out for punk thrills with a vocal that’s as hard as the music, between the main thrust of which different spoken voices add a quirkiness (the deepest of which sounds a great deal like Ben Weasel).  The rhythm section are excellent throughout this opener – the complex basslines and thrashing drums outshining everything. Throw in a fairly sloppy lead guitar (clearly influenced by the likes of The Queers) to finish and – in punk terms – this is a number which very much ticks all of the right boxes.

‘Blind Them With Dental Floss’ cranks the speed and in under a minute, Caffiends channel Screeching Weasel circa 1990 at a breakneck pace.  The thunderous drums spur on a dual vocal – one voice with a yelping intensity and a brattishness that’s so well suited to the music, while the other growls in a style more akin to JJ Nobody – while the guitar fill empty spaces with a surprisingly full sound. Each of the band members gives their all here – maximum speed before reaching inevitable burnout – but the lasting impression is left by those drums, sounding like their being smashed into oblivion by a man with extra limbs and unrelenting throughout. ‘Remember To Forget’ is a mid-paced pseudo Ramones affair carrying one of the EPs best riffs – four chords and a world of attitude – while a shouty gang vocal ensures this is the most singalong tune of the bunch.  In lieu of a guitar solo, the band adds extra bubblegum goofiness via a selection of handclaps worthy of The Mr. T Experience, before going in for a second verse and an extended play out which fuses a discordant guitar solo with controlled tapping effects.   Each of these three tunes shows a slightly different element of Caffeinds’ punky style and all are required listening.
[These tracks were simultaneously issued as a split 7” with fellow Florida punkers Wolf Face]

‘Sea Lab’, meanwhile, represents the EP’s weakest offering.  As before, there’s a great rhythm guitar part, but much less interesting elements backing that up this time around: the drums often rely on a more simplistic pounding, while a harsher vocal delivery recalls The Broadways/Lawrence Arms man Brendan Kelly.  The all round harshness is counterbalanced by a deliberately silly lyric “If you’re looking for me, you better check under the sea”.  It doesn’t detract from the EPs best material though, since it’s in and out within barely thirty seconds.  With another dual vocal and staccato guitar lead, ‘Moving On’ represents Caffiends at their most melodic. As with ’86 My Mind’, the rhythm section provides the real meat, while the blending of a sneering punk vocal and higher register (dis)harmony really catches the ear. There’s nothing especially original in the overall approach – it’s punk-pop 101 – but the result is hugely enjoyable, especially if you happen to be a fan of classic punk-pop inspired by Groovie Ghoulies, Lawrence Arms et al.

Finishing the release, a couple of live tracks show how raucous the band’s approach to live performance can be.  Following various bits of banter, a rendition of ‘Dental Floss’ tears past at lightning speed, before an equally blistering tune, credited as ‘Fuck’ – all sweat and cymbals – is the audio equivalent of a punch in the face.  Although the announcement name-checks The Steinways and refers to ‘Fuckmarket Fantasy’, the performance itself bares little to no resemblance to The Steinways’ own ‘Fruitmarket Fantasy’…  Whatever, it’s the sound of a great punk band going batshit on stage; that energy is captured excellently during this recording and that’s really all that matters.

Caffiends clearly love what they do…and for an obviously DIY release, most of these tunes push all the right buttons.  The end results may seem instantly familiar – certainly constructed from a sum of obvious influences – but even so, this EP is worth checking out, especially if you like lots of 90s bands from the Lookout and Epitaph stables.   [The whole release can be streamed and purchased using the widget below].