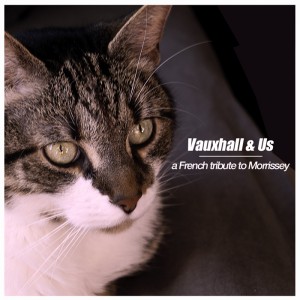 The world has seen release of many tribute albums, many tossed off with casual indifference that miss the mark completely.  Occasionally, one comes along that’s just so misguided you end up wondering how it came to be in the first place.  The idea of thirteen different low-key French artists recreating Morrissey’s 1994 album ‘Vauxhall & I’ could easily sound like a bad one from the off, but somehow, through an array of reasonable talent – not to mention excellent source material and sheer balls – ‘Vauxhall & Us’ works.  Without Morrissey’s distinctive croon adding to a many a black humour within his lyrics, these songs sound markedly different.  Their charm is still often apparent, but in a wholly different way.  The acoustic setting on some of the recordings allows Moz’s gift of words to remain the biggest draw of all, but the European slant evident from time to time also lends a certain charm.

While most of the covers are enjoyable, a few stand out.  A recording of ‘Why Don’t You Find Out’ by REZA works largely around a mid-paced drum and a reverbed electric guitar.  When placed against such a guitar line, the use of crooning vocal makes this recording sound suitably dark – almost shoegazy even – and the end results sound like a cross between The Czars and Fatima Mansions.  There’s a strong melody driving everything forward, of course, but the fuzzed up guitar cranking from the right speaker turns this from a good cover to a great one.  Equally delightful – but for entirely different reasons – is the version of ‘The More You Ignore Me’ offered by Agop.  Stripping back the mournful pop and delivering it as a folk-pop jangle is a masterstroke, the sunny mood only serving to twist the original bitter lyric into a sinister half-smile. The results sound as if this once hit single has rested somewhere between an old Housemartins demo and the work of UK folk duo Trevor Moss & Hannah Lou.  Agop’s sparing use of male/female harmonies makes comparisons to the latter all the more evident.

In the hands of Yules, the thoughtful ‘Now My Heart Is Full’ is simply gorgeous.  A finger picked acoustic guitar provides the bulk of the instrumental melody, while a plucked upright bass marks time, these two instruments providing the music’s essence.  At the point where a deep voice joins the arrangement, there’s a feeling we’re headed for Tindersticks town, but as things gather momentum, it turns into a different beast entirely.  With the addition of a gloriously played string section and some beautiful folksy harmonies, the track ends up like a cross between The Dream Academy, John Grant and Fleet Foxes.  This alone makes ‘Vauxhall & Us’ a worthwhile project – it’s essential listening.  Solid rather than flashy, Garciaphone take ‘Lifeguard Sleeping, Girl Drowning’ and turn it into a dark psychedelic piece that sounds a lot like a Radiohead b-side (‘OK Computer’ era), its use of minor keys, droning guitars, understated vocals and something that sounds like a harmonium coming together in a hugely appealing fashion (unless you hate early Radiohead, of course).  In contrast to the darker arrangements, Errant Tusk’s version of ‘Speedway’ is 80s pop-tastic, as if The Killers had covered an old forgotten number by Fiction Factory.  Unashamed plunky synths, shiny rhythm guitars and a simple vocal work together excellently: for those willing to keep open ears, this cover is rich in entertainment value.

As for the rest of the cover versions here, they’re not always as immediately striking, but surprisingly, nothing’s ever awful.  A couple of acoustic-based artists bring pastel shades to Morrissey’s stock-in-trade sneering on ‘Billy Bird’ and ‘Hold On To Your Friends’; ‘Spring Heeled Jim’ gets a clanky electronica makeover (complete with a French-accented John Cale impersonator on vocals), while ‘Used To Be a Sweet Boy’ brings clanky electronic beats and clicks, a dark guitar part and some even darker vocals.   The best of the rest, Uniform Motion twist ‘Lazy Sunbathers’ into a tune heavily reliant on bottom end drones tempered by occasional strings, a hushed vocal and measured chords played on a Fender Rhodes to decent effect all round.

In a world where the internet allows us to hear the complete works of The Beatles retooled for ukulele and Pink Floyd’s ‘Dark Side of the Moon’ recreated as 8-bit music, there’s room for imaginative tributes to almost everything.   Since most of ‘Vauxhall & Us’ are so entertaining, we can only hope one day that other DIY artists are willing to take on the hits of Morrissey/The Smiths and  recast them in a Eurovision-esque ‘Puppet on a String’ mould.  …Although what Morrissey and Marr would make of their thoughtful compositions being replayed in the style of their heroine Sandie Shaw is anyone’s guess.

[‘Vauxhall & Us’ is available for FREE DOWNLOAD via the widget below.]