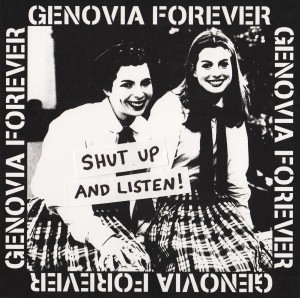 During ‘Green Hair Girl’ the energy within the rehearsal space is furious, the atmosphere tense.  Very little attempt has been made to clean up the raw sound – approximating an angry noise that often makes Kathleen Hanna’s Bikini Kill appear slick by comparison.  Somewhere within the chaos, there’s a tough band thrashing it out on a number which sits somewhere between the earliest works of Government Issue combined with Adrenaline OD.  After a sweaty thrashfest, the band adopt a slower pace for the closing bars, with Kyle Hall’s guitar chopping away at chords that strongly recall classic Agnostic Front.  Vocalist Kathleen Gullion, meanwhile, screams every line with an irrefutable anger, almost like the words are cutting through her larynx, resulting in a track that best shows off Genovia Forever’s intentions.

Similar intents fill ‘Fairview Street’, a drum fuelled howl of anger culminating with sceams of revenge [“hope to destroy me / makes you feel better / I need revenge after meeting you again”].  The music may not stretch any boundaries, but the collision of relentless guitar chords colliding with Scott Suiter’s cymbals – a wall-to-wall barrage of noise – shows that this four-piece has potential when it comes to sheer speed and fury. ‘Manarchist’ packs a hell of a lot into just 45 seconds. Beginning with a chugging riff straight out of the 7Seconds school of playing, the band start to crank their gears slowly at first, before exploding into a quickfire burst of anger where Kathleen appears to vent more grievances.  The title naturally has strong overtones of this being a feminist piece, though the vocals are so fraught and distorted it’s only really possible to decipher tiny parts of any message that lies within [a key line “I called you on your bullshit!” appears one of the most obvious touch points].  Just as soon as it arrives, it’s gone, with barely a pause before GF plunge headfirst into their next lightning speed settling of old scores.

Delving into their softer side  temporarily, the Princess Diaries themed ‘Love Song For Lily Moscovitz’ brings a slower tempo that resembles tracks from the Sick of It All 7” EP, while the lyrics suggest a kinship/sneering hatred with the film’s fictional character [“You really work those dots / I think I have a crush…let’s save the world together!”].  Before long, the band have reverted to making a hugely blusterous sound at lightning speed and although it doesn’t differ so greatly from anything before it, it has the benefit of making bassist Hadley Gephart more audible.  After an intro dominated by cymbals, ‘Avant Garden’ quickly finds its feet as a tough garage rage; it’s a number that, again, finds Kathleen spewing a lyric concerning revenge [“nobody deserves abuse but how can I forgive you?”].  The band could be in danger of labouring a point by now, but the sheer speed and brevity of each number ensures that nothing gets tiresome in the slightest.

Saving the best for last, ‘Natural Disaster’ tears along like a bastard hybrid of Discharge’s angry ‘Why’ EP from ’81 and NOFX’s ugly debut from three years later.  The thrash guitars are immense buzzsaws laying waste to anything in their path, the ridiculously lo-fi recording technique just adding to the tension while Kathleen screams every line as if she’s about to explode.  It’s often hard to ascertain what the band are so angry about since most of the lyrics here – and, indeed, elsewhere – are lost in amongst the general musical conflict, but they’ve got attitude…  It might be about the state of the US but, then again, it may be about something that went a bit awry in the fictional land of Genovia; based on previous tracks, of course, it’s most likely to be about an old relationship. It’s the energy that’s of most importance, though – and naturally there’s plenty within this extremely lo-fi punk.

it’s sometimes hard to know whether the occasional obsession with The Princess Diaries is meant to be ironic.  Something is certain, however: the EPs six numbers add up a pretty uncompromising seven minutes and – ironic lyrical content or not – these guys clearly love early 80s hardcore.

2 thoughts on “GENOVIA FOREVER – Shut Up And Listen! EP”