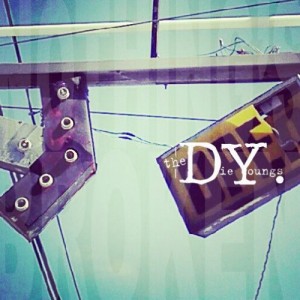 Maybe not completely, however.
Over the years, both Smith and Wright had stockpiled a selection of demos for numbers that – for whatever reason – never felt right for whatever band(s) they happened to be working with at the time.  With The Great Affairs caving in to their rockier cravings and Smith and Wright working so well together, it’s odd that none of their orphaned songs found a place there.  Eventually, the pair decided the only sensible thing to do would be to form a side project to allow these oddities and would-be-leftovers a chance to take root…and so The Die Youngs were born.  On ‘Nothing’s Broken’ they offer thirteen of their also-rans in a fully recorded form for your delectation – most of which are good, but within those are also four or five absolute stunners.

One listen to the title track and you have to wonder why it wasn’t considered” right” for The Great Affairs.  All the right ingredients are present: an alt-country jangle pepped up by a very subtle lapsteel crying under a wall of rhythm guitars, a superb chorus and confident vocal.  In fact, this slice of country rock is incredibly infectious – worthy of many of the subgenre’s better known practitioners; the Gin Blossoms springing to mind almost instantly.  Smith takes a typically husky approach to each line, managing to bring a sparkle to the well-worn maxim of everything being “all over bar the crying”, his hushed delivery is given a lift throughout by the classy arrangement. Similarly rootsy, with a sprinkling of pop, ‘I Am Reborn’ presents a whole world of semi-acoustic grooves and lavish harmonies.  With another strong melody throughout and a cheeky guitar break to boot, it won’t strike anyone for its originality, but it doesn’t ever suffer for sounding overly familiar: in fact, fans of Danny Tate’s second album – the all too overlooked ‘Nobody’s Perfect’ – will find an almost instant love here.

‘Something In The Air’, on the surface, is a piece of country rock perfection, blending finger picked guitar and a quiet vocal on beautifully crafted verses, before hitting the listener upside the head with a shiny AOR chorus, ending up perhaps closer to some of the material from Bon Jovi’s pastel coloured ‘Lost Highway’ than The Great Affairs.  Some unexpected strings add extra finesse…but wait, what’s that?  What possessed the band to smother the last verse in robotic auto-tune?  It almost ruins a fantastic song…how lucky it is that everything else within this particular four and a half minutes is terrific!  The basis of ‘Seven Days’ flirts with another Great Affairs sense of melody but pushes it in a far more country direction again, but whereas the pop sounds of ‘Something In The Air’ are so appealing, this number’ slower approach makes it slightly cloying in the longer term. Given that the track features contributions from Sugarland bassist Dave Webb and Travis Tritt sideman Tony Paoletta (whose appearance on pedal steel is almost invaluable in giving this number most of its feel), the country outcome is unsurprising.  It’s not an unpleasant tune – far from it – but is unlikely to strike a chord in the long term with rock listeners.

The Die Youngs’ output is more of a mixed bag from here on out – the sound of a band trying stuff to see if anything sticks, even if some still comes with a distinctly alt-country basis. This is very much the case with ‘Just Someone I Used To Know’, a stab at something that aims for the heart while melding acoustic and electric elements with old-style organ.  The basis here is strong, the individual parts well-intentioned, but overall it lacks a little zing.  The end result sounds like a cast-off from the sadly forgotten Five Easy Pieces – a band whose one release stands as a roots rock classic.

Although there are only four or five cast-iron classics here, there ‘s some good material scattered across the remaining forty plus minutes of this disc, but in some cases it’s much easier to gauge why it needed a new outlet and a new gathering of musicians to give it life. With more of a rock vibe, the chuggy guitar edges of ‘Breathe Again’ bring an urgency to a tune that settles somewhere between country rock and the power pop of American Hi-Fi.  The chorus may not be as instant as some, but the full sound bought by the band as the hook blooms from the muted verses ensures it has a certain degree of charm.  Better still, ‘Dirty On The Stereo’ is particularly surprising, owing far more to The Click Five and throwaway teen pop than The Replacements, much beloved Black Crowes or, indeed, any of their usual touchstones.  A staccato guitar line, pumped bass and shameless handclaps bring a knowing sense of classic new wave sounds before everything explodes in a harmonious vocal chorus of sugar-coated brilliance.  This sun-filled joy could be considered ultimately disposable, but everything is lent the necessary edge via a brief but hard guitar break.

With the long genesis of some of this material and the different times and moods in which it was conceived, ‘Nothing’s Ruined’ ought to be an odd curio of songs set aside for the devoted. …And it is.  Like any decent collection of oddments, though, when the songs work they’re superb [‘Nothing’s Broken’, ‘Something In The Air’]. When they don’t , it’s still easy to see what the band were aiming for – and at least that’s something.  This manages to be more than a curio, though: thanks to the decision to re-record the material fresh and not present demos from a selection of eras, these songs are allowed to appear in their full glory and at least sound as if they were meant to be heard in this format.  Thanks also to a keen ear when it came to selecting the final songs, at least half of this first offering from The Die Youngs is as good as anything you’ve heard from the Denny Smith/Kenny Wright camp previously.  In a few cases, a couple of these tracks may be their best yet.