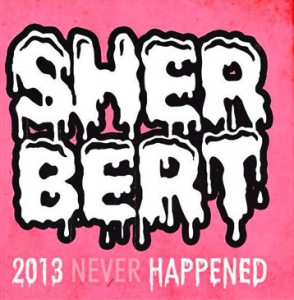 Their first full length, the arrogantly titled ‘2013 Never Happened’, isn’t really a debut album as such.  It’s a compilation rounding up everything the band recorded throughout the year – a handy overview for those who missed the earlier releases.  Instead of being given the band’s sugar-fuelled jangle-pop in short bursts, it’s all here in a glorious twelve track explosion that’s very much a celebratory homage to the sounds beloved by the NME in between 1989-92.

An instant standout, ‘The 70s’ combines a hefty garage beat with an almost surf tone.  Drenched in echo and reverb, the band’s vocalist and primary songwriter Michelle Sullivan sounds like an upbeat reincarnation of Drugstore’s Isobel, while the rest of the band pull influence from retro grooves of both the 70s and 90s.  The backbeats are strong, the guitars have presence, but the real star here is Bobby Emmett, whose upfront slabs of keyboard end up sounding like a cross between Clint Boon and an old-fashioned cinema organist.  Also instantly striking, the marching style of ‘Ohio’ really hits the mark with an unshakable 4/4 beat crashing against a set of simple bar chords.  Helping to give things a lift, Sullivan’s very knowing vocal style is naturalistic yet melodic.  Although there’s nothing new in their chosen style, between these two numbers, you’ll instantly know whether Sherbert’s retro sounds will entertain.

If you’re unsure as to whether there’s any sense of kitsch intended with Sherbert’s brand of pop/rock, look no further than ‘Bills/Pills’, a sixties inspired pop ditty that’s a dead ringer for early Dressy Bessy, albeit fronted by someone who can sing in tune.  Again, the band are tight – a special mention for Wes Burkhart, placed higher in the mix, he shows himself to be a man who knows the importance of the bassist’s role.  The hooks here are sugary and almost instantly memorable, a simple lyric bolstered by some cheeky “ba ba ba’s”.  In honesty, this is the kind of tune that Dressy Bessy wish they’d written.  The band aim for repeated results in this field with ‘This Never Happened’;  it lacks the instant enjoyment of ‘Bills/Pills’ and it’s wordless joy, but in terms of sugary retro cool, it’s more than pleasant enough.    Taking a more serious tone – and almost worthy alone of your listening time – ‘Cut Dead’ is about as perfect a slice of downbeat, echoing dream pop as you’ll find this side of Mazzy Star’s ‘She Hangs Brightly’.  Simplistic and unfussy, the chiming guitars and breathy voice are just lovely.  It isn’t anything groundbreaking, just a simple tribute to a few great bands that paved the way.

With a sharp pace, ‘Stupid Hat’ recalls the jangly end of ‘Lovey’ era Lemonheads, fuzzy guitars battling for attention against a busy bassline and brilliant, yet simple hook. Sullivan’s accented and curly voice occasionally channels the younger Kristin Hersh, while tackling something far more frivolous than the Throwing Muses ever would.  Again, it’s largely derivative of the band’s influences, but that never makes it bad.  Just as ‘Bills/Pills’ showed Sherbert are happy with bouncy pop, this number – clocking in at barely ninety seconds -shows they can rock out with equal ease.  Also excellently rocky, ‘Problem Child’ stokes up the distortion, playing it off against something that would otherwise be a sunny pop number, resulting in Velocity Girl influenced goodness.  The near cymbal-less backbeat has a great attitude with its no-nonsense approach, while a couple of multi-tracked vocals flesh out this wall of sound.  Both numbers are first class examples of retro indie rock – and are absolutely enthralling for listeners who loved this style in 1991.

Perhaps most intriguing of all, at least for older indie-pop fans is this release’s cover tune: ‘A Good Flying Bird’ by DIY legends Guided By Voices.  The original composition (as heard on GBV’s ‘Alien Lanes’ LP) featured co-leader Tobin Sprout hammering on an electric guitar chopping at three chords at speed, while the boombox recording techniques gave his voice a natural distortion.  As with that original GBV recording, Sullivan appears with electric guitar almost unaccompanied, her playing slightly slower than Sprout’s, her vocal slightly more polished and beefed up by a backing vocal on the main hook.  A tambourine marks time quietly and overall, there’s a tiny sense of this version being better recorded.  That’s not to say they’ve lost any of the Guided By Voices spirit, of course, this is still very lo-fi, –  in fact, it would be nearly impossible to say it were anything but loving homage.  [A free mp3 can be grabbed here]

Forgive them the fact that there already existed a band with the same name who had a worldwide hit single in the 70s; try, too, to forgive them the fact that nobody in the band can actually spell “sherbet”. Sullivan’s happy-go-lucky approach results in some rather fun material and this  is a very enjoyable outing.  Although not as consistently fully formed as some of its influences, ‘…Never Happened’ is strongly recommended for those who like Blake Babies, Mary Lou Lord and a bit of fuzz ‘n’ jangle within their pop.