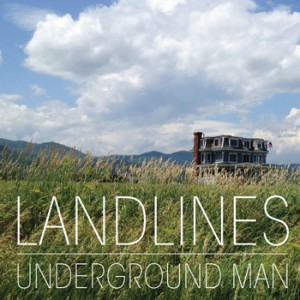 Including a sharp, twangy guitar and multi-tracked harmonies, ‘Not Impressed’ is perhaps a step up from previous work.  Its main melody sounds fleetingly like something Evan Dando would have considered for his mellow solo record ‘Baby I’m Bored’, before a more sixties folksy influence colours the chorus, where Adams plays with a few multi-tracked harmonies.  The vocal is a touch flat here and there, but as always with The Underground Man, it’s best remembered these are not always the most polished recordings, but even so, it is usually possible to hear Adams’s intentions – and there’s the core of a decent song here. ‘Bad Vibrations’ places Adams in his most comfortable environment.  This number is largely concerned with interplay between harmony voices, while simple keyboard accompaniment and the usual acoustic strums provides a strong backdrop for a great, if slightly downbeat melody.  Like a rough Neil Hannon demo, the melody and gentle whimsy makes up for any technical shortcomings of this homespun recording.

Reminiscent of a Merseybeat ballad, on ‘‘Night Go Away’, Adams indulges another inevitable 60s homage, a decade obviously close to his heart.  While his voice is far from perfect and the low budget recording leaves much to be desired sonically, those people who actually heard the first EP will encounter something here that’s sure to feel familiar straight off, with the end result sounding a touch like a Merseybeat ballad.  With a jaunty rhythm and counter-vocal, ‘Someone’s Gone’ bounces along with an optimism uncharacteristic of The Underground Man’s preferred melancholy moods – and knowing only too well that this a feelgood statement, he goes all-out for the tune.  Not only does he craft a genuinely excellent power pop chorus from the line “someone left the sunshine on!” but also includes a tinkly glockenspiel solo where many would have just opted for some major-key guitar work.  This is great fun all round – and, without question, this EP’s best song.

In many ways it’s a shame Greg’s songs aren’t allowed the luxury of a bigger budget (especially true of something like ‘Someone’s Gone’), but on the other hand, The Underground Man’s sometimes charming ditties make excellent working demos, thus allowing a candid glimpse into his world of unpretentious song-writing. Straight from the reel-to-reel tape recorder to your speakers, you can download ‘Landlines’ for free using the widget below.