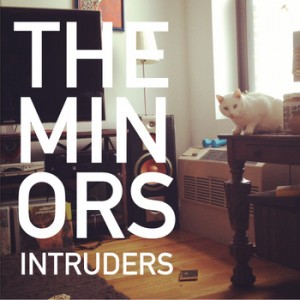 The EPs strongest track ‘Tight Nights’ has a great rhythm guitar part where its muted strings land somewhere between 60s rock ‘n’ roll and an 80s new wave approximation of something similar.  Greg’s vaguely croony voice sounds interesting in its slight melancholy against such upbeat tunes, while the shuffling drum creates a solid backline.  The end result resembles an enjoyable DIY pop song.  ‘Wrong Girl’ amps up the old time rock ‘n’ roll aspect, with a spacious arrangement where the bass is the dominant force.  A naturalistic vocal battles against a reasonable doo-woppish backing harmony and a slightly carefree twang takes lead.  There’s a great idea here, but something doesn’t feel quite right, even after a few plays…

Across four minutes, ‘Moon Date’ takes The Minors’ previous fascination with retro rock ‘n’ roll, dressing it up with some 60s power pop (a la Flamin’ Groovies) in the process.  There’s a strong bassline bouncing away throughout, a hooky chorus complete with the necessary handclaps and a brief but quirky solo.  Much like ‘Wrong Girl’, the individual ingredients are all promising, and yet, it occasionally feels a little flatter than it perhaps should:  it’s here, more than ever, The Minors’ sound could be tougher…and definitely needs a greater sense of urgency.  Looking at what we have though, that bassline is genuinely excellent and the band’s enthusiasm shines.  Rounding things up to “proper” EP length, the short but quirky ‘Make Up Your Mind’ takes that great bass work and works out something short  and 50s-esque, around which Greg’s voice carries the rest of the tune.  Those who heard the 2012 release by The Underground Man should feel an instant affinity with this particular track – the easy 1950s jazziness at play resembles the core of that mystery artist’s work…and with very good reason, too.  If you hadn’t recognised his voice by the end of this number, that’d be a surprise!

There are some potentially some good musical ideas lurking within these songs and The Minors’ brand of retro pop jostles along quite merrily, but the band only truly hit the mark a couple of times.  The “close but” feeling that’s definitely left by a couple of the numbers isn’t necessarily anything at all with budgetary constraints, however, as  Greg previously released a genuinely enjoyable EP on a shoestring budget – it’s more to do with the lack of hard twang The Minors’ material honestly deserves.   Taking things more at face value though, ‘Intruders’ is fun – and its available for however much you feel it is worth.  You can take a listen or download it for keeps using the widget below.