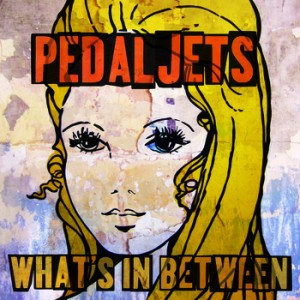 Pedaljets released two albums in the late 80s and attracted a cult following, before splitting somewhat prematurely in 1990. Despite having supported Hüsker Dü, The Replacements and Meat Puppets (all of whom have long been considered cornerstones of the pre-grunge alternative rock and punk scene) and gaining national attention from the US press, the band have been largely overlooked in the rock history books.

After some twenty three years away, the band reformed and reworked their self-titled second record (a record they were unhappy with upon original release), before setting about all new material.  ‘What’s In Between’ – the first brand new fruits of an unexpected reunion – recall many elements of the late 80s scene that many dubbed college rock, taking in sounds that are occasionally comparable to The Replacements, Uncle Tupelo, early Soul Asylum et al, so in many ways the band just pick up where they ended.  For those already familiar with (the) Pedaljets, this will certainly not be a considered as a bad move…and the album isn’t without merit.

With a rumble of drums and a selection of handclaps, ‘Riverview’ presents Pedaljets at their most typical.  Atop the steady and measured rhythms, the ringing guitars are straight from college rock’s glory years, while the tune itself does a great job in recalling that “early 90s, but influenced by the late 60s” mood – the backing vocals are ragged, yet full, while a fuzzed up lead vocal gives things a garagy feel, that’s most welcome. Okay, so it’s not got as much broad appeal as a latter-day Paul Westerberg composition, but has a strong structure.  Another stand out tune, the clean and far more commercial, ‘Conversations’ brings out a few acoustic rhythms, while a piano and basic rhythm lead things in a brilliantly pop-fuelled rumpty-tumpty – the kind that ‘Ghost Is Born’-era Wilco excelled at.  If nothing else on this record, this is a track that will have the broadest appeal for a casual listener with its improved vocals and sense of lightness.   Those looking for a bit of punchy rock might find appeal in the ragged ‘Nothing Boy’, a garage-rock affair that sounds for all the world like The New York Dolls covered by 80s Soul Asylum.  It’s a bit raw but its basic trashiness wins out, resulting in a couple of minutes worth of retro goodness.

If ‘Conversations’ shows how the band can be great arrangers if they put their heads together, this shows that when they strip things right back, they can rock as hard as some of their closer contemporaries from way back.  It’s also worth mentioning that although this was borne from a twenty first century reunion, it taps into a near-timeless alternative rock sound that even the most aware genre-buff would struggle to pin a date to.  Although to a slightly lesser extent, the same timeless feel benefits the sloppy ‘Tangled Up’, which although not always musically polished, benefits from a pleasing bass sound, another catchy hook and the appearance of a riff that’s reminiscent of the intro from Rod Stewart’s ‘Maggie May’ – maybe deliberately, probably not.  A few of the harmonies are distinctly…uh, wayward…but like the great Replacements, that only ever adds to the fun!  [Downloading both these tracks from the below Bandcamp widget is recommended.]

On the flipside, the woozy ‘Are You The One’ has a vocal that emerges somewhat lazily with a little southern twang.  Although counterbalanced by shinier rhythm guitars, the slow approach at first sounds as if it may drag, but before long the band have pulled the listener into their slightly drunken affair – resulting in something that sounds like Jeff Tweedy and Wilco parodied by The Flaming Lips.  It’s certainly far, far less tuneful than The Pedaljets are generally capable, but props to them for somehow making this work!  ‘Measurement’ revisits so many sounds from the early 80s, it is difficult not to feel a warm glow of nostalgia as it emerges from the speakers.  The drawled vocals are perfectly suited to the tough rhythm guitars, ending up sounding like a collaboration between The Psychedelic Furs and ‘Hootenanny’-era Replacements.  Even the middling recording budget brings out the best in this track, its slightly murky sounds just perfect for the slacker vibe that ensues.  It’s not as well-arranged as ‘Conversations’, but is still one of this comeback album’s strongest tunes.

The rest of ‘What’s In Between’s material is unobjectionable in the main, though rarely sets out to provoke any strong feelings.  Existing Pedaljets fans will certainly herald their return with a fanfare regardless of the end product, but for the unfamiliar – like middle period Replacements – this may sound like a potentially sloppy affair.  It definitely takes time before its merits show themselves fully, and even then, those without copies of ‘Hootenanny’, the Hüskers’ ‘Flip Your Wig’ and other Minneapolis oddities may not fully connect.  A couple of instant hits can be found within, but ‘What’s In Between’ is a slow-burner, for sure…