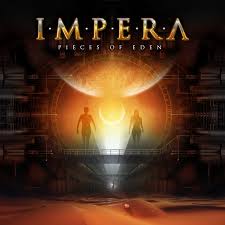 A year later, ‘Pieces of Eden’ reunites JK Impera, Denander and Alfonzetti for much more of the same…but if anything, they’ve improved on their previous offering.  Their tough edge is in full flow during the chunky ‘This Is War’ – a track that combines Dio-esque riffs and old-school vocals in such a way that it’s hard to argue with the force behind the band’s sound.  Alfonzetti tackles every line with ease – his voice maintaining such presence, he makes it easy to skim over a couple of potentially embarrassing sentiments – while Denander’s lead guitar chops hover between melodic and flashy without ever upstaging the rest of the musicians.  Leaning farther towards AOR, the intro to ‘These Chains’ features a slightly filtered, cleaner sounding riff, leading the band into a great piece of mid-paced rock.  While the main hook of “take these chains” is well-worn, Alfonzetti’s cannot be faulted, his slight rasp underpinned by some understated harmonies.  This is a tune which would benefit from a few stabbing keys to bring out even more of its commercial appeal, but looking at what’s present, each band member plays to their best strengths: the rhythm section is hard and tight, while Denander’s two lead breaks have just enough taps and sweeps to please.  His lead work is flashy, but far, far from emotionless showboating.

‘Smalltown Blues’ combines an upbeat bounce with a few choice harmonies, in turn giving Mr. Alfonzetti the kind of thing he tackles with ease and the bombastic ‘Fire and The Flame’ shifts into bombastic territory, allowing him to show off more of a range, while Denander hammers out a huge riff.  Neither of these tracks appear taxing to any of the musicians, but the end results are as enjoyable as anything from the Impera debut.  Elsewhere, beneath the melodic ‘Goodbye’, the rhythm section get chance to take more of a lead – here, during the verses, JK’s drums take on a fantastic, cymbal-free tribal edge while during another melodic chorus, bassist Mats Vassfjord cranks out plenty of distorted, overdriven notes, his fingers sounding incredibly busy.  The whole thing adds up to being a little crowded, but it’s not bad at all.

While most of the album ranges from a very good to excellent standard (with absolutely no filler), one track stands head and shoulders above the rest: ‘Since You’ve Been Gone’ is absolutely first class bluesy hard rock.  The slow blues vibes recalls similar material from Gary Moore’s mid-late 80s albums, allowing Afonzetti to show what a first-class vocalist he really is, approaching every note in a professional and measured way, never pushing his range too far – the low notes evoking the young David Coverdale, the harder edge occasionally hinting at the range of sometime label-mate Chris Ousey.  In fact, in this tune we have something that certainly rivals Ousey’s Snakecharmer – this particular number would have suited that band very well indeed.

It could certainly be said that nothing on this release is likely to change the world, but then pushing boundaries isn’t ever high on Impera’s agenda.  Taken at face value as hard rock in the classic mould, ‘Pieces of Eden’ absolutely stomps over ‘Legacy of Life’.  It is an album that all AOR/melodic rock fans would be proud to have in their collection and proves that long after this brand of rock was in its prime, when done this well, it’s still hard to beat.