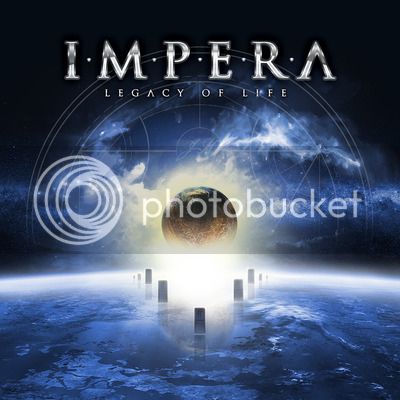 This release doesn’t always push the much-loved guitarist’s talents to unchartered levels, but that’s understandable since some of his previous work has been pretty special.  As always, though, he knows where his strengths are and his melodic chug often brings out in Alfonzetti’s voice, who in turn, sounds as good here as he did over two decades previously.  Unsurprisingly, their combined talents go some way to make Impera’s debut, in the main, a very enjoyable offering.

The blistering, driving hard rock of ‘More Than Meets The Eye’ presents the band at their hardest, where the riffing is very much of the melodic Euro metal variety (just resting on the good side of Yngwie Malmsteen’s more soulless equivalent).  Over the riffs, Alfonzetti pushes his voice to the limit – though never sounding like he’s having to try that hard – and Mr Impera puts in one of his most energetic drumming performances, but it’s Denander’s solo which is the number’s best feature.  During that solo, he cuts loose on a fast break, with plenty of melodic metal picking topped off by a couple of squealy notes to finish – he’s capable of better (as evidenced elsewhere), but in terms of choosing the right solo to fit a space he proves to be one of the best, up there with Scorpions man Matthias Jabs.  ‘Shoot Me Down’ has a similar old-school musical attack, its verses carefully balancing a sharp rhythm guitar part with a strong lead vocal.  It fares a little better, though, thanks to a more melodic approach on a chorus.  While it’s a little “leather trousers” in its execution, Alfonzetti puts in a rousing vocal performance – that alone may be just enough to win you over and (hopefully) enough for you to pull out those long neglected Jagged Edge CDs.

That kind of upbeat rock is fun enough in the hands of Impera, but it’s when tackling material of a more mid-paced variety these guys often sound at their best.  ‘Dead End Street’ is such a number – while the very melodic vocal and pumping rhythm section hold their own throughout, it’s Denander who totally steals the show: his main riff is chock full of rhythmic tapping, while his lead break is nothing short of terrific, absolutely loaded with fretboard histrionics.  Adopting a meaty stomp, ‘Is This Love’ is a harmony driven rocker, akin to a heavier Whitesnake/Rainbow hybrid.  As expected, the lead performances are top notch, but it’s Vassfjord who plays the key role during this tune, his slow yet unmovable bassline providing the centre point from which Denander works his riffs and solos.  Given a slow and moody backdrop, Alfonzetti  stretches his voice in a very pleasing manner, the slight scratchiness on some notes adding further to a gritty but hugely melodic mood.  A touch faster, ‘Show Me The Money’ finds the whole band in fine form.  With a slightly funky groove, the cocky posturing driving this tune clearly comes naturally to these guys – and so it should, given their combined session pedigree.  Another combination of solid riff, good chorus and strong lead vocal make it stand up easily, but that said, this album has no obviously weak tracks.

The rest of the album’s material is built from similarly tried and tested melodic rock blueprints, but is none the worse for its “don’t fix what ain’t broken” mentality, especially given the great musicianship from each member.  Matti Alfonzetti sounds like the consummate professional throughout and with a voice that has stood up to the passing decades excellently, it’s somewhat of a mystery as to why he is not much better known, especially considering previous connections to Thin Lizzy’s Scott Gorham…

This release certainly doesn’t ever attempt to push any genre boundaries, but the combination of solid songs featuring both Afonzetti and Denander in fine form makes ‘Legacy of Life’ a disc which should certainly be enjoyed by many rock fans of a certain age.