Two years on and with ‘The Final Frontier Tour’ a fading memory for all, Iron Maiden announced a re-release of their much loved 1988 ‘Maiden England’ VHS on DVD.  With that came news of a “retro tour” where the band planned to revisit a selection of their 80s material, in a setting not too dissimilar to the fire and ice stage set of ‘Seventh Tour of a Seventh Tour’.  Huzzah!  Regardless of whether people love ‘Brave New World’, ‘Dance of Death’ et al, it’s the 80s material that still makes Maiden so beloved by most – so this tour would be definitely be a special one.

For what felt like the longest time, the only confirmed UK date was a headline at the 2013 Download Festival.  Since festivals aren’t the preferred setting for everyone, surely they had to announce other UK shows?  For a while, it actually looked like they might not – it had already been a long haul by the time of Download – and then a week after that festival in June, the band announced they were to play London’s O2 in August…and the August 3rd gig at the gargantuan sized venue sold out in twelve minutes.

This second show – staged the following night – sold exceptionally well and saw Maiden playing to a near-capacity crowd. From the opening bars of the ‘Seventh Son’ album and as the band launched into ‘Moonchild’, it was possible to feel a wave of nostalgia and as the band thundered through their mega-hit ‘Can I Play With Madness’ and the cast-iron classic ‘The Prisoner’ (still one of their best tunes thirty years on), the intensity rose further still.  Bruce Dickinson charged around the stage with the energy of a man almost half his age, while the twin leads of Adrian Smith and Dave Murray still possessed the magic they did in 1982.  A few dodgy sound levels meant that half of Smith’s solo during ‘The Prisoner’ was briefly lost in the wall of sound, but this minor hiccup was quickly rectified.   With the arrival of the brilliant ‘2 Minutes To Midnight’, the band were really on fire – such a vigorous performance, you’d have to forgive Bruce for missing odd words and fudging other bits; it’s very hard to sing while catching your breath, running at speed…  While Maiden threw themselves headlong into the tune in the manner which befitted its first live airings on the 1985 ‘World Slavery Tour’, third guitarist Janick Gers skipped around the stage in a rather amusing manner.  [As a man who didn’t actually play on most of the recorded versions of the material on this tour, he’s almost redundant at times – playing rhythm, windmilling like Pete Townsend, throwing shapes, etcetera. It could be argued that Maiden don’t really need three guitarists at all, but it was gentlemanly of them to keep Mr. Gers in place after Adrian rejoined].

After a blistering opening, Bruce then formally (or as formally as Mr Dickinson ever gets) greeted the huge crowd.  Upon hearing the opening notes of the sombre ‘Afraid To Shoot Strangers’ – one of only two songs in the evening’s set to post-date the 1980s – various pockets of people left the crowd for a toilet break.  Who didn’t see that coming…?   For the band, the change in pace was inevitable, though considering this tune that leans more towards the band’s later epic, almost proggy sound, is not necessarily a fan favourite and mightn’t always suit the mood, this was a wonderful airing, complete with Gers marching on the spot in a really overblown manner.   The opening bars of ‘The Trooper’ saw groups of people rushing back from the gents to witness a full-throttle performance pepped up by some enthusiastic flag-waving from Dickinson, although the first appearance of Eddie during this particular performance was more than a bit flat.  In the ’80s a man lumbering on stilts in a suit and mask may have impressed gig-goers, but by this point it’s just sad.  The theatrical element of ‘Number of the Beast’ fared far better, with the band joined by a red-eyed devil glowering from stage left. Its slow, mechanical movements lending an ominous presence.  Since the band clearly know what to do when it comes to models – even the two giant mechanical Eddies still work well – maybe they need to focus on those; they certainly need to retire the poor sap whose job it is to stomp around in costume night after night…

The middle of the set saw the band revisiting the largely overlooked single ‘The Clairvoyant’, ‘Run To The Hills’, Adrian Smith’s wonderfully commercial ‘Wasted Years’ (marred slightly by Dickinson’s insistence in talking over the intro), a full scale ‘Seventh Son’ and similarly epic ‘Phantom of The Opera’. The latter is a tune which sounds as vital in 2013 as it did in 1980, with its distinctly different phases coming together to form a great musical suite.  Again, Dickinson might have been better not talking over one of the instrumental sections, but when he’s hyped up it seems you can’t stop him! 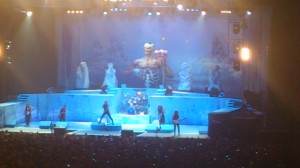 As with ‘Afraid To Shoot Strangers’, a  brief voyage into the 90s via a similarly atmospheric rendition of ‘Fear of the Dark’ – good as it was – jarred a little.  Although both 90s era tunes would have been better replaced with ‘Die With Your Boots On’ and the under-rated ‘Still Life’ (to make things more in keeping with the 1988 shows), it is likely these were included instead to give Gers a fuller role – it’s only fair.    As with every Maiden show since 1847, the main set pulled to a close with a rousing ‘Iron Maiden’, this time joined by the most impressive of the models – a full scale Eddie with jiggly foetus and fire-skull.  Sometimes it might be nice to surprise people and throw in another vintage track at this point instead, but if nothing else, ‘Iron Maiden’ allows an easy, familiar climax – its high speed rock and stage theatrics coming together with relative ease every time…and this night being no exeption.   Even that largely forgettable Sonisphere show had this kind of climax in its favour.

More fan favourites rounded out the inevitable encore, as the band thundered through ‘Aces High’, ‘The Evil That Men Do’ and ‘Running Free’, ensuring most people went home happy and on a high, probably wanting more.  Like ‘Iron Maiden’, ‘Running Free’ is the perennial live staple for the band – although it’s unlikely if most of this wholly devoted audience at the O2 would have been gutted if the band had chosen to end with something else, just for once.

Overall, this was a fantastic performance and a great setlist.  As with all setlists, there were always bound to be a few favourites left behind [it would have been good to hear ‘Where Eagles Dare’ and ‘Revelations’ – maybe even ‘Sun and Steel’…would it kill them to play this neglected gem once in a while?], but it was hard to find fault with the sequencing of the chosen numbers.  Dickinson’s voice might not have quite the edge it once possessed, but this was still a show from a band far better than most others of a similar age – maybe not quite at the top of their game…but certainly nowhere near the bottom and the fact they still appear to be having fun after so long seems obvious.  Their eighties material still shines brightly and is a reminder – if one were ever needed – of why they are still capable of attracting new, younger listeners to hard rock and metal music, despite musical fashions changing so much since the days when Maiden were considered one of the scene’s heavier acts.