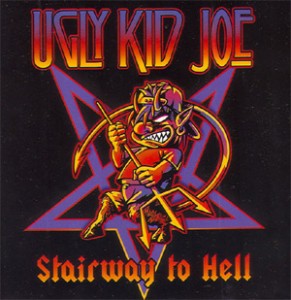 Following their 1997 split, life after Joe saw the band’s last line up exploring other musical avenues. In an unexpected move, frontman Whitfield Crane replaced Mina Caputo in Life of Agony; guitarist Dave Fortman became a studio producer engineer [his work includes helping with the long gestation of Anthrax’s blistering ‘Worship Music’] and drummer Shannon Larkin worked with a succession of bands including Amen and Godsmack.

In 2010, the last line-up of Ugly Kid Joe [originally active from 1994-97] reformed for live shows and eventually returned to the studio.  The first release from the reunited band – 2012’s ‘Stairway To Hell’ – is traditional Ugly Kid Joe in that it’s a very mixed bag.  Some of the riffs are heavier than the casual admirer is likely to expect and there’s surprisingly little here as snotty or as flippant as ‘Everything About You’ or ‘Neighbour’ [and that, friends, is a good thing – all bands need to mature eventually]; ‘Stairway’ is a release that often puts the band’s more mature talents to fantastic use.

The opening track ‘Devils Paradise’ may just be the finest tune to ever grace the Ugly Kid Joe catalogue.  Mid paced riffs pave the way throughout an impressive stoner rock inspired four minutes – a timely and rather unsubtle reminder that UKJ were always Sabbath fans, even though half the world likely remembers them as beer-fuelled beach trash.  Above the fuzzy riffing, Fortman’s lead guitar is impressive as it wails out long and very slightly grubby leads and beneath the layers of guitars, Cordell Crockett’s bass thumps, as he anchors down an already unshakable arrangement.  …But the big question is, how does Crane sound?  Pretty fabulous, in fact.  Far less sneering than his younger self, his voice here has a commanding presence that suits the music.  Listening even more closely, there’s something hugely familiar in his wobbling and oddly pitched delivery and eventually it becomes glaringly obvious – is he deliberately impersonating Bon Scott?  If so, he’s doing a half-decent job of it.  If it’s just a happy coincidence, it’s a good performance – and one which ought to put the reformed UKJ back on the map.

‘You Make Me Sick’ is a tough hard rocker, with a little of the band’s funky edge creeping in.  Don’t be fooled into thinking this will somehow make it a revival of their early 90s sound, though… the riffs are chunky, almost grungy in places, in a way the original UKJ didn’t always have the maturity and edge for despite probably having the talent.  Crane’s curly voice taps into something gravelly – a much more serious voice – resulting in something that sounds like UKJ meeting with the light end of ‘Deliverance’ era Corrosion of Conformity.  While it’s only right that a mature band should have moved on from trashy jock shit, by this early stage, this has already shaped up to far better than anything most people would hope for from any kind of Ugly Kid Joe comeback.

Turning the fun up just a notch, ‘I’m Alright’ presents a stomping slice of (near) glammy metal.  With many different elements culled from the classic rock cannon, the simple riffs allow Crane ample room to stretch his vocal, while a fuller chorus is reminiscent of something akin to Bang Tango jamming with Duff McKagan’s Loaded.  It’s already strong enough to hold the attention, and then the mid section takes an unexpected turn and UKJ decide to pay homage to early AC/DC.  Unlike that opening number, any Bon Scott-isms here are entirely deliberate as the vocal sits atop ‘Powerage’-era Malcolm Young muted guitar chords and a pumping one-note bass evoking the work of Cliff Williams.  While not necessarily as strong as ‘Devil’s Paradise’, it’s definitely designed for maximum impact in the live set.  Bringing yet another mood to the table, ‘No-One Survives’ is a number full of downtuned acoustics, akin to Days of the New.   Like ‘I’m Alright’, it’s another number of two distinctly different moods, as when building to that inevitable climax, UKJ tackle post-grunge riffing head on – likely inspired by Larkin’s time serving as Godsmack’s resident tub-thumper.  Tackling the harder parts of this piece in the manner a stoner-rock frontman might, Crane clearly learnt something during those years with Life of Agony, despite never recording any studio material with them.

After some great material, this release finally takes an almost inevitable dip with ‘Love Ain’t True’.  Make no mistake – there are some great elements present: yet another solid riff, a careening, rather trashy guitar solo and reasonable tune.  An annoying, brattish vocal of not much more than shouting quickly kills this track though, and while the presence of brass should have evoked the early Aerosmith circa ‘Get Your Wings’, a huge compliment of trumpets etc just makes everything a little claustrophobic.    The fun, rootsy ‘Another Beer’ quickly removes the bad feelings left behind by this tune – and it would take a hard heart not to enjoy the back-porch Joe tapping into something simple, yet so complete sounding thanks to some great dobro work.

Fleshing out the disc to nine tracks, the band revisit ‘Cats In The Cradle’, ‘Would You Like To Be There’ and ‘No One Survives’ in an acoustic format, just because.  Although not essential to the overall package, each one results in a good performance (the bass playing on ‘…Be There’ is particularly rather nifty).

Their ability to tap into different areas of hard rock with equally good results stands UKJ in a good position on ‘Stairway To Hell’.  It may not always give the material a strong sense of overall identity but, individually, most of these tracks ensure this is a very strong comeback indeed.  The mature qualities present on the majority of the material is a welcome relief too – there’s nothing here as throwaway as heard in the band’s formative years…and thankfully nothing as flat-out awful as their last attempt at a hit, which involved rhyming “good witch/bad witch” with “fuckin’ sandwich”.  Listening to this release, against the odds, Ugly Kid Joe have a relevant place in the twenty-first century – and it’s a role that’s not just reliant on making a quick buck out of cheap nostalgia.  …And who needs nostalgia anyway?  The realization that ‘Stairway To Hell’ comes just over two decades after UKJ’s breakthrough hit is enough to make anyone feel bloody old.