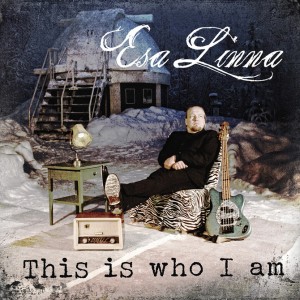 In the summer of 2012, Finnish power pop musician/singer-songwriter Esa Linna released the ‘She’s Not A Human Being’ EP, gaining a few positive notices from genre-specific websites.  On the plus side, Linna more than proved himself in the musical department by playing a variety of instruments himself, while the presence of ex-Jellyfish man Roger Joseph Manning Jr gave things a definite lift.  Less fortunately, the vocals were often a little flat.  Viewing that EP as a sample of future things, is his 2013 record ‘This Is Who I Am’ stronger?

‘Don’t Know What It’s All About’ begins Linna’s full length debut in full throttle, on a pop/rock stomper which revisits the ringing guitar sounds of the 90s and bands like Teenage Fanclub (circa ‘Bandwagonesque’).  The slight edge works excellently against a simple hook, while a strong drum line creates an opening statement which reels the listener in with no messing.  Linna’s 90s style reimagining of 60s power pop has a crispness and a joyousness here that the EP occasionally aimed for…but missed.  Perhaps, more importantly – on this tune and the similarly styled ‘A Drop In The Ocean’ which follows – his previous middling vocal has improved a great deal.  This is partly due to the songs sounding as if they’ve had more time and money spent on their creation, but also thanks to some great multi-tracking going on.  Since both tunes also boast more than reasonable choruses, this particular guitar-pop double-whammy ought to be enough to keep fans of the edgier power pop style listening further.  Better still, ‘DIY’ mixes these elements with slight new wave spikiness, the edgy qualities meeting with another multi-layered vocal, eventually suggesting a strong love of Cheap Trick.   Genre fans may have heard this kind of thing time and again, but it never stops it being enjoyable…and fun.

During ‘New Address Tonight’, Linna’s accented vocal is given a slight echo, over which the guitars are as dominant as before, while a few tinkling keyboards add a late 60s quirkiness. Despite the huge amount of multi-tracking of vocals and instruments (within this kitchen sink arrangement, there’s also a mandolin trying to fight its way out), it’s actually relatively simple slide guitar line which sticks out on early listens.  There’s a lot to take in, and every spin counts; with the meaty mix of pop/rock and dash of attitude, once again, fans of The Posies may find something with which they can connect.  Droning keys mesh with clanging guitars during the mid-paced ‘Progression’, a tune with an odd eerie tone and a hint of sinister prog-rock keyboard work. It’s  could have ended up as a difficult listen, but lurking beneath the barrage of sounds, there are busier moments courtesy of a slightly bendy bassline.  Unlike the previously discussed tunes, the hook here isn’t always as obvious – largely due to there being so much else to take in – but it’s a number which works fine as is.  Also exploring a darker mid-pace, ‘Meat Market’ (a tune previously heard in remix form), stomps along with a marching drum, treated vocal and gothic horror keyboard line.  While far from Linna’s best composition, the chord progression during the chorus provides somewhat of a musical high point.

As with the EP, there’s also time here to explore gentler and more reflective styles.  The slight country influenced ‘Reuna’ is among the weaker moments of ‘This Is Who I Am’, as without the many layers, Linna’s voice is left to stand alone just a little more; although looking past that, there’s a couple of bluegrassy elements which – like most of the musical prowess here – appear well played.  ‘False Flag Show’ shifts from guitar-based thrills to a piano root, with which comes a (very welcome) strong seventies influence.  This, at first, sounds as if it’s going to be softer as the piano lays down a strong foundation against gentle strings and acoustic plucking, with Linna’s accented voice sounding fragile.  It’s all change fairly swiftly, though, as the electric elements kick in. The guitars chime against a thoughtful string counterpart, with the stabbing piano pushed to the rear and a choppy, near marching beat gives things a sense of urgency. Although Linna’s style of songcraft may not always be as slick as that of fellow Scandinavian David Myhr, this eventually blooms into a rather good piece of power pop.

Very little of the music on 2012’s ‘She’s Not a Human Being’ EP prepares the listener for the general scale of this album.  In a very pleasing move, the arrangements here are grander, the vocals sharper, most things just so much better.  If you liked the EP, chances are, you’ll love this…and if you either never heard Esa Linna before – or were unmoved by his previous work – make sure you at least give ‘This Is Who I Am’ a try.  You may be surprised.