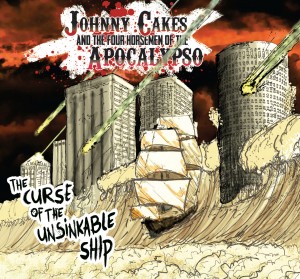 In 2010, Real Gone received a sampler of punk and ska bands from the US.  As always with compilation discs, it was a mixed bag, but a few bands really stuck out.  One of those was Johnny Cakes & The Four Horsemen of the Apocalypso, a band mixing ska, punk and calypso sounds.  After hearing a few more tracks via their Bandcamp page, JC seemed to be a particularly accomplished band whom, crude humour aside, had the potential to stand proudly alongside Reel Big Fish and a couple of the other better known bands from ska’s third wave.

Despite that feeling of promise, their 2013 release ‘Curse of the Unsinkable Ship’ is a huge disappointment.  There are glimmers of good playing: the bass is nice and prominent throughout, the horns are tight and – for the more undemanding – those sunny ska grooves are intermittently entertaining.  There are huge problems with Johnny Cakes’ sound, though – and this is something that becomes glaringly obvious when not just cherry-picking single tracks.  Firstly, Dr. Ostrich’s vocal style isn’t that enjoyable beyond short bursts.  At his best, he sounds like The Bosstones’ Dicky Barrett in a very tired mood, literally phoning in a performance; at his worst, like a bad white rap guy from a truly awful US comedy skit.

Secondly, the song writing is poor.  Not just a bit lacking, but poor almost to the point where once the skip button has been hit, it’s all too easy to forget what you’ve heard.  This supposed concept album takes in pirate moods (which Mad Caddies deliver in a far superior way), tales of work accidents and the recurring appearance of a bee truck, each adding up to something which – surely even the band will admit – is utter nonsense.  This could perhaps be be forgiven if any attempts at chorus writing were anywhere near memorable, or the attempts humour were actually funny.  Sadly, JC’s humour is levelled at nineteen year old man-boys who likely think Tenacious D are somehow valid.  This addition of crass humour does nothing to make Johnny Cakes any more endearing to those listeners with any brains.  Amongst other things, you’ll encounter tales of sexual lewdness (‘Devil’s Threeway’) a country hoedown ode to going to the toilet (‘Ode To The Men’s Room Stall’) and, perhaps worst of all, Kermit The Frog waxing lyrical about things he’d like to do to Meryl Streep (hidden track ‘Interlude, part 2: Pig Fucker’).

If not for the bad language, Johnny Cakes could be moulded into another of Disney’s pet ska bands along with Suburban Legends, as is their overall lack of edge. This is an unbelievably annoying album.  the bassist and horn section in particular are wasted churning out this childish, third rate ska. This ship is not unsinkable: frankly, they’d be better off taking their talents elsewhere before the “joke” wears even thinner.