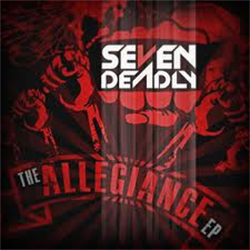 The title cut etches the band’s intentions in stone.  With comparatively no messing around, the five musicians tear into a riff that comes across with those aforementioned Pantera-esque groove metal tones, peppered with a little classic eighties thrash thrown in for good measure.  Vocally, a huge chunk of the number is carried by a clean filtered, yet incredibly melodic voice. However, those who like things with a bit more attitude need not fear, since this is soon counterbalanced – again, in classic metalcore fashion – by a throaty rasp, part melodic death metal, part Phil Anselmo at his most confrontational.  It’s when those vocals really kick in against the choppy riffs that Seven Deadly’s real power is felt.  [A bonus track features an acoustic take of this number, which while an interesting alternative, does not work as effectively.]

With the aid of a hefty double bass pedal and even heftier riff, ‘Blood on Your Hands’ at first evokes a similar feeling, but adds extra textures in places via a fantastic twin lead guitar sound.  It is during this particular number Archie Wilson’s choice of vocal style appears at its most complimentary, fronting a band who’ve pitched the perfect balance between sheer power/groove metal force and classic metal-fuelled melodies.  As before, though, it’s not too long before the harmonious counter melody shows a strong love for Killswitch Engage and their ilk.  Proving you can’t fix what isn’t broken, ‘End of All’ follows in a very similar vein to begin with, though repeated listens uncover what is a much more intense vocal, while the closing section presents more of an atmospheric approach, as cleaner rhythm guitars pave the way for a terrific old-school guitar break.  As it pulls to a close, there’s a sense of leaving the listener wanting more.  If this was the band’s intention, it’s a resounding success.

The EP’s strongest number ‘From This Darkness’ opens with another sledgehammer riff delivered with downtuned/muted strings and a full compliment of double bass pedals from Rob Hicks’s drum kit.  Just as it feels as if Seven Deadly are about to beat you into submission, there comes a truckload more melody than perhaps was first suggested.  The previous vocal filters are used, though more effectively.  The twenty-first century near-djent riffing is balanced out very well indeed by the presence of a few old-school guitar chops, particularly during another well-executed lead break.  While it takes a few listens to fully appreciate, the end result sounds like the work of a seasoned metalcore band and not something appearing on a debut release.

While this EP’s four tunes may not always demonstrate a great musical range – those lead breaks suggest guitarists H and Dave are capable of broader styles than they get the chance to show off here – they do very much showcase a bunch of guys who are exceptional musicians within their chosen niche.  That level of musicianship and a whole world of attitude makes ‘The Allegiance EP’ a decent first outing which should be checked out by most metal fans.