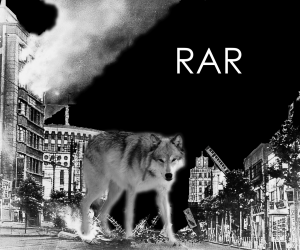 An instant classic, ‘A Versus E’ captures a far more tuneful DWC than ever before.  A meaty bass part carries most of the tune, while the guitars chime in a traditional alt-rock fashion.  Somewhere between the two, a soft voice cries and echoes, and the end result is a rather fine piece of goth pop; it’s 90s influences wholly nostalgic in their execution.  If the band’s debut had occasionally hinted at wandering shoegaze indulgence, there’s very little of that here.  Although still remaining a touch more ragged, the combination of Martha’s solid bass and John Othello’s wistful tones puts the band closer in line with the US’s finest exponents of gothy-pop retroness: The Pains of Being Pure at Heart.  …And, obviously, that is something to celebrate.

Those who loved the noisier parts of DWC’s previous recording will find plenty of solace in ‘Bring Down The Banks’, a short, distorted burst of energy combining a world of aggression against some superb hi-hat work, leading up to a drumkit being smashed into oblivion. Similarly ferocious, ‘MBE’ represents almost three minutes of loud, grinding guitars, under which the rhythm section is tight.  Fighting his way past the lead guitars, John wails and screams as if his life depended on it.  It’s noisy enough – and gives a hefty nod to the likes of My Bloody Valentine.  It’s good enough in its overall aims, but doesn’t leave as lasting an impression as some of the tracks featured.  Also recalling previous work, the excellent ‘Strange Letters’ finds Serra pounding out a mechanical beat against clanking and chiming guitars, before falling away to reveal a warm bassline and multi-faceted vocal, combining off-key wails with an unnatural coldness.  In terms of all round influence, you may hear a trace of the earliest Smashing Pumpkins in the bass, but this is swamped by the kind of inhuman mechanics practiced by Wire, while, as always, the sheet of guitar noise more than hints at a love of all things shoegazy.

After a brief intro where the guitars offer almost a metronomic style, ‘Guerrero’ opens into a word of indie rock that needs a few plays to uncover each of its many elements.  The drums feature more hi-hat work, which soon appears wholly complimentary to the disjointed – near spoken – vocals, while a sea of fuzz-bass powers its way to dominance.  Like the album’s first single ‘Strange Letters’, this is a number which takes the most typical elements of DWC’s debut album and recycles them into a tune that’s superior to most of their prior work.  Also worthy of mentioning, the restrained use of piano during ‘The ABC of Being Stupid’ brings something else new to the table. Its singular notes pierce through the drones and squalls like something from The Cure circa ‘Seventeen Seconds’, a musical flourish at its most basic, and yet, it absolutely lifts the piece just with its occasional presence.

Overall, ‘RAR’ does everything a second album should: it takes the strongest moments of the band’s prior work, shapes them into something better, adding new layers…and in this case, a more of a commercial edge in a few places. The rhythmic sharp edges appear a tad sharper, the band’s playing arguably better.  For those looking to just dip in, ‘A Versus E’ and ‘Go!!!’ are enough alone to warrant Dead Wolf Club some extra attention, but  for those already familiar with the debut ‘RAR’ offers more than just a couple of standouts, aside from a couple of missteps, in terms of distorted DIY riches, there’s a lot to love here.