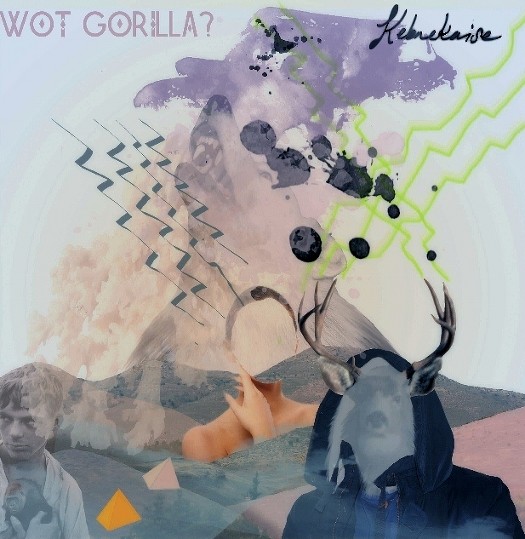 Although they take their name from a classic mid-70s Genesis instrumental, no further comparisons with the UK’s arguably most successful prog-rockers-turned-stadium-rockers should be sought from the work of Halifax-based band Wot Gorilla?  Yes, the complexity of their sound could be considered progressive, but always progressive in a math/art-rock way as opposed to a “classic” prog approach.

‘Kebnekaise’ (the band’s full-length debut, following two self-released EPs) presents a world of arty, jazzy, angular and occasionally noisy sounds which somehow come together effectively to create a challenging kaleidoscope of art-rock.  As if Tubelord decided to collaborate with Animals As Leaders, members of Mr Bungle and King Crimson, the results are often amazing.

The opening instrumental ‘I Beat Up The Bathroom, I’m Sorry’ shows an incredible musical tightness.  To begin with, guitarist Ben Farnell plays a jazzy riff mixing finger-picked musical motifs with a little tapping.  His tone is superb.  The drums – again slightly jazzy – make excellent accompaniment, as Si Marks offers percussive fills and a funky groove.  As the electric guitars crash in (albeit briefly) things become more of the common or garden indie rock variety, before sliding almost seamlessly into the oddly titled ‘Melted Welly’, where Marks really gets the opportunity to cut loose and show off his talents.  Again, a hefty mix of jazz, funk and rock creates an impressive rhythm from which the rest of the band can build.  Farnell’s guitar parts are an obvious extension of the earlier instrumental, while the tune has an abundance of rhythmic changes (and stops), never appearing fully settled.  Mat Heigh’s lead voice is of the slightly nasal, higher pitch indie variety – similar to Tubelord’s Joseph Prendegast – which will provide enough leverage for younger listeners to remain convinced that (much in the same way they feel about Radiohead), Wot Gorilla? are not a prog band.

‘Suspects’ takes Wot Gorilla?’s core sound an pushes it a touch farther.  From the avant-garde approach during the intro – featuring some almost ridiculous stops – the band move through musical passages where the vocals meet with more ringing, jazz-edged guitar lines, before tackling various off-kilter funky grooves tempered with brief spells of anger.  It’s challenging and sounds like it could fall apart at any time, yet the band always manage to keep things together in a most impressive way.  The bouncy ‘Holy B’Jesus’ is one of the most accessible numbers, at first working around a solid indie groove with jangling guitar work.  Like the rest of Wot Gorilla?’s work, however, it doesn’t stay that way for long: by the middle of the track, they’re throwing in odd time signatures, lolloping across slower riffs, and generally being all arty.  The final section of the number proves one of many highlights of ‘Kebnekaise’, featuring some superb hi-hat/percussion work and a warm bassline, before careening into a wall of noisy indie-rock guitars that – before long – hammer the same chord until coming to a jarring halt.

Moving away from the arty and farther towards the aggressive, lead single ‘Snow White’ eschews the jazzy, finger-picked guitar parts at first for some noisier alt-rock chops.  To balance out the (relatively) simpler sounding arrangement, Jonny Hey’s bass parts are pushed right up front and the end sound is impressively chunky.   Just as the indie rock gathers momentum, it’s all change for a rather pointed, jazzy tune, which sounds like one of the best things Tubelord never recorded.  These two contrasting styles would be enough to ensure ‘Snow White’ left an impression on its listening audience, but to finish, Wot Gorilla? take things a step further with a brief moment of extreme metallic riffing.  A good way to finish this musical journey.

If there is any downside to this release at all, it’s that there’s a bit too much of a kitchen sink approach to most of the tracks.  Perhaps breaking things up a little would have given the album more of a varied feel, overall.  It could be argued that it’s all so impeccably played, that the sheer complexity of the material constantly showcases a band sticking rigidly to their best strengths – and that’s an argument which certainly holds true.  That complexity, however, will make the album somewhat challenging to get through in one sitting for some.  For the more patient, however – and for those math-rock and art-rock devotees (for most of whom, “progressive rock” are likely dirty words) – ‘Kebnekaise’ is a cornucopia of twisted musical delights.