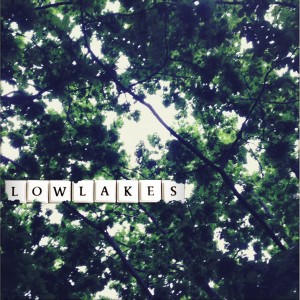 Australian four-piece band Lowlakes were born from the ashes of a band called The Moxie.  Relocating from Alice Springs to Melbourne, vocalist Thomas Snowdon, bassist Bill Guerin and drummer Jack Talbot decided a fresh start was necessary.  Under their new moniker of Lowlakes, these three musicians teamed up with guitarist Brent Monaghan and decided to explore music with a sense of atmosphere.

On their debut EP, the music creeps into the listening spectrum very gently.  Monaghan’s clean toned guitars lay a foundation over which single piano chords are played, gently, creating something so simple, it leaves the listener to wonder where things are headed…And then Thomas Snowdon begins to sing.  His opening statements on this release comprise of a few wordless vocal sounds, strong yet somehow unsettling, a little grating even, not necessarily what such music required at all.  By the time he breaks into the opening verse properly, there’s just too much of a leaning towards the hugely, hugely overrated Jeff Buckley in his delivery.  It almost stops ‘Song For Motion’ in its tracks.  Despite this, that atmospheric tune bubbles away beneath, until finally revealing a warm bass and soft percussion.  Snowdon’s voice stays in the centre of it all – far, far too high in the mix – and for those whom dislike Buckley Jr, this could prove a huge stumbling block with regard to Lowlakes…

…That is, at least to begin with.  Somehow – feeling like nothing short of a miracle – by halfway through the EP’s second offering ‘Catch The Breeze’, his voice sounds more palatable. This, perhaps, has a lot to do with the rest of the band.  Here, they adopt a musical stance that’s more immediate than before – a fuller, if never truly busier sound – which helps fill the previous gulf between voice and music.  Jack Talbot’s drums lay a solid base over which the bass, which rumbles unassumingly throughout.  As before, most of Monaghan’s guitar parts are concerned with filling space in their own equally spacious way as opposed to any kind of big riffs, but it’s an approach which definitely works.  Even the falsetto vocals sound like a natural accompaniment.

The rhythm section gets their “big moment” on the relatively upbeat ‘Buffalo’.  Both the bass and drums come in a more indie-rock style as opposed to previous dreampop experiments.  While there’s nothing obviously complex about either the drum parts or basslines, both have an enjoyable quality.  It’s great to hear the bass really high in the mix, which goes some way to carrying the tune briskly for just almost four minutes.  While it may not have the overall sense of atmosphere or invention for which Lowlakes prove capable elsewhere, its upbeat edges make it this EP’s most immediately accessible track.  ‘Arctic House’ brings together the best elements of ‘Catch The Breeze’ and ‘Buffalo’.  The rhythm has an almost metronome feel, but over that, the sparse guitar parts and bass rumbles hold the attention well.  There are fleeting moments here which make Lowlakes sound like they are about to break into one of ‘The Joshua Tree’s more spacious numbers at any second, though that’s not to say they sound particularly like U2…it’s more of a mood thing as opposed to an obvious style.  Throughout, the repeated line of ‘would you believe it’ (where Snowdon sounds like some kind of oddball Buckley/Nina Simone hybrid) constantly threatens to reach a climax, but the track fades, leaving Lowlakes to disappear almost as unobtrusively as they appeared over the musical horizon about twenty minutes earlier.

This EP is an interesting release: at first it sounds like it is going to be hard listening…and then things slowly fall into place.  There’s a nice warmth hiding within a lot of Lowlakes’ arrangements which eventually turns out to be a great strength.  There’s a strong temptation to call ‘Lowlakes’ (both the EP and band) “a grower”; there are some lovely basslines throughout, but with that vocal, they’re unlikely to win mass appeal.  Still, they’re likely to happy creating music on their own terms and winning a decent cult audience.