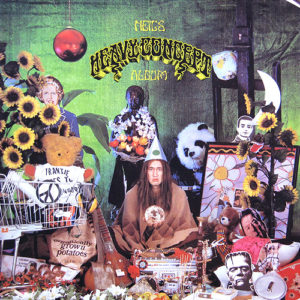 The album begins with an apology from neil, explaining how the album turned out nothing like he’d wanted, before launching into a cover of Traffic’s ‘Hole In My Shoe’ (a number 2 hit in the UK in 1984; it held that postition for three weeks, having been held off the number one spot by Frankie Goes To Hollywood’s ‘Two Tribes’). Despite a nasty synthesised sample of an elephant, this arrangement of ‘Hole In My Shoe’ is fabulous and very faithful to the original. Dave Stewart’s production is fantastic, as it is throughout the rest of the album. It’s such a pity this only became a huge hit due to its so-called novelty potential.  After neil falls down the sink and has a conversation with a mouldy potato, we are treated to a rendition of ‘My White Bicycle’. Frankly, the pace of the arrangement here runs rings around the original version (recorded by Steve Howe’s old band Tomorrow, in 1967), which in comparison sounds slow and a little clumsy. A couple of the eighties keyboard sounds used here date the arrangement a little, but it’s a minor complaint, as this is fabulous and one easily one of the album’s best tracks. Stewart’s use of piano in a theatrical, almost slapstick style near the close of the song is a fabulous touch.

At this point we come to the first song specifically written for the LP. A spoken word intro (‘neil The Barbarian’), concerning neil eating meat and turning into a crazed maniac –  read by Nigel Planer’s brother Roger with a deep husky voice in the style of a horror film trailer – kicks into ‘Lentil Nightmare’, a proto-heavy metal tune which references King Crimson. Written by Planer with contributions from Rik Mayall, it’s another musical high point. Bryson Graham (ex-Spooky Tooth, Girl), turns in a top drum performance here as a “heavy metal drummer”. Soon to become prog rock legend, Jakko Jakszyk churns out heavy metal guitar riffs and Planer squeals in over the top falsetto. neil, meanwhile, is amidst a breakdown and smashes his room to pieces in a meat-crazed frenzy. The whole thing is narrated superbly by Stephen Fry in suitably over the top style. It closes with neil feeling disappointed that he’s smashed everything to pieces, but not feeling sorry about smashing horrible computer alarm clock his brother gave him for Christmas…

A cover of Pink Floyd’s ‘The Gnome’ is up next (a number supposedly sung by neil’s rubber plant Wayne, whom neil has just read a poem and had a chat with, as you’re supposed to talk to plants) and again, it fits the mood of the album well, sticking closely to Syd Barrett’s original psych-pop blueprint. As with the piano on ‘Bicycle’, Dave Stewart and his team can’t resist some extra fun, though; here, some jaunty trombones come in at the end for a bit of cabaret style fun [the brass is played by Annie Whitehead – known for her work with National Health and Robert Wyatt; she makes a couple of other appearances on this album later on]. ‘Cosmic Jam’ closes the first half and while it adds nothing musically, it features the best joke. neil discovers a piece of psychedelic music, presumably arranged by Stewart, which is essentially just some gentle drumming and a trippy bass loop, augmented by vibrato guitar work. He says he could ‘listen to it all day and never get bored’ – only to change his mind ten seconds later to proclaim it ‘quite boring’ and something which ‘makes him feel quite sick’. That never fails to amuse me. The track is then spoilt a little by including a rather crappy joke about the record being scratched. If only there was still the original instrumental track somewhere in the archive…

The second half kicks off with a spritely version of ‘Golf Girl’ (originally by Canterbury Scene legends Caravan). Musically, it’s not too far removed from the original, so much so that Caravan’s Jimmy Hastings plays the piccolo here, as he did on the ‘Land of Grey & Pink’ LP. Anyone who’s heard this will always have the compulsion to add a couple of neil’s enthusiastic vocal interjections whenever spinning the original version, such has it left its mark. Sadly, something which would have otherwise been brilliant is a rather spoilt by some comedy adlibs and Dawn French’s appearance as a fascist policewoman at the end. Not entirely necessary. We’re next promised that neil will bring his album back to acoustic basics – a plan thwarted by his mother (played by Dave Stewart’s wife and long time musical partner Barbara Gaskin). She turns this track (‘Bad Karma In The UK’) into incredibly bad synth-led rap. It provides some amusement, but ultimately ends up being the most dated thing on offer and after a couple of listens could be somewhat grating.

At this point, the album loses its way briefly, as neil tells a tale of a girl who caught flu off her boyfriend’s Sony Walkman (how very 80s!) and how they ended up hating each other after he started eating meat; he then sings an acoustic ditty about a man who hates him (‘Ken’ – something which also features in ‘neil’s Book of the Dead’, although worded more strongly). As if realising the album’s losing its way again, neil finds himself at a crossroads which leads to ‘The End of the World Cabaret’. Here, Planer plays a cabaret singer, reprising the voice of the character he used for the Dicky & Dino skit in the “Young Ones” episode ‘Bomb’. The cabaret man believes himself to be suave, but in reality, he is a twat. He and neil launch into a cocktail cabaret version of ‘God Save The Queen’ (yes, the Sex Pistols song). What’s of most interest here is that this was recorded well over a decade before Richard Cheese made such re-imaginings fashionable – but it’s hardly likely that Planer’s ever going to get any credit for his hand in establishing this ironic style. It’s interesting to note that the cabaret drums could be played by Pip Pyle from Caravan [That’s “could be”, as it might or might not be him playing here; he could just as easily be playing the cabaret style drums at the end of ‘The Gnome’ – annoyingly, the original LP’s sleeve notes give no real indication of where and when, but only that Pip plays “drunken cabaret drums”.  Whatever, it’s another legend on the guest list.]

neil escapes the explosion of the end of the world by floating in the air…which leads into the album’s last great (and finest) moment – a fantastic cover of Donovan’s ‘Hurdy Gurdy Man’. Here, the superior Steve Hillage arrangement of the song has been chosen (far preferable to Donovan’s flimsy record), but has been beefed up slightly. Although partly singing in character as neil, this is Planer’s best performance. The musicians involved are at their best too – the bass noise throughout the second half (either played by Dave Stewart or Rick Biddulph – again, it’s not clear from the sleeve notes) is great, adding plenty of extra depth, leading to a wobbly other-worldliness.  It’s such a shame that since many of his peers were involved that Hillage himself is notable by his absence…

‘Paranoid Remix’ reprises some of the key moments from the album (listen carefully, you’ll also hear a sample of Bob Monkhouse!), before settling into ‘Amoeba Song’ – the most unashamedly hippie song here. A cover of one of the sections from ‘A Very Cellular Song’ by Incredible String Band, it’s hardly essential, but at least it’s in tune – unlike the original, which sounds truly horrible decades after its inception.

The original cassette version of the album – if you’re lucky enough to find one – features a few extras. ‘Cassette Jam’ follows ‘Cosmic Jam’ and has neil explaining how the whole joke about the record being scratched doesn’t work if you’re listening on cassette before imitating the sound of a cassette getting tangled; A cover ofThe Rolling Stones’ ‘Brown Sugar’ played by some buskers (Rowland Rivron and Simon Brint, aka Raw Sex) gets cut short after neil complains about its subject matter (“I thought this was about whole foods”); ‘Go Away’ follows ‘Amoeba Song’ and features neil getting stroppy as “that was supposed to be the end and just because the cassette’s still running [we] shouldn’t expect anything extra”. He then begrudgingly plays ‘Hurdy Gurdy Mushroom Man’ (the b-side of ‘Hole In My Shoe’), a likable hippie song, if a little silly. It’s not really essential listening.

The original release has one major flaw in that there just aren’t enough detailed sleeve notes. The musicians are listed under two separate camps: beautiful acoustic musicians and horrible electric musicians. There’s no indication as to who plays on each track. Some musicians’ contributions are fairly obvious (Pip Pyle being credited as “drunken cabaret drummer” for example; but even that’s not completely clear, as he could appear in one of two places – possibly even both). With others you’re left guessing as to where they appear; the best case being Gavin Harrison, who is credited as “flash studio drummer”. Let’s assume that means he played most drum parts not obviously played by Pip Pyle or Bryson Graham [although Dave Stewart is also credited as being a drummer on the album too – albeit “useless drummer”, so it’s a complete mystery as to where and how much he actually played drums]. And yes, the Gavin Harrison on this album is the Gavin Harrison most famously associated with Porcupine Tree! Although this album is not mentioned in Gavin’s online discography, it’s definitely him, since the discography mentions later work with Stewart, Gaskin, Biddulph and Jakszyk.

If you’re a fan of The Young Ones and have never heard this album, then you need to. Just as importantly, if you have an interest in the Canterbury Scene and the musicians involved then it’s worth investigating too. Despite the comic nature of some of the material, everyone turns in fantastic performances.  While this album was meant to represent neil’s musical tastes, there’s something so loving about the musical homages between the silliness, you’ll very much hope it all represents Planer’s own tastes too.  That’s a great thought, isn’t it?